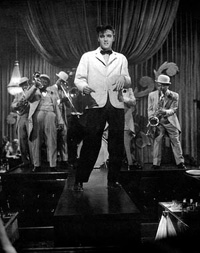 “King Creole” is arguably Elvis Presley’s best film. This may sound like a dubious achievement but “King Creole” is a movie that you do not actually have to be an Elvis fan to like. The film has a lot more going for it than most Elvis films. A good solid Hollywood director in Michael Curtiz, the man responsible for made “Casablanca,” “The Adventures of Robin Hood,” “The Sea Hawk” and so many others.  A cast of actors that would do any film proud including Walter Matthau, Vic Morrow, Dean Jagger, Dolores Hart and the wonderful sexy off beat Carolyn Jones…and of course, Elvis. Also contributing is Russell Harlan’s moody photography that captured the seedy French Quarter atmosphere so well.

“King Creole” was only Elvis’ fourth film and the last before military service cut his hair and other more vital organ parts, at least symbolically. The music was still good (King Creole, Hard Headed Woman, Trouble) and had yet to disintegrate into fetal filler like “It’s A Dog’s Life” and “Song of the Shrimp,” that would become typical of his movies within only a few years. The movie was based on an early novel by Harold Robbins, one of the most successful authors or the 1950’s through the 1970’s. Robbins works included “The Carpetbaggers,” “Never Love a Stranger,” “Where Love Has Gone” and “A Stone for Danny Fisher,” all eventually made into movies. “A Stone for Danny Fisher” was retiled “King Creole” when adapted into a screenplay (co-written by Michael V. Gazzo) for Elvis. The location was changed from the streets of New York to New Orleans to accommodate Elvis’ southern accent and of course, now Danny can sing. 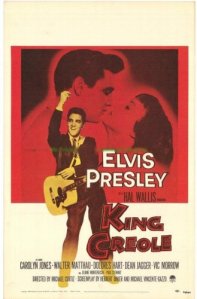 Danny Fisher is a high school student just about to graduate when family problems, his dad is out of work, and a hot temper result in Danny dropping out of school and falling in with a group of young punks who plan to rob a five and dime store using Danny’s singing skills as a diversion. The punks, lead by Vic Morrow, as Shark,  work for Maxie Fields (Walter Matthau) a minor local hood who owns a club where Danny works mopping and sweeping because his father can’t hold down a job.  Danny leads a double life. There’s Ronnie (Carolyn Jones), Maxie’s kept woman, who is attracted to Danny and Danny is attracted to her, as he is to Nellie (Dolores Hart), a nice girl Danny meets at the five and dime store he was mixed up in robbing. There’s also, Charlie LeGrand (Paul Stewart), a honest rival club owner (he owns the King Creole) of Maxie’s, who gives Danny a break singing there, and then there is Maxie Fields, a viciously vile and abusive thug representing the dirtier underworld  side of the nightclub life. Danny is pulled in both directions; the unhappy Ronnie abused and used by Maxie and the sweet more innocent Nellie, the nice girl who a good life can still be possible with.

“King Creole” would be Elvis’ last ‘rebel without a cause’ style film. He would go into the army an anti-hero and when he came out two years later, like Samson once his hair was cut, he lost that rock and roll spirit. He turned into a cleaner cut friendly all American Elvis, a pod that would carry him through approximately thirty more films with little or no redeeming value.

King Creole has plenty of good moments in it like the opening scene; we see the wet empty streets on an early New Orleans morning. A black woman, riding in a wagon calling/singing out “Crawfish” as she slowly strolls the empty street. “See I got’em, see there size, stripped and cleaned before your eyes”.  A bongo beat begins and suddenly from up on a balcony above we hear Elvis sing out “Crawfish,” back and forth with the black woman.  What great opening scene. There a lot of other good stuff in this film, Elvis in a switchblade fight with Vic Morrow and his gang; Walter Matthau’s performance as the slimy hood Maxie Fields;  Elvis singing “Trouble” on top of a bar proving to Maxie that he can sing and Carolyn Jones giving another great performance as a sensitive good-hearted loser.

It’s sad that Elvis rarely got to use his acting chops again (only in Flaming Star did he have that chance). In “King Creole” he shows flashes of acting talent that if nurtured could have potentially gave us some memorable performances. At one time or another Elvis was considered, or offered such roles as Joe Buck in “Midnight Cowboy” and the Kris Kristofferson role in the Streisand remake of “A Star is Born.”  It would have been interesting to see what a director the caliber of a John Scheslinger could have done with Elvis.