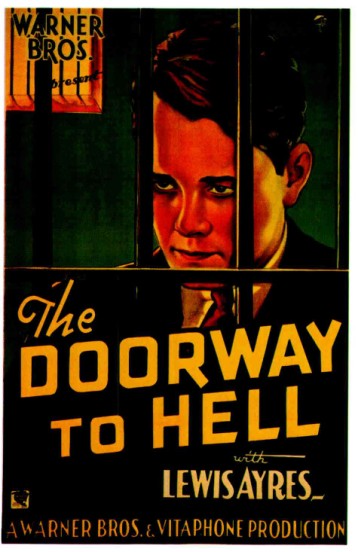 In Doorway to Hell, Lew Ayres plays gang leader Louis Ricarno who organizes the mob in order to eliminate inter-gang warfare. After the organization is set up with Ricarno in charge, he decides he wants out of the rackets. Discontented gang members don’t like the idea and kidnap Ricarno’s young brother. The kidnapping goes bad when the boy is killed and Ricarno is drawn back in for revenge. The film is entertaining enough, however it is dated much more than other gangland films of its era. Lew Ayres comes off unconvincingly as a gangster, and most of the cast, with the exception of sixth billed James Cagney and Dorothy Mathews who  plays Ayres wife, and is Cagney’s lover, are still in the silent film mode of over acting. Cagney lights up the screen as Ayres right hand man, Mileaway, who takes over the boss’ position upon Ayres departure. Director Archie Mayo keeps most of the violence in long shot or off-screen. The gang warfare scenes right after Ricarno retires are almost comical.  Still the film is entertaining and worth watching from a historical perspective, and especially to watch the young Cagney tear up the screen and for the “shocking” scene in the taxi cab where Mathews removes her marriage ring while cozying up to Cagney.  What’s most interesting is how much Cagney’s charisma shines, just as it did in another early role in “Sinner’s Holiday.” His personality just about over powers everyone else on the screen.