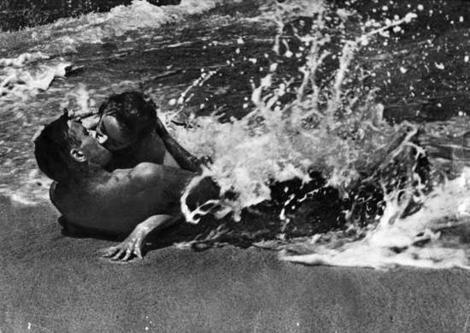 Based on James Jones massive bestseller, Fred Zinnemann’s film version of “From Here to Eternity” won eight Academy Awards out of 13 nominations including Best Picture, Director, Supporting Actor and Supporting Actress. Daniel Taradash, who wrote the screenplay, and won an Oscar, does a magnificent job of reducing Jones more than 800 page novel into a two-hour film. The film had to be toned down for both sex and its anti-military sentiment. The latter, so Columbia would receive cooperation from the military and the former due to the restrictions of the then in force production code. 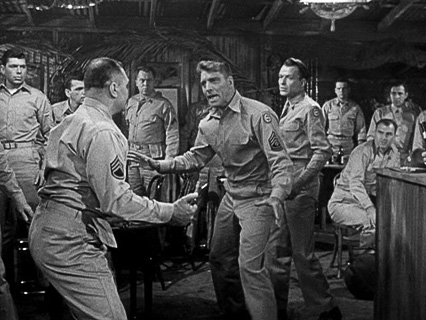 The story begins with the transfer of Private Robert E. Lee Prewitt (Montgomery Clift) to a rifle company headed up by Captain Dana Holmes (Philip Ober). When Holmes learns of Prewitt’s ability as a boxer, he wants him to join the company’s boxing team. Prewitt, who previously blinded another boxer in the ring, does not want to box. Holmes First Sergeant, Milton Walden (Burt Lancaster), he actually runs the unit for the ineffective Captain, suggest that they make “life” difficult for Prewitt forcing him into submission by getting other non-commission officers under his command to help “persuade” him to box. Prewitt is a man who goes his own way and can take whatever is dished out by the Sergeants, still refusing to box. Walden in the meantime has his eyes on the Captain’s beautiful neglected and unhappy wife, Karen Holmes (Deborah Kerr) and they soon begin an affair. Prewitt meets an old friend, the streetwise loser Angelo Maggio (Frank Sinatra). Together they go out to the New Congress Club, a dance club where they can meet girls. It’s here Prewitt meets Lorene (Donna Reed). While at the New Congress Club, Maggio, having too much to drink, gets into his first altercation with Fatso Judson (Ernest Borgnine), the sadistic Sergeant in charge of the Stockade. The fight is quickly broken up by Prewitt. Walden and Karen meet at a secluded beach for a romantic interlude. Here Karen tells Walden how early in her marriage she discovered her husband’s philandering and that during one of his more violent drunken episodes she miscarried their child and now is unable to bear any more children.

At Choy’s bar, a drunken Maggio gets into another mix with Fatso, who pulls out a switchblade. Walden, who is watching, breaks a beer bottle in half and steps in between the two. He tells Fatso, if he wants a fight, fight with him. Fatso backs down, promising Maggio that someday he will get him, saying his type always end up in the stockade eventually. Prewitt and Lorene continue to see each other. She tells Prewitt her real name is Alma and gives him a key to the apartment she shares with another girl. Prewitt’s harsh “treatment” by the non-commissioned officers continues however, he continues to take it never complaining. On another night’s leave, Prewitt and Maggio get ready to go out on the town, only Maggio is slow in getting ready and is the last man in the barracks when the Officer of the Day grabs him for guard duty. Upset Maggio goes AWOL while on guard duty and is quickly arrested and court-martialed. He is sentenced to six months in the stockade where he comes face to face with Fatso and his billy club. Karen wants Walden to sign up for officer training school so he can be transferred back to the states. She will then divorce Holmes and they can marry. Walden who hates officers reluctantly agrees.

Prewitt is forced into a fight with one of the Sergeants from the boxing team. A group of soldiers gathers to watch, including Captain Holmes, who does nothing to stop the fight until the Sergeant starts losing. Senior officers have been watching from afar wondering why Holmes is not stopping the fight. A few nights later, Walden and Prewitt are sitting on the side of a road drunk when Maggio, badly beaten up, appears. He escaped from the stockade not being able to take Fatso’s brutal beatings anymore. Maggio dies in Prews arms. The following night, Prewitt looks for Fatso and finds him coming of out the New Congress Club. Switchblades are drawn and Prewitt knifes Fatso to death however, Prewitt has been stabbed badly too. Wounded he makes his way to Lorene’s apartment where he remains as he recuperates.  Walden covers up for Prewitt’s AWOL for the next few days. Meanwhile, Karen asks Walden if he submitted his application for officer training and he tells her he did not. On the eve of December 7th, they split up realizing their dreams of a life together could only be a fantasy.

The Japanese attack Pearl Harbor the next morning. Prewitt, still recuperating at Lorene’s, hears on the radio about the attack and realizing his duty as a solider wants to get back to Schofield Barracks. Lorene pleads with him not to go; after all, what did the Army ever do for him, other that treat him like crap.  As he tries to sneak back to the base, Prewitt is shot by a nervous guard when he does not stop after several cries of halt. When Walden arrives, the guard asks why didn’t he stop? “He was just too stubborn!” Walden replies.

A few days later, Karen and Lorene are evacuated by ship. As they leave the port heading back to the states. Lorene tells Karen her fiancé was a pilot who shot down during the attack. However, Karen recognizes Prewitt’s name realizing Lorene’s fantasy ending.

For me, the key role in “From Here to Eternity” is that of Robert E. Lee Prewitt, as portrayed by Montgomery Clift. It is Prewitt who drives what I see as the major theme of the film, that of how does someone maintain his individuality in a system that demands conformity.  Prewitt will not turn his back on his own moral code, not even for the Army that he loves so much.  Walden knows how to play the game; in the military there is no room for individuality; you must conform for the good of the “team.” He sees Prewitt as just being stubborn.  Prewitt’s rebellion is that of a person who knows who he is in life. Unlike Brando’s  50’s rebels  in “A Street Name Desire” and especially in “The Wild One”, Prewitt is not rebelling just for the sake of rebelling, he is standing up for his own principles which are in conflict with the system, in this case, the Army that he loves and wants to be apart of. However, he will not succumb to their demands if it means breaking with his own moral ideas. Additionally, unlike James Dean whose rebellion in both “East of Eden” and “Rebel without a Cause” are both centered on young mixed up teens trying to find themselves by rebelling against ineffective parents. Prewitt is no kid; he knows who he is and what he wants. Prewitt is also representative of director Fred Zinnemann whose main characters often were subject to moral predicaments in films like “High Noon”, “The Nun’s Story” and “A Man for All Seasons.”

Censorship restrictions at the time forced many changes and toning down, from novel to screen. The New Congress Club where Prew meets Lorene, a whorehouse in the book, became a “Gentlemen’s Club” and the girls went from whores to “hostesses.” The affair between Walden and Kerr was a lot more explicit in the novel than it is in the film. Despite the toning down, the movie still steams sex. Deborah Kerr never looked sexier than she does in this movie. We first see her in a tight fitting sweater as she walks around the base looking for her philandering husband and later on in shorts when Walden make an unexpected visit to her house. There is also the iconic beach scene with the ocean’s waves washing over Lancaster and Kerr bodies that steamed up the screen and still does. It is still surprising how much did get passed the censors. This may have been to some extent due to the casting of Deborah Kerr and Donna Reed in the female leading roles. Both women had “pure” screen reputations, so maybe the censors were more lenient or not paying as much attention. After not seeing this film for a longtime, I was surprised by how short the beach scene is, yet it has resonated strongly in our cinematic erogenous zones.

Performances are all around excellent and this is confirmed by the acting awards and nominations the film received. Both Burt Lancaster and Montgomery Clift received Best Actor nominations, Deborah Kerr, Best Actress and Frank Sinatra and Donna Reed both received Academy Awards in their respective Best Supporting categories. Ernest Borgnine deserves much credit for his role as Fatso Judson the sadist stockade Sergeant.

“From Here to Eternity” is overflowing with actors in small roles who would become better known later on, Jack Warden, Mickey Shaunessey, Bruce Cabot, Claude Akins, Joan Shawlee and George Reeves who was already portraying Superman on TV. The novel (1951) was James Jones first, followed by “Some Came Running”, “The Pistol” and “The Thin Red Line.” In all, Jones published 10 books; his last novel was released posthumously after being completed by Willie Morris.  In 1951, the book was the winner of National Book Award for fiction. Jones based “From Here to Eternity” on his own experiences while stationed in Hawaii though most of the story is said to be fiction. It is ranked 62nd in the Modern Library’s list of Top 100 novels. The book is considered, along with Norman Mailer’s “The Naked and the Dead” among the best novels depicting the American soldier in the South Pacific during the World War II era.