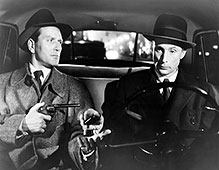 “Roadblock” is a mixed bag with a few twists and turns, one of which almost derails the film’s impact. Still, it has much going for it, namely Charles McGraw, the grizzly voiced stocky handsome tough guy who has graced so many classic noir films. The film is also blessed with the cinematography of Nicholas Muscuraca whose camerawork in film noir is legendary in works like “Out of the Past”, “Cat People”, “The Seventh Victim” and “Blood on the Moon” among others.

The plot is simple, honest cop falls for sexy femme fatale, plans a robbery to get money to support the dame’s expensive lifestyle. Only this time, the femme fatale switches gears in the middle of the film and decides she does not need the fur coats and penthouse. She willing to suddenly settles down with the working stiff in martial bliss. Unfortunately, for the “honest” cop he is already in too deep.

“Roadblock” waste no time as it starts with an enticing opening scene that grabs you and holds your attention from the start as Joe Peters (Charles McGraw) and his partner Harry (Louis Jean Hyendt) fake a shooting to frighten a suspect into surrendering stolen insurance money. After this opening setup, Insurance Investigator Peters heads back to L.A. At the airport Joe meets a flirty Diane (Joan Dixon), who weasels a half price ticket by telling the ticket seller Joe is her husband. On the plane, she purposely sits next to Joe, playing it both cold and flirty at the same time. The plane runs into stormy weather and is forced to make an unscheduled landing forcing everyone to stay overnight at a hotel. Mr. and Mrs. Peters must share a room. Like most noir saps, Joe falls quickly for the seductive Diane, but soon discovers she has expensive taste and is using Los Angeles crime boss Kendall Webb, a suspect in a recent fur company robbery, as her fix. Despite her affiliation with the underworld, Joe is still stuck on the dame and continues to pursue her. His only strategy to get enough money to support her lifestyle is to plan a robbery using inside information he has about a train carrying over one million dollars in cash with the help of Webb and his men to pull it off. For his part Joe gets a percentage of the action. With the robbery set to go, an unexpected turn happens when Diane, realizes she’s in love with Joe and living on a cops salary is good enough. Joe tries call off the robbery but it is too late. While Joe and Diane are on their honeymoon the robbery goes off without a hitch. When Joe receives his share of the money, Diane is stunned that he was involved. The insurance company assigns Joe, and his partner Harry, to the case. He attempts to lead the investigation away from him and his partners but one of the robbers is arrested and talks. The couple are now are on the run, as his partner, Harry has figures out Joe is implicated in the robbery and is tracking him down. There’s a climatic car chase through the streets of L.A. ending with the shooting of Joe in the middle of a dry Los Angles riverbed.

Like many men of noir who came before him, Joe Peters downfall is due to the lure of sex and money. A duplicitous woman making a man’s head stop thinking straight. Peters loins were hot for Diane from the moment he sees her in the Airport terminal. One of the real treats in this film is seeing tough guy McGraw act with almost childish glee when Diane, trying to get her cheap plane ticket, points him out and waves while talking to the ticket seller.

Charles McGraw’s career began when he went to New York; he actually hitchhiked there, and soon got a role in the hit Broadway play “Golden Boy” with John Garfield, Luther Adler and a young actor who would become better known later on as a great director, Elia Kazan. He parlayed this early success into as film career when he soon after headed to California, signing a contract with Howard Hughes RKO Pictures and began a career that would last until his premature death in 1980. His big break came in 1946 in “The Killers” where he played Al, one of the two hit men looking to off Burt Lancaster. With his rough voice and stone like face, McGraw was perfect for the shadowy darkly lit wet streets that would mark film noir. 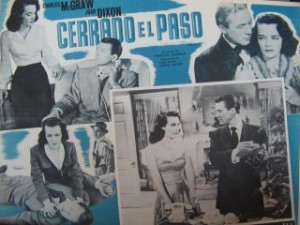 The unconvincing transformation of Diane from a gold digging femme fatale to decent woman in love with her regular working stiff is the weakest link in the film, a femme fatale who credentials disappear halfway through the film. The problem is twofold, it is with the script but also in the casting of Joan Dixon, a limited actress, whose career mostly under the misguidance of Howard Hughes, lasted about a short eight years. She is unimpressive as a femme fatale, and will not make you forget Gloria Grahame, Ann Savage or other tough no-nonsense dames who have walked and lived on these dark city streets.

The film is directed by Harold Daniels whose career seemed to be split between acting and directing low budget works and later on television. Along with McGraw, the most enticing name associated with “Roadblock” is cinematographer Nicolas Muscuraca whose closing shot in the film lays all the blame on Diane for all that had transpired. After witnessing her husband shot to death, we watch her walk away, her back to the screen as the closing credits come on.