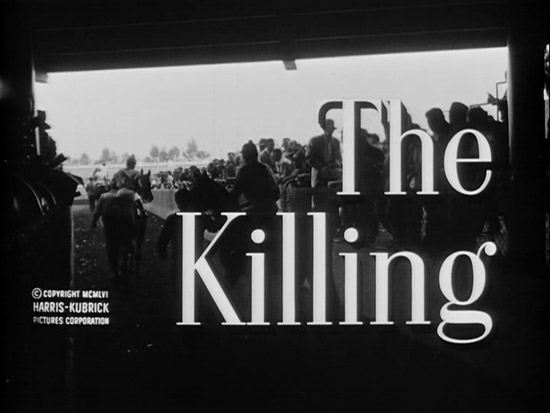 The plot of Stanley Kubrick’s third feature film, the 1956 heist thriller, “The Killing” seems old hat. A criminal just out of prison after serving five years wants to do one more job before settling down and marrying his girl (Colleen Gray). There have been some great heist films prior to this one. In 1950, “The Asphalt Jungle”, in 1955, Jules Dassin’s “Rififi” and Jean-Pierre Melville’s 1956 classic “Bob le flambeur.”  Among these films, made by experienced filmmakers, Kubrick’s third feature film stands tall, though at the time of its release, the film was not warmly received. The New York Times critic A.H .Weiler, was reserved in his response calling it “a fairly diverting melodrama.”

Since its release, “The Killing” has come to be recognized as one of the most influential crime films of all time. Quentin Tarantino admits the influence Kubrick’s film had on the filming of “Reservoir Dogs.”

For the first time Kubrick had professional financial backing for a project.  The budget was $320,000 dollars. Yes, still small but compared to the forty thousand he had to film “Killer’s Kiss”, this was astronomical. Additionally, for the first time Kubrick could afford to use experienced actors, including Sterling Hayden (The Asphalt Jungle , Johnny Guitar), Elisha Cook (The Maltese Falcon, Phantom Lady),  Marie Windsor (The Narrow Margin), Jay C. Flippen (The Live By Night)and Vince Edwards (Murder by Contract). 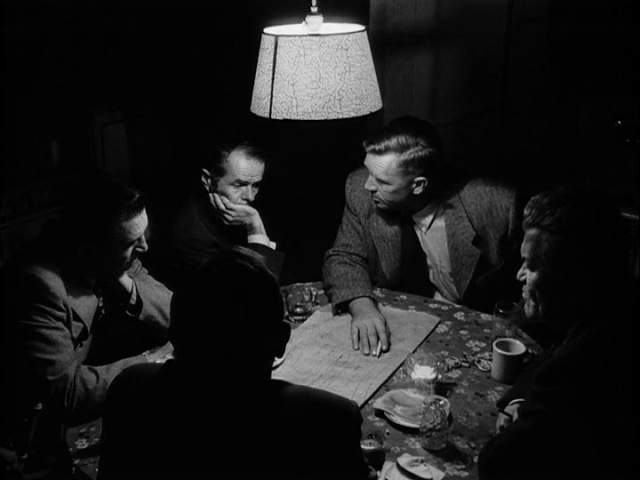 Kubrick engaged a professional co-writer, in this case Jim Thompson, whose hard-boiled novels were the basis for films like “The Grifters”, “The Getaway”, “The Killer Inside Me” and “After Dark, My Sweet.” Though Thompson wrote most of the screenplay, adapted from a novel called “Clean Break” by Lionel White, Kubrick took most of the credit with Thompson receiving only an additional dialogue credit. Unperturbed, or in need of the money, Thompson would continue to work with Kubrick on his next film, “Paths of Glory” and even on a third script that never was made.

Johnny Clay’s (Sterling Hayden) gang are not made up of your usual criminal types. Each man is in if for his own reasons. There is the meekish racetrack window teller George Peatty (Elisha Cook) who is desperate to win some respect from his trampy wife Sherry (Marie Winsor). Then there is Mike O’Reilly (Joe Sawyer), a bartender at the track,  who  needs the money to pay for the medical bills of his bed-ridden wife. A corrupt policeman, Randy Corsain (Ted DeCorsia) who is the getaway guy. Finally, there is Marvin Unger (Jay C. Flippen) an older man who is financing the upfront money.  If all goes well, the gang will get away with two million dollars.

Unfortunately, a good plan is only as good as its weakest link, and here the weak link is George Peatty.  George’s insecurity, and as we find out he has reason to be insecure about his wife, ignites the fuel that will blow the plan apart. George tells Sherry more than he should about the heist plans and Sherry shares it with her small-time hood boyfriend Val Cannon (Vince Edwards) who has ideas of his own.

The cinematography, credited to Lucien Ballard (The Wild Bunch, Will Penny) reflects the hand held style Kubrick favored many times during his extraordinary career. This is displayed during the blood bath toward the end of the film when George surveys the outcome of his violent massacre. Noirish high contrast lighting is also well used in various scenes where a single lamp sometimes is the only light source. 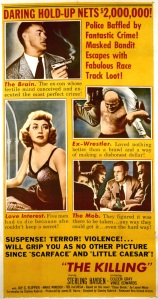 Kubrick’s most original element here is his use of a nonlinear timeline, jumping back and forth, as we watch each of the gang members’ movements before and leading up to the moment of the heist.  Kubrick was encouraged to abandon this structure during the editing of the film and go for a straighter direct storyline approach, however, after trying various other approaches he wisely decided to leave the film as it is. Finally, there is the ending with Johnny and Fay (Colleen Gray) trying to escape from the airport. There are two plainclothesmen coming toward him. Fay tells him to run and Johnny, looking tired and beat says, “What’s the use?”

Seemingly overshadowed by his later works, “The Killing” appears to be looked at as a minor work in the Kubrick filmography.  Certainly not as provoking or intellectually stimulating as his better-known films, “The Killing” remains a visual blueprint on how to make a great crime thriller, the nonlinear storyline, the pacing, and the characters.

Kubrick spends more time on character development here than he would in later works.  Johnny’s relationship with Unger (Jay C. Flippin), the scenes with the Russian, Maurice are all exceptional. The highlight though is loser George Peatty, who Kubrick films various times from behind bars (ticket window at the track and through the bars of a bed), and is locked up in a loveless marriage to his cheap sultry wife. They are a perfect mismatched married couple, the little emasculated  man with big dreams, and his money hungry two timing wife who is tired of waiting for those dreams to come true. After Kubrick saw Windsor in “The Narrow Margin”, he wanted her for the role. Marie Windsor is sensationally evil in her role.

Kubrick incorporates some interesting minor touches in the film that add color and depth to the characters. There is Johnny’s attempt to seduce Sherry, the unexpected explosion from Nickki (Timothy Carey), the shooter hired to assassinate the horse, Red Lightening, during the seventh race, who verbally attacks the black racetrack parking attendant with a racial slur.  Finally, the unexpected homosexual insinuation in Marvin Unger’ s suggestion that he and Johnny leave town together, so Johnny would avoid the trappings of marriage.

There are problems with the film, the use of voice-over, becomes annoying and unnecessary at times. The voice over seems to pander to the audience as if the assumption is we are not bright enough follow what is going on.  This may have been forced upon Kubrick by the studio that may have been nervous about the nonlinear storyline.  Kubrick did use a narrator in his previous film, “Killer’s Kiss” which I found less troublesome. Also, unconvincing the infamous cheap suitcase, Johnny uses and loses the money with. As precisely planned as the heist was you would think Johnny would have purchased a stronger and more secure suitcase.

Overall, “The Killing” is an excellent heist film with fine performances by Sterling Hayden, Marie Windsor and Elisha Cook. Personally, this is one of my favorite Kubrick films.