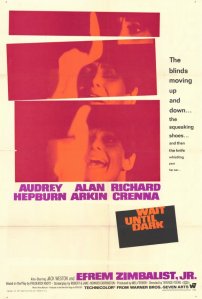 Warner Brothers purchased the film rights to “Wait Until Dark” early on with Jack Warner set to star Audrey Hepburn in the lead role of the blind heroine, Susy Hendrix.  Hepburn wanted Warner’s to announce as soon as possible that she would be starring.  She wanted to avoid accusations similar to what occurred when she took the role of Liza Doolittle in “My Fair Lady” and was accused of stealing the role from  Julie Andrews. In the play, film and stage actress Lee Remick was starring and was a big enough star to have headlined the film. What Audrey wanted known is that from the beginning Warner’s had no intention of having Lee star in the film version

The hit play opened in early February of 1966 at the Ethel Barrymore Theater with Remick and with Robert Duvall, as Harry Roat Jr. It was directed by Arthur Penn who would soon go on to film “Bonnie and Clyde. “Written by Frederick Knott whose first hit play was “Dial M For Murder”, “Wait Until Dark” was Knott’s successful return to Broadway, a woman in peril thriller in the  “Sorry, Wrong Number ” mode. 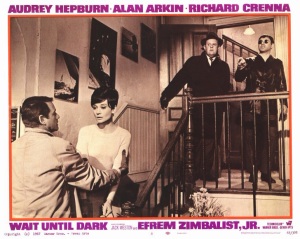 Produced by Mel  Ferrer, Hepburn’s husband, the film version opened up  on October 26th 1967 at Radio City Music Hall, just in time for Halloween. The film sets up Susy (Hepburn), a young  woman recently blinded in a car accident, against a team of three criminals led by a diabolical Harry Roat Jr. (Alan Arkin). The men are determined to get their hands on a heroin filled doll that has made its way to Susy’s apartment.

How the doll got to the Greenwich Village apartment Susy shares with her photographer husband Sam (Efrem Zimbalist Jr.) and its disappearance and reappearance takes time to explain as does the convoluted  deception by the criminals including  Roat Jr. dressing up disguised as other people in an attempt to get the doll back from the blind Susy.

The biggest question the film, and the play, leave your with is why did Roat Jr. have to wear disguises when his intended target is blind?  Despite this glitch in the plot and a slow build up, in the third act the film provides an intense finale that will still make viewers tense and jumpy.  I am not going to give anything away here so if you have not seen the film don’t worry. 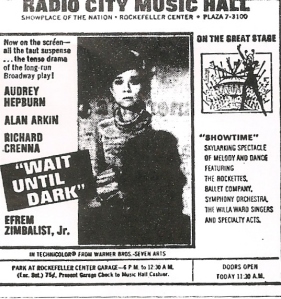 This was the first suspense thriller for Ms. Hepburn whose career was filled with gentler works like “Charade”, “The Nun’s Story”, “Sabrina” and “Roman Holiday.” She does well in this career change of pace and  received her fourth  Academy Award nomination for her efforts. Also, in the cast are Richard Crenna and Jack Weston as Roat Jr.’s  partners in the evil scheme. Directed by Terence Young, best known for directing the first two James bond films “Dr. No” and “From Russia With Love” and later on the fourth, “Thunder ball.”  Young was good friends with Hepburn and her husband Mel Ferrer and they fought for him to direct the film. Jack Warner was looking to get Carol Reed to direct. 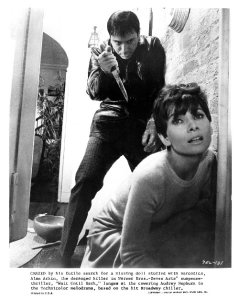 Like Lee Remick did for her stage performance, Hepburn  studied and did much research on the blind, first in Lausanne and then in New York at the Manhattan Lighthouse for the Blind. Alan Arkin got the role of the criminal Harry Roat Jr. after Warner’s was turned down by numerous stars  including George C. Scott. Arkin had just made a name for himself a year earlier in Norman Jewison’s  “The Russian Are Coming, The Russians Are Coming.”

Hepburn wanted to make the film in Europe where she felt comfortable, and while the film is set in New York most of the film involved interior shooting that could have been done anywhere. A few exterior shots of Greenwich Village could have been made in New York and the rest of the film completed anywhere. Jack Warner refused insisting that the interiors be filmed in California. While Warner won that battle he lost the tea at four war. Audrey insisted on a stipulation that they break for tea every day in the afternoon, a British tradition, and was backed up by the Brit director Mr. Young. Jack Warner steamed but the crew had their daily break tea.

Warner Brothers studio used a little bit of Alfred Hitchcock and William Castle ballyhoo when they announced in the coming attractions for the movie that during the final eight minutes of the film the theater lights will be darkened to the legal limits to intensify the action on screen.

In 1998, the play was revived on Broadway with Marisa Tomei and Quentin Tarantino in the roles of Susy and Harry Roat Jr. Changes made to the original play and movie, like the apartment was now on the Lower East Side instead of Greenwich Village, apparently did not add any gloss to the play. It closed after 97 performances.