The film opens with the camera panning left to right across the skyline and rooftops of New York City settling down on a street in a lower class ethnic neighborhood of Manhattan, and one tenement building in particular. It is summer and it is excruciatingly hot, neighbors are sitting on the stoop of the building, kids are playing, cooling off with the help of a hose attached to an open fire hydrant. The adults all complaining about the unbearable heat, gossiping, arguing politics, tugging at the sweat soaked clothing clinging to their bodies.  The neighbors are a melting pot of accents, an American mosaic of Italians, Jews, Swedes and other nationalities all living in close quarters. They’re friendly, yet at times cautious toward each other forced by the circumstance, of looking for a better life in America, to live together.

Anna Maurrent (Estelle Taylor) is one of these people, a bored housewife married to Frank (David Landau) an alcoholic man, stern, seemingly beaten down by life. In a search for some excitement from her dreary existance, she is carrying on an affair with Steve (Russell Hopken), a bill collector and a married man. The neighbors all are aware of Anna’s indiscretion including noisy gossipy neighbor Emma Jones (Beulah Bondi).

Anna and Frank have a grown daughter Rose, (Sylvia Sydney) who works at a Real Estate office. She is pursued by her boss who flatters her that she should pursue a stage career. He encourages her to move out of the neighborhood, telling her he is willing to set her up in a nice apartment. Of course, his motives are less than pure. He, like her mother’s lover, is also married. Rose resists his advances but does go out to dinner with him. Then there is Sam Kaplan, a young Jewish law student who lives in the building and has crush on the young Rose. Sam also happens to be a coward and is continually bullied by Vincent, Emma Jones son who spits out ethnic slurs and is always coming on to Rose. Sam, however is so in love with Rose that he is willing to give up his law studies and run away with Rose toward a better life.

One afternoon Frank unexpectedly comes home early and notices the window shade is drawn in his apartment. Running upstairs, he finds Anna and her lover in the apartment and he shoots them dead.  The police soon capture Frank in a basement down the block. He apologizes to his daughter for the mess he has created as the police take him away. Tragedy has changed Rose’s life forever, for her, her young brother and everyone on the block.

Director King Vidor has subtly opened up the stage bound play by using a variety of camera angles making you forget the entire story takes place outside the building. Vidor already known for such classics “The Crowd” and “The Big Parade” delivers a film that retains its social impact still after all these years. The only scene I found dated was Frank’s escape, right after the shooting. It is awkwardly structured and  poorly directed.

The characters are colorful and human. A wonderful scene involves an Italian man and a Swede, the janitor of the building, as they argue about who really discovered America, Columbus or Leif Erickson. The script is also filled with pre-code touches, illicit affairs, ethnic slurs, and sexual innuendo.

New Yorkers will be nostalgically reminded of a life now long gone. One scene that rang a bell for me was when Rose’s kid brother yells up to his mother to throw a dime out the window for some ice cream. Anna who is two stories up wraps the dime in a napkin and tosses it out the window to the kid (many times my Mom and I enacted this scene in my own childhood). Tenants sitting outside on the stoop, on the hot summer days was also a common sight. 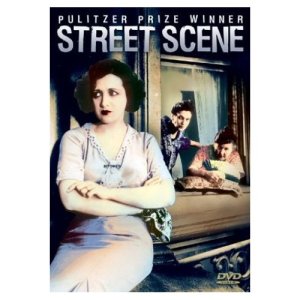 Vidor ends the film with a reverse pan of his opening shot, the camera moving right to left from the streets of Manhattan up to the rooftops and across the New York skyline.  This opening and closing was a typical technique used by D.W. Griffith in some of his shorts (The Country Doctor). However, you can read more into this than Vidor emulating Griffith, I interpreted it to mean that the story is just one of  many in one neighborhood of many. It happened here but could happen anywhere.

The film is based on playwright Elmer Rice’s Pulitzer Prize winning play, which ran for more than 600 performances on Broadway. Beulah Bondi made her screen debut recreating her stage role in the film. Several other actors from the play also appear in the film. Rice was a prolific author, stage director and producer. Other works include “The Adding Machine” and “Counsellor-at-Law.”  Rice’s career extended close to 40 years as a playwright with more than 50 plays to his credit.