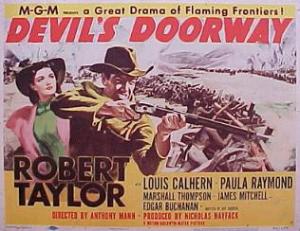 This article may contain Spoilers

From his very first western Anthony Mann gave us complex adult narratives. Mann’s characters are too complicated to be just good or bad, like real people there are all shades of gray in between.  Released the same year as Delmar Daves “Broken Arrow”, “Devil’s Doorway” tells us a story or proud people who through laws, white man’s laws lose their land, their dignity and ultimately their lives.

Lance Poole (Robert Taylor), a Shoshone Indian returns home from serving in the Union Army during the Civil War where he rose to the rank of  a Sergeant Major and more importantly, a Congressional Medal of Honor recipient. He comes home believing the world has changed and that and he and his fellow Indians will be treated fairly no longer subject to prejudice. Five years later Lance has built a big cattle ranch in a water abundant area and has become a rich man which we soon find out some local white folks resent.  With the new Homestead Act coming into force, under the law an Indian is not considered an American citizen but rather a ward of the federal government, subsequently as a non-citizen Lance is not entitled to file a claim on the land that is his own. He will lose everything. Lance seeks the help of a female lawyer (Paula Raymond) but each of their attempts to secure his land or keep the peace between incoming sheepherders and the Indians is instigated by Verne Coolan (Louis Calhern), a shyster lawyer with big aspirations in his head and racism in his heart. It all leads to a climactic battle where there are no winners.

Along with “Broken Arrow”, “Devil’s Doorway” was a major change in how Native-Americans were portrayed on the screen. Instead of the stereotypical savage whooping it up, Mann and his screenwriters, portray  Lance Poole as a three dimensional character with dignity and pride. As with most of Mann’s characters Lance is a complicated individual, a good man who wants justice but can be unjust at the same time, for example when he is not willing to share the land with the sheepherders becoming almost as responsible as the others for the forthcoming  violence.

Like most of Mann’s westerns this is a dark film, one in particular that retains the  film noir characteristics of his earlier works. The DP was John Alton who worked with Mann on many of his earlier atmospheric film noirs in the 1940’s (Border Incident, Raw Deal, T-Men). Alton’s camera and lighting are evident in many scenes including a harshly lit barroom brawl between Lance and one of lawyer Verne Coolan’s thugs.  This scene is filled with tight close-ups, dramatically effective lighting, including lightning and thunder, all contributing to the noirish quality. Also note the exquisite black and white landscape photography shot on location in Colorado. This is one of the most beautifully photographed westerns made, visually stunning reminding me of Ansel Adams photographs. Sadly, this would be the last collaboration between these two men.

One of the stumbling blocks in the film is the need to get over Robert Taylor portraying an Indian. His facial structure just looks different from the other Indian characters in the film (some actors were actually Native-Americans) whereas Taylor just seems to have an overly sunburned face. That said, he handles the role admirably for an actor I have always considered limited in his abilities. 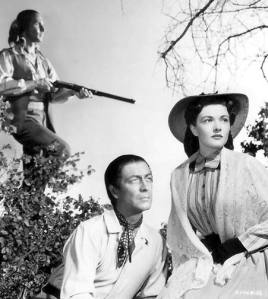 Like the female lawyer who attempts to help Lance keep his land, both are outsiders, he an Indian and she a female in a man’s profession out west trying to hide her identity by hanging a sign that reads A. Masters. Lance exposes his own prejudice when he first enters her office and realizes she is a woman. He practically runs out, then suddenly stops and returns, a telling moment. Masters on the other hand is concerned on how handling an Indian’s case will affect her already shaky standing in the community. They slowly come to “trust” each other. When she helps fill out the form so Lance can file a claim she discovers he fought in three major battles during the war and received the Congressional Medal of Honor. Little do both realize at the time his biggest battle was still to come.

Mann is also more daring in attempting to reflect a sexual attraction between the two outsiders. When Lance wants to know how much she really trusts and likes him, he puts his arms around her and pulls her close daring her to kiss him. The desire is there but she holds back from going “all the way.” The sexual frustration is evident on her face.  After the final battle is lost, a badly wounded Lance surrenders to the soldiers, he gives up wearing his Army uniform with the Medal of Honor on his chest. He receives a salute from the Captain. He salutes back and falls forward dead. 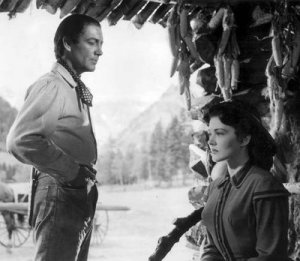 Though the treatment of Native-American’s was dealt with more respect in “Broken Arrow” than earlier films it remained a traditional western and became a major hit. The James Stewart character is himself attracted to the Indian Squaw (played by Debra Paget) this certainly would reflect a more acceptable romance for the masses than a white woman’s attraction to a male Indian as portrayed in Mann’s more risky film. “Devil’s Doorway” was released later in the year, a less traditional film it died a quick box office death.