“Dial M for Murder” was a successful play in both London and on Broadway (where it ran for 552 performances). Written by English playwright Frederick Knott (Write Me a Murder, Wait Until Dark), the hit play originally was turned down for production by London theater managers claiming there would be little interest in this sort of play. Eventually, the BBC showed interest and the play premiered on the British TV station in early 1952. The play made its West End debut when a businessman who owned a lease on the Westminster theater, and with no play ready to put into production, decided to take a chance and put on the low cost thriller with some of the same cast members from the television version. The show was a critical and commercial success.  In October 1952, the play opened in New York with Maurice Evans as Tony Wendice, (Ray Milland in the film). Evans had shrewdly acquired the North American rights to the play. Also in the Broadway cast were Anthony Dawson and John Williams, both who would recreate their roles later on screen. Williams won a Tony Award for his role as the Police Inspector.

Enter Alfred Hitchcock who loves a well plotted mystery.  Hitch was at the end of his Warner Brothers contract and needed a film to complete his obligations.  Women in peril has always been a favorite subject for writers ) and film directors, so the blending of these two talents was a natural fit. Knott wrote the screenplay which remained faithful to the play. Unlike most filmmakers, when they film a play, Hitchcock did not “open up” the story. He kept it confined to the apartment, where the entire play takes place, except for a couple of short scenes outside the apartment and one scene at a men’s club.

The plot is a meticulously constructed story of a man who plans to have his adulterous wife murdered, and the “gentlemanly” cat and mouse game that ensues between the investigating police inspector and the husband after the plan goes awry. The film has a history of being considered second class Hitchcock, yet a closer look reveals this not to be so. The main reason for the second class status has stuck is the criticism the film is too stage bound, Hitchcock did not open it up. However, the director has worked in confined quarters before, for example in Lifeboat and once again in Rope. Hitchcock overcomes the stage bound, talky limitations of the play through exquisite camera movement, mood and a continually growing tension.  Making a claustrophobic play cinematic is actually the kind of creative challenge Hitchcock thrived on for years. 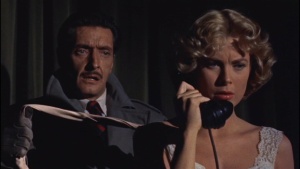 Filming in color was still fairly new to Hitchcock (this was his third color film after “Rope” and “Under Capricorn.”) yet he uses it superbly. In an early scene, we see Tony Wendice (Ray Milland) and his wife Margot (Grace Kelly) having breakfast. Kelly, dressed lovely in white, is reading the newspaper. She reads that mystery author Mark Halliday (Bob Cummings) will be arriving on the Queen Mary. Hitchcock then quickly cuts to a close up of Kelly, now dressed in red, kissing her lover Halliday. In this quick sequence we see Kelly, the epitome of the cool icy Hitchcock blonde go from a sweet virginal looking housewife into the arms of her adulterous lover. Also note that Kelly’s wardrobe in the film goes from light virginal colors that turn grayish and finally to black as she goes from the victim of a crime, to being accused of murder. 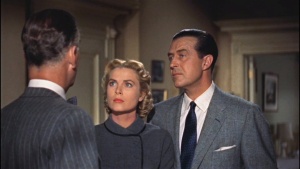 The irony of the two men in Margot’s life is that Milland’s character is arguably, the nicer of the two. Ray Milland is a suave, if less charismatic, Cary Grant gone bad. He is debonair, sophisticated, used to the better things in life. His Tony Wendice is a former professional tennis player who blackmails a stranger into attempting to murder his philandering wife (one should consider the similarities here with “Strangers on a Train”). Still, compared to whinny Bob Cummings’ writer, Mark Halliday, one wonders what possesses Kelly’s Margot to cheat on the debonair Milland.  This was Grace Kelly’s first film with Hitchcock. He had seen a screen test she did some time earlier and also watched her most recent screen appearance in John Ford’s “Magambo,” quickly realizing she personified the cold as ice untouchable blonde who underneath the surface seethed with the hidden fire and sensuality that he always envisioned. Still not a major star, Kelly could be gotten cheap on loan from MGM, which fit into Warner’s allotted budget. From here Kelly would quickly move into the pantheon of Hitchcock blondes as he would use her in his next two films (“Rear Window and “To Catch a Thief”). They would also become good personal friends.

Hitchcock actually wanted Cary Grant for the role but Warner Brothers was not willing to shell out the money Grant was demanding. Warners was more interested in the film being shot in the 3-D process which the studio had a huge success with the recently released “House of Wax.” The director was not keen on the new process but decided to use it as tool in his arsenal, not going for the cheap gimmickry shock effects that most filmmakers were doing.  The only obvious use of the 3-D process was during the attack on Margot by the intruder when she stretches her hand out toward the audience with a pair of scissors in hand just before plunging it into the intruders back. Instead, Hitchcock used a lot of high and low angle shots combined with graceful camera movement to keep the mainly one set film from seeming static. The 3-D fad was just that and by the time of the film’s release the public had a huge headache due to the annoying cardboard glasses that had to be worn. The 3-D version of “Dial M for Murder” was barely released with most theatergoers seeing the film in the regular flat screen release.