Five classic films (The Godfather, The Godfather 2, The Conversation, Dog Day Afternoon and The Deer Hunter), five memorable performances, John Cazale died at the still young age of 42 leaving a small but everlasting legacy of work that has more than stood the test of time. More amazing, is considering his performances he never received an Oscar nomination. Casual filmgoers remember him only as Fredo, the middle brother with the permanently hurt puppy dog look on his face in The Godfather 1 and 2.

Richard Shepard’s insightful documentary, “I Knew it Was You: Rediscovering John Cazale” is a warm tribute to an actor, respected and treasured by his peers. The film traces his life growing up in Massachusetts, moving to New York to pursue a career in theater and film. The film includes many interviews including playwright Israel Horovitz (Cazale was in ten of his plays, including the Off-Broadway,”The Indian Wants the Bronx” with Al Pacino for which they both won Obie’s). Many of his co-stars including Pacino, Gene Hackman, Robert DeNiro and Meryl Streep, who became the love of his life, talk about working with Cazale, his talent and friendship. Directors Francis Ford Coppola and Sidney Lumet discuss his special qualities and the unexpected nuances he would bring to a role adding an unexpected depth to his characters which stretched the film’s effectiveness beyond what they imagined.   Coppola was so taken with Cazale in “The Godfather,” he expanded his role in the second film. 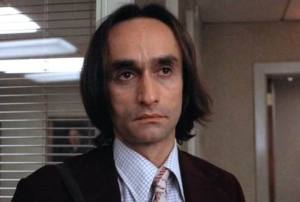 By the time Cazale made his last film, “The Deer Hunter,” he had already been diagnosed with lung cancer and considered uninsurable. In order for him to get the role of Stan, Robert DeNiro put up his own money as insurance that Cazale would be able to finish the film. Cazale completed his role though he died before the film was released.

John Cazale was an extraordinary actor who through his work earned the trust and respect of his fellow actors and filmmakers. Al Pacino states he learned more about acting from working with John Cazale than any other actor.  The film is a short intriguing 40 minutes long, directed by Richard Shepard (Matador, The Hunting Party).   It premiered at the Sundance Film Festival in 2009, made its New York Premiere at BAM before making its way to HBO in 2010. Now available on DVD. It includes two shorts, one in which Cazale acts and is the cinematographer in the second.

18 comments on “I Knew It Was You: Rediscovering John Cazale (2009) Richard Shepard”