I have reposted this review of Kurosawa’s HIGH AND LOW in conjunction with the Japanese Film Blogathon fundraiser hosted by Cinema Fanatic and Japan Cinema to aid the people of Japan during this horrific tragedy. The images of homes being washed away like paper cups are devastating and painfully beyond imagination. Please give what you can, no amount is too small. Just click on the image on the sidebar.

Over the years I have read many books written by Ed McBain. His 87th Prescient series, generally considered the originator of the gritty police procedural, began in 1956 with “Cop-Hater”, his first novel in the long running series.  His last, “Fiddlers” was the 55th in the series.  McBain was also well known as Evan Hunter (his legal name, though his was born Salvatore Lombino), author of among other novels, “The Blackboard Jungle”, “Strangers When We Meet” and “Buddwing” all made into movies. As Evan Hunter, he also worked as a screenwriter most notably with Alfred Hitchcock on  “The Birds.” 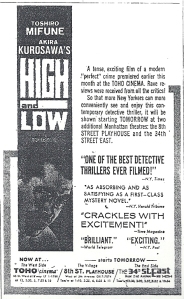 Akira Kurosawa’s 1963 film, “High and Low” is based on McBain’s 1959 87th Prescient novel, “King’s Ransom” and like the film it revolves around a child kidnapping, ransom and murder. For the most part Kurosawa has remained faithful to the novel though the main character Kingo Gondo (Toshiro Mifune) is certainly a more sympathetic and three dimensional figure than the novel’s Douglas King.

Gondo is a top executive at  a shoe company where he is involved in a power struggle with other executives who want to reduce the quality of the shoes they produce in order to increase profits. Secretively, Gondo is in the process of buying up enough stock in the company to avoid the other executives’ takeover, instead he is attempting to take over the company himself. However to raise the money he has had to leverage everything he has including mortgaging his house, and putting his career on the line. Just as he is about to close the deal his son is kidnapped and much of the money he would use to buyout the company he is now prepared to use to save his son. He then finds out the kidnapper’s took the wrong kid. Instead of his son, they kidnapped his chauffeur’s young boy, and his son’s playmate. Gondo is now faced with a moral dilemma. Does he still pay off the kidnapper’s, saving the life of young boy, his chauffeur’s son, or use the money to close his big deal saving himself and family from financial ruin. 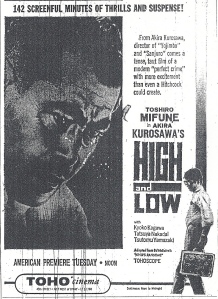 Kurosawa has taken a well written though typical police procedural and turned it into a complex moral quandary. When he believed the kidnapped boy was his, he was willing to sacrifice his career and financial wealth to save his child, but once it is discovered the wrong boy was taken, he backs off on paying the kidnapper’s. The risk, he says, is too high. If he pays it will mean financial ruin losing not just the opportunity to take over the company but personal financial ruin. They will be broke, a situation his wife, who comes from a upper class background, never knew. Still for her, the child’s safety comes first. She doesn’t understand how Gondo, a loving father, can be so callous toward another’s child.

The film can be split into two acts, the first is a one set claustrophobic piece set in Gondo’s expensive home that is set up upon a hill overlooking the rest of the city. This entire first act focuses on the corporate wargames (Kurosawa arranges the actors like pieces on a chessboard), and the kidnapping. The second half of the film moves outside on to the gritty streets of Yokohama with twist and turns, a police procedural tossed inside out as the law begins to search for clues on how to catch the kidnappers and get Gondo’s ransom money, that  he finally agreed to pay, back in time for him to close his deal. Kurosawa gives us a step by step narrative of the police investigation, how they build up enough detailed information finally identifying the kidnaper and then setting a trap.

What may sound like an episode of “Law and Order,” Kurosawa turned into a study on moral values, good and evil.  It is brilliantly presented with some scenes containing a film nourish bent (the Drug Alley scenes), while  others are  evocative of Hitchcock (the excellent bullet train sequence). Kurosawa’s camera placement is also that of a master. There is a memorable scene when Gondo throws his former right hand man out of his house after realizing he sold out to his business enemies. Kurosawa has Gondo camera right and up front, looming large, in this scene. Placed in the foreground throughout all this is Gondo’s chauffeur, the father of the kidnapped boy, with his head down, meek looking. This shot tells you all need to know about where the power lies, Gondo the big powerful corporate executive discussing paying the ransom or saving his business while their stands his servant/chauffeur, helpless, small, defeated father at the mercy of the strong, rich and powerful. Pitifully, at one point, the chauffeur even apologizes to Gondo for asking him to pay the ransom to save his son’s life.

Kurosawa has taken the basics of a standard police procedural and turned it into a vision of class distinction and resentment; rich versus poor, good versus evil, and the fact that nothing is simply black or white. As Gando, Toshiro Mifune reflects a character who is strong, powerful, loving, ruthless and helpless , a rollercoaster ride of emotions. Other fine performances include Tatsuya Nakadai as police detective Tokura and Takkashi Shimura, a Kurosawa regular.