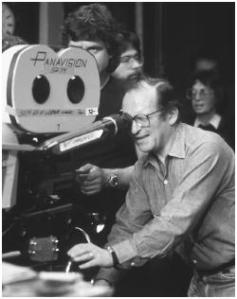 Like his New York cohorts, Martin Scorsese, Spike Lee and Woody Allen, Sidney Lumet never quite fit in with Hollywood and remained outside the system for his entire career. A career that spanned well over forty-five years going back to the days of live television dramas when he and fellow directors like John Frankenheimer and Arthur Penn, among others were creating their own version of a new wave.

Actually, Lumet’s career goes back to his childhood in the Yiddish theater district along 2nd Avenue in lower Manhattan. His made his Broadway debut, as a child actor, in the original production of Sidney Kingley’s “Dead End.” He appeared in at least ten other Broadway productions including the 1946 production of “A Flag is Born” where he was a replacement for Marlon Brando.  Lumet made one appearance in a film as an actor in “One Third of a Nation” (he also had a cameo appearance in Jonathan Demme’s remake of “The Manchurian Candidate”), a film most noted for being the last to be shot at the old Astoria Film Studio in Queens that is until Lumet inaugurated the refurbished studio in 1978 with the making of his failed musical, “The Wiz.”

After World War II, Lumet made his theatrical directing debut Off-Broadway and eventually on Broadway in the productions like, “Speeds in the Wind and “Nowhere to Go But Up.” With the advice of his friend, actor/director Yul Brynner, Lumet made the transition to live TV on such shows as “The U.S. Steel Hour,” “The Alcoa Hour” and “Studio One in Hollywood,” among others. Lumet made his feature film debut as a director in 1957 with the courtroom classic, “12 Angry Men.” Lumet said it took him about seven films to adjust to the spacial difference between the small TV screen and the much larger movie screen.  In “12 Angry Men” Lumet used 387 different setups, shot in just 19 days. 200 of those setups were in the last half hour of the film in order to speed up the tempo.

As a director, Lumet was a supreme craftsman and artist. He knew his camera lens and angles, he was knowledgeable with sound. On the set, he always stayed close to the camera and nearly always brought his films in under budget. While directors like William Wyler and George Stevens shot a million feet of negative film for each movie, Lumet shot much less, for example, making “Serpico,” he shot only 72,000 feet. He credits this to his knowledge of knowing what the camera is seeing so there is no need to shoot additional footage to cover himself.

From his very first film (12 Angry Men) to his last (Before the Devil Knows Your Dead), Lumet never lost his vision as a filmmaker of social issues. In films like “Serpico,” “Network,” “The Pawnbroker,” “12 Angry Men” and “Prince of the City,” he exposed corruption, bigotry, and courage in the face of adversity.

While many of Lumet’s films focused on New York, his vision extended beyond the five boroughs in works like “Fail-Safe” (Cold War), “Murder on the Orient Express” (Agatha Christie), “The Deadly Affair” (International intrigue) and “The Hill” (World War II). Many of Lumet’s films were based on theatrical plays from classic’s like Tennessee Williams  “The Fugitive Kind,” O’Neill’s “Long Night’s Journey into the Night,” Chekov’s “The Seagull” to more modern works like “Child’s Play,” “Equus,” “Deathtrap” and the most unlikely work in his filmography, “The Wiz,” a critical and audience failure.  But New York was his favorite subject, his heart and soul. It was so ingrained in his work; the city was a character with emotions reflecting the mood and style of each film. Like his fellow New York filmmakers he was also ignored when it came to receiving the treasured Oscar, only to be given a reluctant pat on the back honorary Oscar in 2005.

Police corruption, ethics were recurring themes in Lumet’s work. In “Serpico,” based on the bestselling book by Peter Maas that told the story of David Durk and Frank Serpico who exposed multiple examples of police corruption within the New York City police department, Lumet’s film, from a screenplay by Waldo Scott and Norman Wexler, focused its attention on Frank Serpico, portrayed by Al Pacino. The film was daring for its time and a critical and popular success.  “Prince and the City”, “Q&A” and “Night Falls on Manhattan” all followed the same themes. The courthouse was another favorite theme for Lumet, most prominently displayed in “12 Angry Men”, “The Verdict,” “Night Falls on Manhattan” and in “Find Me Guilty,” a much underrated film.

Late in his career Lumet would return to TV where he started with the excellent police drama, “100 Centre Street,” the title referring to the location of the Criminal Court building in Manhattan, and a HBO movie, “Strip Search.”

Actors loved working with Lumet. He brought out the best in them, just think about the amazing performances he got out of such actors like Al Pacino, Rod Steiger, Paul Newman, Charlotte Rumpling, Faye Dunaway, and Peter Finch to name just a few. Many received Oscar nominations and even the award itself. His films received well over fifty nominations.

What is most amazing about Lumet’s career is that he managed to continue working on his own terms until his death. Few directors can find a job at the age of 83 never mind make a film as good as “Before the Devil Knows Your Dead.”

TCM will conduct a four film tribute plus a Private Screenings Interview on April 21st starting at 8PM.