Only Warner Brothers, who ripped the stories from the day’s headlines, would have the guts to have put out a gutsy uncompromising perceptive film like “Black Legion.”  Released in 1937, the film traces the story of Frank Taylor (Humphrey Bogart), a machinist who gets passed over for a promotion in favor for a more qualified “foreigner,” Polish-American co-worker, Joe Dombrowski (Henry Brandon).  Frank, prior to being passed over, was a swell guy, a good family man, liked by everyone at work for his eagerness to do a good job. That all changes after the studious Dombrowski is anointed with the Supervisor position Frank thought he had in the bag. After all, he had many years of service and he was a real American.

Director Archie Mayo paints a brutally ugly picture of bigotry, cowardice and senseless brutality hiding behind a mob mentality of flag waving patriotism. The film’s screenplay, written by Abem Finkel and William Wister Haines, was based on a story by Robert Lord, who wrote a fictionalized version of the secret society known as the Black Legion, a group based in the nation’s heartland who modeled themselves on the Klu Klux Klan. Like the fictional organization in the film, the real Black Legion had a common purpose, keeping America pure for “real” Americans.  During their reign there were daily news reports of kidnappings, floggings, hangings, and were responsible for at least two murders, including the death of Workers Progress Administration organizer, Charles Poole. The Black Legion swore to fight against the Catholic Church, Judaism, Communism, “and all the ism’s our forefathers came to this country to avoid.” That is except for racism which they embraced.

Bogart’s Frank Taylor is ripe for the organizations’ pickings. A fellow co-worker, Cliff Moore (Joe Sawyer) eggs Frank on about losing out ‘his’ promotion to a foreigner, telling Frank how he belongs to an organization that would fight for guys like them. Frank’s bitterness grows, his work suffers and soon he is being initiated into the secret society’s inner circle surrounded by other men from the community in hooded uniforms swearing allegiance under the pains of death.

With Frank now part of the group, the Black Legion go on a rampage, first setting fire to the Dombroski farm, dragging Joe and his father out of the house and forcing them to get out of town by riding the rails. Irishman Mike Grogan (Clifford Soubier) is taken from his home in the middle of the night and whipped to near death. Finally, Ed Jackson (Dick Foran), Frank’s close friend, co-worker, and fiancé to Betty Grogan (Ann Sheridan), who threatened to go to the police is taken from his home and out into the woods to be flogged. When he attempts to break loose from the gang, there’s a shout to stop him. Frank, with gun in hand, shoots Ed dead. The rest of the Legion members quickly run off except for Frank who remains motionless and alone. He pulls his hood off and falls to his knees in front of his dead friend, at first anguished, then in panic he begin to crawl away, finally running off in fear.

Frank’s descent from the nice wholesome family man, to a hate mongering, alcoholic who turns against everyone in his life is one man’s personal journey into hell, even losing his wife (Erin O’Brien-Moore) and young kid (Dickie Jones). Bogart in his first leading role, and what he hoped would be his breakout role, smoothly transitions from a good guy to demonic hate monger.

Other chilling scenes that run through the film include Frank’s initiation ritual into the group where his swears to an oath of obedience under the pains of an avenging God and an unmerciful devil. Additionally, there is a scene in Frank’s home where he is listening to a racist radio talk show host rant about pushy foreigners stealing our jobs and how we must protect our home and land. “America for Americans” the talk show host squawks. When his young son asks him why they can’t listen to the radio series “Flash Tyler”, Frank jumps on the kid telling him to, “Listen to this guy! He’s talkin’ sense!”

For Bogart, he hoped this film was his chance to break into the big time. Even after his breakout performance in “The Petrified Forest,” he remained in the second tier of the Warner Brothers stable behind Cagney, O’Brien and Robinson, still portraying mostly cheap one dimensional hoods with names like “Turkey,” “Red” or “Bugs.” But while the film made a profit and critics praised the film for its boldness (The New York Times said, “the unforgettable, the horrible thing about Black Legion, is…it did happen here”), and for Bogart’s performance, (The New York Morning Telegraph called his work “powerful…establishes Humphrey Bogart as a star”), it was not the big hit and audience pleaser needed to propel Bogie into the top ranks of Warner’s stars. 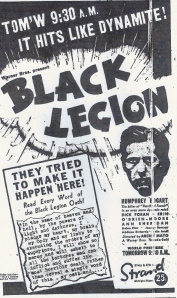 Today with all the political rhetoric and illegal alien issues that are constantly in the headlines one has to wonder have we come very far? There is still too much talk of “real” Americans and “love it or leave it” and not enough about the true meaning of America as the judge states at the end of the film. The speech he gives is a bit preachy but he does hit at the heart of the issue, what America stands for or at least, what it idealistically should be.