Don Siegel released two films in 1968, films bookending the changes that were happening in Hollywood, the first film representing the ending of one era and the second beginning of another. Both films are police dramas based in New York City and both films involved law officers who are troublesome renegades to their superiors. They also have some similar casting with actors, Susan Clark and Don Stroud, in both films, yet in “Madigan” starring Richard Widmark and Henry Fonda, we are saying goodbye to Hollywood’s old guard, while with “Coogan’s Bluff” we are welcoming the future in the cool, silent gaze of Clint Eastwood. Director Don Siegel himself was kind of turning a corner in his own career going from a “B” film director to the “A” list along with what would turn out to be the start of a fruitful and professional relationship with Eastwood.

Siegel teamed up for the first time with Eastwood who just completed his first starring role in an American film, “Hang em’ High” and was now looking to move on to his next project, “Coogan’s Bluff,” based on a screenplay by Henry Miller, Dean Riesner and Howard Rodman. The film is a fish out of water story, a culture clash of East meets West, city slickers meet small town country boy. Call it what you will but when the boy is Clint Eastwood the shit is going to fly. 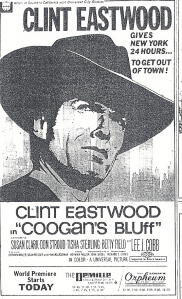 Walt Coogan can be viewed as an early version of “Dirty Harry” Callahan, the type of law officer who does not stand much on rules or laws, unless they are his rules and his laws. Coogan’s mode of operation is that of a wild west sheriff, the kind of guy Texan Rick Perry has wet dreams about; only as Coogan constantly reminds everyone in New York, who call him Tex, he is from Arizona. We first meet Deputy Sheriff Coogan in the Arizona desert chasing after a Navajo man wanted for killing a woman. “Just his wife,” Coogan says later to his married lover (Melodie Johnson), whose place he stops by for a little afternoon delight after capturing his prisoner but before delivering him to the jailhouse. This remark is just one of a series of chauvinistic remarks made throughout the film.  Before Coogan and his lover finish their romantic interlude, the sheriff shows up. Fed up with Coogan’s independence and rebellion he assigns him to the job of heading to New York City to extradite a prisoner named James Ringerman (Don Stroud) back to Arizona.

In New York, Coogan’s is in culture shock, and so is New York when the two sides meet. His contact in Manhattan is Lt. McElroy, (Lee J, Cobb), a crusty, overtaxed man who hasn’t got the time or the patients to deal with this “cowboy.” Coogan arrives at the 23rd police precinct ready to take his prisoner, a wacked out small time hood, back to Arizona the same day only to be informed by McElroy that Ringerman is in a hospital coming down from a bad acid trip and cannot be moved until the doctors clear him, and then there are New York State laws and procedures to be followed before he can be handed over. McElroy recommends Coogan find himself a hotel room, spend a few days enjoying the city and it attractions.

Coogan, ever his own man and never one for letting laws or procedures get in the way, bluffs some hospital staff attendants and gets Ringerman released into his custody only to lose him on the outside when one of Ringerman’s buddies (David Doyle), tipped off by Ringerman’s drugged out girlfriend Linny Raven (Tisa Sterling), beats the crap out of our concrete cowboy. More determined than ever, Coogan sets out on a path of destruction to find Ringerman leaving behind a series bruised men and women (emotionally and physically), until he gets his man only to have McElroy tell him he still has to follow the New York State rules and procedures before Ringerman can be taken back. Bruised, injured but not beaten, Coogan this time agrees to wait.

This was the first teaming of director Don Siegel and Clint Eastwood who would go on together over the next few years to form a professional and personal relationship ingraining Eastwood’s persona deep into our celluloid consciousness.  Shot mostly in New York, the film, like Siegel’s previous film, “Madigan” captures the city during the turmoil of the Vietnam War. New York looks dirty and dangerous both in characters and locations. McElroy is a tough cop but seems to be losing the battle against a city filled with crime and local lunatics, and now a cowboy sheriff. Like the Vietnam War, McElroy and New York are stuck in a quagmire of rules and regulations which only Coogan is willing to break on through. 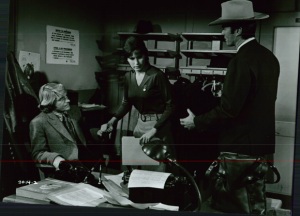 Eastwood’s cool, silent, squinty eyed anti-hero, demeanor is already established in this early role. Patrick McGilligan in his Eastwood biography, “Clint: The Life and Legend,” states that “Eastwood was very clear in story conferences about being ‘sick of Hopalong Cassidy heroes and all that malarkey.’  He wanted to come off as a ‘heroic bastard,’ in the words of “Coogan’s Bluff” co-writer, Dean Riesner.  This the writers and Eastwood accomplish without a doubt. Coogan continually takes the law into his own hands going after his target and his low life friends as well as the women he comes across.  Susan Clark is Julie, a probation officer who Coogan almost seduces only instead steals some information from her files on Linny Raven, a patient of Julie’s, and Ringerman’s druggy girlfriend. When Coogan finds Linny, he first seduces her in hopes of her giving up the hideout location of her boyfriend. When that doesn’t work he then threatens her with violence to make her give up Ringerman’s hiding place. Coogan basically leaves a bloody path of bruised and battered bodies across the city.

One of the joys of this film is the location filming in New York City. The old 23rd Police Precinct provides a nice atmospheric jolt to the daily lives and activities inside a police station in 1968. Other locations include the Pan Am Building, now the MetLife Building, The Cloisters, and Fort Tryon Park.

The script was originally written as a potential TV show and eventually the idea reverted back when the original screenwriter and creator, Herman Miller, turned it into the hit series, “McCloud” with Dennis Weaver. “Coogan’s Bluff” is not generally considered top notch Eastwood but it served at the time as a nice transition piece for Eastwood smoothly moving him from his western cowboy persona to the more modern day characters he would begin to portray.