Many true heart Elvis fans consider “Jailhouse Rock” one of his best films. As a movie, I much prefer “King Creole” with its better cast, script, director and overall a better musical score. However, Elvis never looked as good as he did in “Jailhouse Rock,” young, sensuously dangerous, and still wildly untamed from what would soon become the chain around his neck, his manager Colonel Tom Parker.  It was only Elvis’ third film, first came “Love Me Tender,” a film already in the works at 20th Century Fox before Elvis came on board, and originally was going to be called “The Reno Brothers.” With Elvis’ involvement, the title was changed to one of his hit songs. The film starred Richard Egan and the lovely Debra Paget, Elvis’ credit read “introducing Elvis Presley.” It was a fairly typical low budget western except for the four songs tossed in for Elvis to sing, along with a bit of shaky legs, and some girls in the crowd giving in to some half hearted screams that all seemed totally inappropriate for the Civil War setting.  Then there is Elvis’ horrible death scene, a guilty pleasure all itself, his acting is just dreadful; I believe he really died here of embarrassment and not from the gunshot wound. His next film, “Loving You,” would in many ways mirror Elvis’ life up to that point, that of a young country boy who becomes a big time singing sensation.  The film was a step up from his first feature; it even had an older woman, film noir favorite Elizabeth Scott, getting the hots for the young rock and roller. Still it was all very wholesome, even had Elvis’ mama in the audience for one scene while he is on stage singing, “Got a Lot of Livin’ To Do,” and his true love in the film was the virginal and future real life nun, Dolores Hart.

At this point in his rising career, Elvis was still jumping from one studio to another, each one trying to cash in on his popularity. MGM came next with the first of only two films where Elvis portrayed anything near a juvenile delinquent. In “Jailhouse Rock,” he is Vince Everett, a young punk who accidently beats a man to death with his fists after the guy starts to smack around a woman he thinks was flirting with Vince. Vince is sentenced to 1 to 10 years in the state prison where he meets Huck (Mickey Shaughnessy), a former Country and Western singer now doing his longest gig in the pen. Huck hears the kid sing, recognizes his talent and teaches him to play the guitar. The prison soon holds a talent show (don’t they all?) that is going to be broadcast on national television no less. Vince’s performance has hundreds of teen girls sending fan letters to their jailbird idol, letters that Huck, who practically runs the prison, manages to intercept and hide from Vince. Hard time goes by, you can tell this by the close up of a hand crossing out the dates on a wall calendar, how visually clever. Vince receives an inexplicable early release, surprising since he has turned into an arrogant, aggressive bastard. It can be assumed this personality change is suppose to be one of rebellion in the James Dean/Marlon Brando sensitive rebel without a cause tradition however, Vince just come across as a unlikeable boorish jerk who hates and resents everyone, even those who want to help him.

Old Huck, who still had some connections on the outside, arranges for Vince to get a job at some dive night club where he hopes to sing but the owner only agrees to give him a job bartending. At the club he meets a gorgeous young music rep, Peggy, portrayed by Judy Tyler (1), who despite his nasty demeanor, agrees to help him record a couple of demos and shop them around to the record companies. With no bites, they decide to start their own record company. Their first record takes off and soon the money starts rolling in, which is all Vince really wants. He again appears on TV, this time in a variety show special which includes the now legendary “Jailhouse Rock” number Elvis apparently choreographed himself. Just like with Elvis himself, Hollywood soon comes a knockin’ for Vince, however success has not eased his surly behavior. Peggy for some inexplicable reason continues to have a crush on the rocker but Vince’s only attraction is to the green bucks that are rolling in, and to a few blonde bimbos hanging on his arm. When Vince hurts sweet Peggy one time too many, Huck, who after being released from prison became a gofer for Vince, can’t take it anymore and decides to teach Vince a lesson in humility by punching him out. Unfortunately, one punch lands on Vince’s larynx. He is quickly rushed to the hospital where it is touch and go as to whether he will ever be able to sing again. Peggy and Huck are by his bedside. 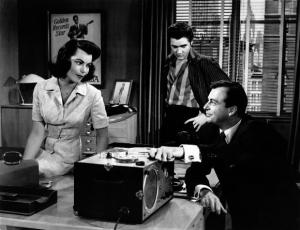 Huck begs for forgiveness, he didn’t mean to hurt the kid, just wanted to knock some sense into him. Huck breaks down crying, burying his head on Vince’s chest.  Vince, Christ like in his forgiveness, touches Huck’s head as if he is almost giving him a blessing (“You are forgiven, my son”). Vince has also had a grand revelation about Peggy, they hold hands, she promises to be there for him.

The doctors give Vince a clean bill of health. There is no medical reason he cannot sing but Vince is afraid he won’t sound the same and in some of the most unbelievable emoting ever put on celluloid Elvis, I mean Vince attempts to sing, hesitantly at first, but soon he is belting out “Young and Beautiful” with Peggy lovingly at his side.

A weak script, poor direction and a leading man who still was discovering his way in front of the camera, “Jailhouse Rock” had the making of a complete bomb. Yet, Elvis is charismatic, somehow rising above it all. The film’s highlights are mostly musical. Some of the songs are rather drab, though not as bad as some future tunes in much worst films with no pleasures of any sort, that would come later. The “Jailhouse Rock” number, one of his greatest rock and roll records, is the highlight. There is also a nice alternate rendition, (I actually like this version more the record, it has more bite) of “Treat Me Nice,” with the great songwriter Jerry Leiber (2) on the piano and Scotty Moore on guitar.

Then there is Elvis’ character who is a creep and not the sensitive James Dean rebel type. There is nothing likable about Vince other than he’s a young, virile looking Elvis. That of course was enough for his fans and the film made millions while costing MGM about thirty five cents (3).

That all said, “Jailhouse Rock” is one of my favorite Elvis movies, one of the few I can still actually sit through. It has nothing to do with the story or the filmmaking, it all about Elvis. He personified 1950’s cool in this film, his hair, the clothes, the turned up collar. Look at Elvis here and you realize how far he had fallen later on with those Las Vegas jumpsuits and fried banana sandwiches that helped filled them out. Here’s the rockin’ rebel singing a snappy devilish version of “Treat Me Nice” and rocking hard with “Jailhouse Rock.” I sit through the film just to watch all this and cringe at the rest.

(1) Sadly, Judy Tyler died in a car accident, along with her husband, three days after the shooting of “Jailhouse Rock.” Prior to the film, Tyler played Princess Summerfall Winterspring for two years on the 1950’s children show, “Howdy Doody.” Tyler was twenty five at the time of her death. It has been written that Elvis was so devastated by her death he never watched, “Jailhouse Rock” again.

(2) Songwriter Jerry Leiber, half of one of the greatest rock and roll songwriting teams, prior to Lennon/McCartney, passed away on August 22nd this year at the age of 78. Jerry Leiber and Mike Stoller wrote many of Elvis’ early great songs including “Jailhouse Rock,” “Treat Me Nice,” “Hound Dog,” “Loving You,” “Don’t” and “King Creole.” The prolific team also wrote or co-wrote such great songs for other artists including “Stand By Me” (Ben E. King, John Lennon), “On Broadway,” “There Goes My Baby” (The Drifters), “Love Potion No. 9” (The Clovers), “Kansas City” (Wilbur Harrison), “Poison Ivy,” “Charlie Brown,” “Yackety Yak,” “Youngblood”  (The Coasters) and “Spanish Harlem” (Ben E. King)  among many others.

(3) Oddly, when “Jailhouse Rock” opened in New York, it opened only at one theater, the Loew’s Metropolitan, in Brooklyn. The Metropolitan was one of Brooklyn’s premier theaters at the time still, it was a strange release pattern and unlike “Love Me Tender” which opened at the Paramount on Broadway.  It wasn’t until a week or two later the film opened in many theaters across the city including the Victoria theater on Broadway. Playing with the Elvis film was a second feature called, “Action of the Tiger” which starred Van Johnson and 1950’s French sex symbol, Martine Carol. Of more interest is that way down in the credits was a young Scotsman who would become one of the 1960’s best known stars and sex symbol, a young Sean Connery. The film was directed by Terence Young who would go on to direct “Dr, No.”