Spencer Tracy can act better than most others with one arm tied behind his back! He proves this in John Sturges terrifically well paced and tense film, “Bad Day at Black Rock.” Sturges paints a picture of a town that is barren, both physically and psychology. It’s a town with a dark secret cancer called hatred and it is slowly eating away at everyone in it.  Into this dust bowl comes John J. Macreedy (Spencer Tracy), a one armed stranger dressed in a black suit and tie which only accentuates his difference even more from the rest of the town. Like Gary Cooper’s Will Kane in “High Noon,” or Alan Ladd in “Shane,”  Tracy’s John Macreedy is one lone man who has to face evil alone. The film takes place shortly after the end of World War II when, for some, the Japanese were still seen as the enemy. Racial hatred simmers underneath the surface of the entire town. Like most racists it is their own fear and insecurities that drive them to action.

Black Rock is a small dusty whistle stop of a town where the railroad (the Streamline) always passes through, never stopping to pick up or drop off anyone. This time, the first in four years, it does stop and the folks in town are suspicious as to who this stranger is and what he wants. Small towns can be curious little places where local folks remain distrustful of outsiders and the outside world. That’s the way it is in Black Rock, it’s an inhospitable desolate place, where it can be cold in many ways other than the weather.

The town folk, led by Reno Smith (Robert Ryan), are made even more uncomfortable when they find out Macreedy is looking for a Japanese farmer by the name of Kamoko. His son saved his life in the war and Macreedy has a medal, posthumously awarded to his son that he wants to give him. But Kamoko is nowhere to be found. His home has been burned down and a suspicious burial site is nearby.

Reno doesn’t talk much but his actions, expressed with the assistance of two local thugs played superbly by Ernest Borgnine (Coley) and Lee Marvin (Hector), speaks loud enough.  Both men are physically intimidating, constantly in Macreedy’s face bullying him into a confrontation which to Coley’s eventual bloody surprise, and the rest of the town’s shock, the older and handicapped man handles well with a couple of well placed judo chops. When Macreedy’s suspicions give way to what happened to the Japanese farmer, his own life is suddenly in danger. He decides to get out of town only Reno and his stooges have cut off all possible ways to escape. 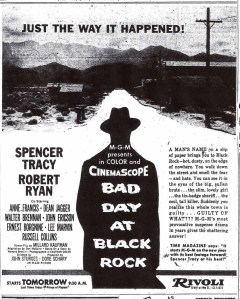 Doc Velle (Walter Brennan) the town’s local mortician/veterinarian is the one character whose moral compass still points in the right direction. He is the only one willing, and with the guts, to stand up to Reno and tries to help Macreedy get out of the town. A young Ann Francis, the only female character in the film, proves herself to be no better than the low-life men harboring the town’s dark past. Also in the cast is Dean Jagger as the town’s anemic sheriff, it’s a title in name only; Reno controls everything.

The screenplay was written by Millard Kaufman and Don McGuire based on a story called “Bad Day at Hondo” (1), (2) by Howard Breslin and photographed in Cinemascope by William C. Mellor. Sturges use of the then new cinemascope process adds to the sparse and stark emptiness of the landscape, you can almost taste the dirt and sand. (3)

Most impressive is how Sturges and the screenwriters build tension by holding back not just on the town people but on the audience as well, the reason Macreedy came to town. A good portion of the film goes by before we the viewer, as well as the town knows why. We are left to speculate just who this guy is and why he’s there; it’s an inspired, minimalist piece of work.

(1) The title was changed to “Bad Day at Black Rock” because the filmmakers did not want to confuse audiences with the John Wayne western “Hondo” released a couple of years earlier. Screenwriter Millard Kaufman one day stopped for gas at a station in Black Rock, Arizona and a new title was born.

(2) Five years later, MGM made a thinly disguised remake of the film called “Platinum High School” starring Mickey Rooney, Dan Duryea and Terry Moore in the roles originally portrayed by Tracy, Ryan and Francis. The film was a low budget mess from schlock king Albert Zugsmith. The location was changed from a small desert town to an exclusive private school located on a private island. Rooney is there to look into the suspicious death of his son who was a student.

(3) Exterior scenes were shot at Lone Pine, a popular location site over the years for filmmakers, on the edge of Death Valley in central California. The train tracks in the film have long ago been removed.