In a CBS Sunday Morning segment a while back, there was a piece on Cary Grant where Director and Film Historian Peter Bogdanovich told a story about how Grant and some friends went to a show one evening. Grant forgot his ticket and said to the ticket taker, “Excuse me, I forgot my ticket, I’m Cary Grant, is it okay if I go in?” The ticket taker took a good look at Grant and replied, “You are not Cary Grant!”  This leads me to what is the most obvious problem with Howard Hawks 1964 comedy, “Man’s Favorite Sport?” starring Rock Hudson and Paula Prentiss, which is, it needs Cary Grant, instead we get Rock Hudson, and Rock Hudson, with all due respect, is not Cary Grant.  Then again, who is?

Howard Hawk’s was one of the masters of screwball comedy. Back in its heyday of the 1930’s and 1940’s Hawks made some of the best in this sub-genre with films like “Twentieth Century,” “Bringing up Baby,” “His Girl Friday” and “I Was a Male War Bride.” Three of these four films happened to have starred Cary Grant. Grant was romantic, suave, debonair, and yet he could take a pratfall just about as good as Chaplin or Keaton. He also had a way with a line of dialogue that made even average lines sharp as a switchblade. He would have been perfect to play the bumbling Roger Willoughby in what would turn out to be Hawks final comedy. Grant and Hawks almost came to an agreement to work on the film together however, before signing contracts Grant opted out to make “Charade” instead with Audrey Hepburn.

Hawks chose to go with Rock Hudson as a replacement. Hudson was then one of the most popular stars of the early 1960’s, thanks to a series of romantic comedies (Pillow Talk, Lover Come Back and Send Me No Flowers) with sugary Doris Day.  Hawks was attempting to recapture the spirit of the screwball comedy in “Man’s Favorite Sport?” a story about a salesman for Abercrombie and Fitch who is well respected as a leading expert on fishing; he has even written a bestselling manual on the art of fly fishing. Only problem is, Roger has never fished a day in his life! No problem until he finds himself forced by his boss (John McGiver) to enter a contest where the head of public relations for the contest, a forward but beautiful woman named Abigail Page (Paula Prentiss), suggests to Roger’s boss that his participation would be great publicity for the company. What follows is a battle of the sexes via a series of mostly humiliating soggy experiences for our hero at the hands of the more experience Abigail when she decides to help Roger learn to fish. 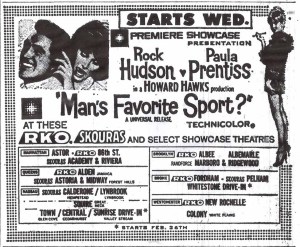 The two characters are at odds from the opening shot when they are first seen driving through the streets of San Francisco, and Abigail, soon after, takes Roger’s parking spot at his place of work. Throughout the film, Abigail’s out spoken flighty behavior and plain talk irritates an already disgruntled Roger who finds her continuously annoying since everything she says or does leads to trouble for him.

Based on a magazine story called “The Girl That Almost Got Away,” written by Pat Frank with a screenplay by John Fenton Murray and Steve McNeil, along with uncredited assistance from Hawks favorite Leigh Brackett. “Man’s Favorite Sport?”  is an enjoyable, if unspectacular, comedy thanks mostly to the under used, and sadly neglected, long legged Texas beauty Paula Prentiss, who is a pure delight as the brash, out spoken Abigail, the kind of woman Hawks had been known for in most of his films. Abigail comes across as a direct decedent of Susan Vance, Katharine Hepburn’s whimsical heiress in “Bringing Up Baby.”

Despite their sometimes adversarial positions, Abigail can’t help falling for Roger, she continuously makes sly hints of her attraction to him which even a complete idiot would realize, but somehow Roger does not, at least not until the final minutes of the film.

One only has to watch the scenes between Prentiss, a natural comedic actress with a perfect sense of timing, and Hudson, who lacks any sort of comedic rhythm and comes off rather wooden. I just can’t help but imagine how good Cary Grant would have been in this role. Prentiss is so good; she steals the movie from not just Hudson but everyone else including supporting cast members, John McGiver and Roscoe Karns.  My suggestion? Hawks should have pursued Jack Lemmon after Grant dropped out. Lemmon would have easily been a more formable co-star for the talented Ms. Prentiss. I actually salivate at the thought of Lemmon and Prentiss in this comedy together. (1) 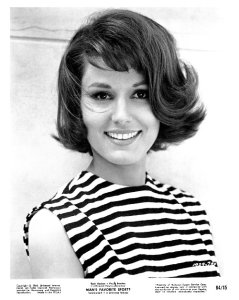 “Man’s Favorite Sport?” is not major Howard Hawks. It’s a bit too long and could have used some editing that would have made it all a bit tighter, however it remains lightly enjoyable and the script is adequately humorous. This makes the performances even more essential to its success or failure, and for me, this is where the two stars diverge. Prentiss raises the level of the film with her sparkling high energy, finely tuned performance, while Hudson seems to plod along like a lame horse limping across the finish line.