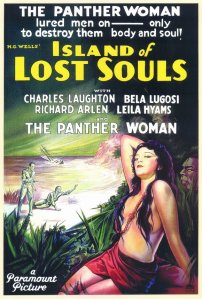 Audiences must have been shocked by “Island of Lost Souls” back in 1932. Bizarre, daring; a sadistic filled sideshow of strange creatures, and of course the perennial mad doctor. By then, the movies already had two other crazed doctors who believed they had God like power in both James Whale’s “Frankenstein” and Rouben Mamoulian’s “Dr. Jekyll and Mr. Hyde.” Then came Doctor Moreau.

The film is based on H.G Wells nineteenth century novel, “The Island of Dr, Moreau.” At the time Wells wrote the novel (1896), vivisection, the testing and experimental surgery on living animals without the use of any type of anesthesia, had gained some curious sort of acceptance in European circles. Wells novel helped lead to the forming of anti-torture animal groups such as “The British Union for the Abolition of Vivisection” set up to investigate, monitor, and ban the torturous testing of animals in scientific experiments.  But Wells was no fan of the movie and was frank in disparaging the film as a mockery of his work.  In Wells homeland of England the film was banned, along with “Freaks,” another “shocking” 1932 horror film, until the 1960’s. In the U. S. with state censor boards free to edit and cut scenes as they saw fit for local moral standards, many did just that.

With a screenplay by Philip Wylie and Waldermar Young, the story centers around Edward Parker (Richard Arlen), who is rescued at sea after his ship went down, by a vessel delivering supplies to an isolated and private South Seas island owned by Dr. Moreau (Charles Laughton). Parker soon after gets into a fight with the ship’s alcoholic and gruff Captain (Stanley Fields) and is tossed overboard right into Moreau’s supply boat that came out to meet the ship and pick up the supplies. At first, upset by his unexpected guest, Moreau soon decides to use Parker unknowingly in a test by mating him with one of his half animal half human experiments. He is  introduced to the beautiful Lota (Kathleen Burke). Parker, though engaged to Ruth Thomas (Leila Hyams), who has been attempting  find him, since hearing of his ship sinking, is enchanted  by the exotic temptress. While conversing with Lota, Parker hears screams coming from somewhere not too far away. Lota explains, this is the “House of Pain.” Parker investigates discovering Moreau’s torturous experimental surgery converting animals into humans. Parker also discovers Lota is one of Moreau’s experiments, a panther woman. When they kissed he felt her extremely long nails digging into his back. 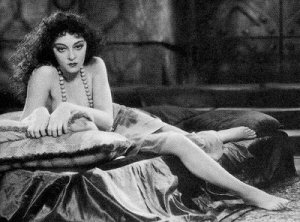 Moreau’ s world soon begins to crumble after Ruth, with the aid of Captain Donahue (Paul Hurst),  arrives to rescue Parker. The animal people comes realize their lord and master, Moreau, feels pain, just like they do, and are led to rebellion by Sayer of the Law (Bela Lugosi) chanting “Are We Not Men?”  Moreau, who would keep control with a few slashes of a whip has now lost any and all rule, meeting his demise as Sayer of the Law and other animal people overpower  their former master dragging him to the “house of pain” in what is still a wicked ending.

While the ending is still quite shocking, it does seem a bit rushed, almost as if the filmmakers wanted to get though the ugliness of the simian like creatures dragging Moreau to his own violent end, slicing and carving his flesh with his own devilish instruments that he once used on them. Thanks to Paramount’s masterful art department and Karl Struss’ cinematography, “Island of Lost Souls” is filled with plenty of sinister atmosphere and strange eerie jungle like imagery.

Charles Laughton gives a marvelous performance as the demented doctor who cracks a bullwhip to keep his experimental creatures in line. At one point he is a vicious monster, next he is like a mischievous cherubic little boy who knows he is doing something naughty but is going to do it anyway. It is this dark unexpected humor that adds a touch of relief to the proceedings, yet its contrast adds to its more shocking elements.   Laughton himself hated the film and was disgusted, rightly so, by some of the mistreatment of animals that occurred on the set. In a relatively small role is Bela Lugosi, as the Sayer of the Law, practically unrecognizable in his hairy ape man makeup.  Kathleen Burke won her role as Lota, the sexual charged Panther Woman via a Paramount studio contest winning, according to IMDB, over 60,000 other contestants. Her career was short and regulated to being type cast in mostly mysterious fiery roles. Gorgeous blonde Leila Hymns who plays Ruth Thomas, Parker’s fiancée, is regulated to a minor role but does come across as charming making you wish you would see more of her, more so than Richard Arlen’s Parker who seems like a complete dullard. 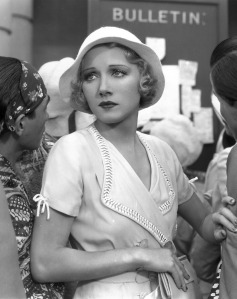 Though released during what is now considered the golden age of the horror film, “Island of Lost Souls” was surprisingly not a huge financial success at the time of its release. Its subject matter was somewhat sensational and did cause controversy with censors as previously mentioned. Certainly, the subject matter, for some  audience members, must have gone too far with the torturing of animals, cannibalism and mating of humans and animals. For depression era audiences, this may have been more than they wanted to know about or deal with.

Today, many viewers may find a bit of added unintentional humor when we here the chant, “Are We Not Men!” They may find themselves automatically responding, “We are Devo,” the question and answer representing the title of the first album (Are We Not Men? We Are Devo!) from the Punk/Art Rock group Devo, whose song,  “Jocko Homo” takes a satirical look addressing de-evolution.(1)

Surprisingly, film historian William K. Everson was not a fan of this film. In his now essential, “Classics of the Horror Film,” he writes the film has “all the ingredients but little of the mood required. One is often repelled by the film, but rarely convinced by it…”

Two inferior remakes, both called “The Island of Dr. Moreau” are reputed to be bad and badder.  I have seen neither of them so I cannot make any knowledgeable comments on them. The first, a Samuel  Z. Arokoff (2) production, came out in 1977 with Burt Lancaster as Doctor Moreau and Richard Basehart as Sayer of the Law, and from what I have read, the better of the two films. In 1996, the John Frankenheimer directed version with Marlon Brando as Moreau was released to horrible reviews, which I am personally sadden to say, because Frankenheimer, along with Hitchcock, Wilder and Blake Edwards was my earliest influences in becoming a cineastes.

(1) Devo’s first and most well known music video, “In the Beginning Was the End: The Truth about De-Evolution” is an extra included in the recently released Criterion DVD/Blu-Ray release.

(2) Samuel Z. Arokoff was co-founder of American International Pictures formed in the 1950’s with James H. Nicholson. AIP, as it was known, focused its attention on the emerging teenage market providing low-budget films to the indiscriminate youth of the day. Many of these films in such genres as horror, science fiction, gangster, rock and roll and let’s not forget beach party bingo surfin’ pajama films have become cult favorites over the years. AIP most famous director was of course Roger Corman who it is said could pump out a film in just a few days!