In the late 1940’s, director Fred Zinnemann made a loose trilogy of films depicting the effects of the post war aftermath. First up was “The Search” (1948) with Montgomery Clift as an American soldier helping a young boy search for his mother. The last film was “The Men” (1950) with Marlon Brando, in his film debut, as a paralyzed G.I. attempting to adjust to his new post war life.  In between these two works came the noirish thriller,” Act of Violence.”

“Act of Violence” explores the choices one makes creating the sometimes thin line between being a hero and an informer. Frank Enley (Van Heflin) is a war hero, maybe. He has a beautiful wife, (a young fresh faced, Janet Leigh), a young boy, a thriving business, a house in the California suburbs and is well respected in the business community. He goes on weekend fishing trips with his neighbor while the wives are happily at home. Into this tranquil and serene world comes Joe Parkson (Robert Ryan), a limping, gun carrying, revenge seeking former army buddy who is dead set on killing Frank. Parkson is sinister looking, seething with hate. Joe cannot forget or forgive what happened back when they were prisoners of war in a Nazi stalag camp. END_OF_DOCUMENT_TOKEN_TO_BE_REPLACED 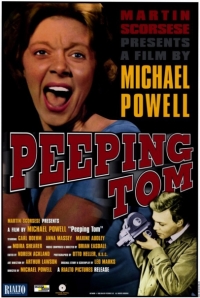 Voyeurism and the movies go hand in hand. After all what is looking at movies other than peeping into the lives of other people. The subject has been explored in many films, “The Conversation,” “Sliver,” “Blow-Up,”  and more so with directors like Brian DePalma in  “Hi Mom!, “Blow Out,” “Body Double” and with Alfred Hitchcock in “Rear Window” and  “Psycho.” More recently films like “Disturbia”, “Alone with Her” and “Vacancy’ have explored the topi c. However, no film connects voyeurism and film more than Michael Powell’s “Peeping Tom.”

Powell is best known as one-half of “The Archers”, the other half being Emeric Pressburger. Powell and Pressburger , produced, directed and wrote or any combination thereof some of the classiest British films of the 1940’s and 1950’s including “49th Parallel”, “The Life and Death of Colonel Blimp”, “Black Narcissus”, “The Tales of Hoffman” and “The Red Shoes.” Therefore, when this ‘nasty’ psychological thriller called “Peeping Tom” was released it came as a shock to both the critics and the public that this film was directed by Michael Powell. Reaction from the media and the public was so hostile, (the London Tribune said “The only really satisfactory way to dispose of ‘Peeping Tom’ would be to shovel it up and flush it swiftly down the sewer, even then the stench would remain”), the film was pulled from movie theaters in Britain quickly. When the film was released in the U.S. in May of 1962, it was a sliced and diced aborted version that did little business and died a quick death. Powell’s career was all but ruined. He managed to make a few more films, in Australia, which included “Age of Consent” with James Mason and a young Helen Mirren, but for all intent Powell’s career was ruined and pretty much over. END_OF_DOCUMENT_TOKEN_TO_BE_REPLACED

My next full length review with be up on Monday morning. The change in schedule is due to my participation in the Michael Powell/Emeric Pressburger blogathon hosted by the Classic Film and TV Cafe .  I will be contributing a piece on the 1960 film, “Peeping Tom.” In the meantime, I thought I would post seven short takes on some other films that I have recently watched.

When “The Sand Peebles” premiered in December 1966, the U.S. was already deep into its “quagmire” in Vietnam, a foreign policy disaster fueled by false fears that if one domino (Vietnam) fell, all the others in Southeast Asia would surely all fall too. Though set in 1926 in China, the analogy to Vietnam and the depiction of racism, prevalent at the time as well as the colonialism is all too clear.  “The Sand Peebles” is a three hour anti-war epic about the effects of wrong-headed foreign policy. Steve McQueen gives what is arguably his finest performance as a rebellious ship engineer. Richard Crenna is superb as the ships’ self-righteous Captain, as is Richard Attenborough as one of McQueen’s shipmates who falls for a local Chinese girl.  Visually, the film is epic and stunningly photographed. Only weak spot is Candice Bergen’s non-existent performance as a missionary. END_OF_DOCUMENT_TOKEN_TO_BE_REPLACED

By 1965, Steve McQueen was a star with hit films like “The Magnificent Seven” and “The Great Escape” already behind him. Yet, McQueen still had not proven he could carry a film, films where he alone was the big name. “The Honeymoon Machine,” “The War Lover” and “Hell is For Heroes” did little at the box office no matter what their quality. McQueen was still chasing the one actor who he saw as his rival, Paul Newman. With the release of “The Cincinnati Kid,” Steve would be on a cinematic roll pushing him through the stratosphere for the next few years equal to that of his screen rival.

I first saw “The Cincinnati Kid” in 1965 at a little theater in Downtown Brooklyn called the Duffield. Back in those days, this area of Brooklyn was a sort of mini Times Square with the boroughs largest and fanciest movie palaces all within walking distance. The Loew’s Metropolitan, RKO Albee, Brooklyn Fox and Brooklyn Paramount were all large grand scale theaters, each seating more than 3,000 people. The Duffield, on the other hand, was a small theater, approximately 900 seats, located on a side street (Duffield Street) just off Fulton Street, the main thoroughfare. McQueen was cool, as Eric Stoner, aka The Cincinnati Kid, his screen persona in full bloom. He had the walk and the look. He doesn’t talk too much but McQueen was always at his best when playing the silent type, it was all in his face and his body language. In truth, I was always more of a Paul Newman fan, but in this film McQueen was it, total sixties cool. END_OF_DOCUMENT_TOKEN_TO_BE_REPLACED

The film opens with a magnificent opening aerial shot, the camera roaming over the Los Angeles night soon descending on our two doomed protagonists, Steve Thompson (Burt Lancaster) and his former wife, Anna (Yvonne DeCarlo) embracing passionately in a nightclub parking lot.  The sultry Anna promising Steve they will be together, the way it was meant to be. The eyebrows of knowing film noir lovers will be raised, because as you know, in this dark world, a woman’s promise of eternal love to a man is a death trap with no way out. Steve is the prototype film noir sap, head over heels stuck on a dame who is no good, pure evil, only he is too blind to see.  Blinded by love and sex, he is a pawn in a game he does not even know he is playing, while all the dame sees is dollars signs. Men are only there to be used by this kind of woman. Love? Love is a loser’s game. Her motto, as she tells the dumb sap late in the film,  “you have to look out for yourself.” END_OF_DOCUMENT_TOKEN_TO_BE_REPLACED