20th Century Fox produced a series of semi-documentary film noirs in the late 1940’s including “Boomerang!,” “Kiss of Death,” “House on 92nd Street” and “Call Northside 777,” the last three directed by perennial hard ass Henry Hathaway. Hathaway was a studio director, a craftsman whose work was devoid of complexity, straightforward and took no crap from anyone (see my interview with Dennis Hopper biographer Peter L. Winkler who talks about Hathaway’s battle with young know it all Hopper and how he single handedly blackballed Hopper from Hollywood films.). Despite any lack of pretension in his work Hathaway directed some fine film noirs. In addition to those previously mentioned he made “The Dark Corner” and “Niagara.”

Based on a true story, “Call Northside 777” tells the tale of Frank Wiecek (Richard Conte), a Polish-American falsely accused of murdering a police officer. (1) After spending 11 years in jail for a crime he did not commit, his story is assigned to Chicago Times news reporter Mickey McNeal (Jimmy Stewart) when it comes to the attention of his editor Brian Kelly (Lee J. Cobb). Kelly had spotted a notice in the classified ad column, a $5,000 reward for information leading to the killer of a police officer back in 1932, 11 years ago, during the height of the prohibition era. McNeal follows up on the story and discovers it is Frank Wiecek’s mother, Tillie (Kasia Orzazeski) a scrub woman in a office building who put up the reward saving her paltry salary ever since her son’s conviction. McNeal follows up with a visit to the Illinois State Pen where he talks to Frank only to find his story full of dead ends that cannot be proven. Frank though seems resigned to his fate, he will be spending the rest of his life in prison. Frank even told his wife Helen (Joanne De Berg) to divorce him and marry someone else so their son will have a full and happy family and not be haunted by his father’s past. After McNeal writes about the family, exposing their current lives, an incensed Frank demands they be left alone and wants the entire investigation stopped accusing McNeal of writing his story only for the newspapers’ circulation gains. He rather spend the rest of his life in prison than subject his kid and ex-wife to public scrutiny. 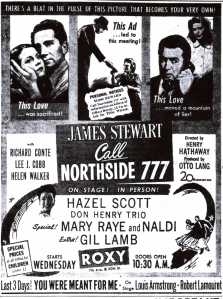 McNeal’s attitude toward Frank begins to change and he comes to believe Frank was unjustly convicted. The problem now it proving it since most of the information supporting his innocence is circumstantial and will not convince a parole board to free him. The key to breaking through in proving Frank’s innocence is the one witness, Wanda Shutnik (Helen Garde), the owner of the speakeasy where the shooting of the police officer occurred. Wanda identified Frank, and another innocent man, as the shooters, and even after all these years won’t change her story. As McNeal digs deeper he finds inconsistencies in police files and Helen’s statements about when she first saw Frank. The breaking Helen Shutnik’s story convinces the parole board to release Frank. He is hastily reunited with his son, ex-wife and her husband, an unbilled and very young E.G. Marshall, who promises Frank he can see the boy anytime he wants. This all happens as McNeal looks on in the foreground. 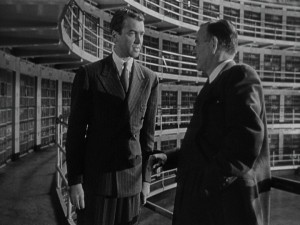 Filmed entirely on location in Chicago where the real story happened, using actual locations, like the then new Statesville Prison where McNeal interviews the other man arrested for the murder of the police officer. This scene is nicely shot as we watch McNeal walk along the catwalk of this gigantic circular cell-block. Additionally, adding to the local flavor was the use of locals Polish-Americans living in the community.

James Stewart had just finished a seven week engagement on Broadway taking over the role of Elwood P. Dowd in the Mary Chase play”Harvey.” The play,which had been running on Broadway since 1944,was a huge hit with Frank Fay originating the role of Dowd. The play’s run ended 1,775 performances later in 1949. For seven weeks in 1947, Stewart took on the role in what would be a successful attempt to convince Universal Studio he was the man to take on the role in the film version. It worked and became one of Stewart’s signature roles.

Stewart’s Mickey McNeal is an amalgamation of two journalists who worked on the actual real life case, one was James P. McGuire who worked on the film as a consultant. McNeal was one of the first cynical, darker characters Stewart would portray. A side of his screen persona he would continue to pursue in more derisive roles later on in films with Alfred Hitchcock (“Rope,” “Rear Window,” “Vertigo”) and in a series of Anthony Mann westerns. This role was also one of eight real life character’s Stewart portrayed in his career, the others being Charles Lindbergh (“The Spirit of St. Louis”), Glenn Miller (“The Glenn Miller Story”), Monty Stratton (The Stratton Story) David Marshall “Carbine” Williams (“Carbine Williams”) Tom Jeffords (“Broken Arrow”) and Wyatt Earp (“Cheyenne Autumn”).

Richard Conte’s role is somewhat restricted by the script. He is in prison for most of the film and overall his role is not very large still he does a fine job. Lee J. Cobb makes for a perfect newspaper editor with his cigar and gruff, fatherly like figure. Cobb is almost incapable of giving a bad performance. Helen Walker is fine in a comforting role as Stewart’s wife. Walker had a tragic life dying at the age of forty eight. In 1946, she was involved in a serious auto accident where one person, a hitchhiker, died. Walker was charged with drunken driving and was subjected to a civil lawsuit by another passenger. She was later cleared of the charges however her career was damaged and though she continued to work her days on the fast track were over.

Others in the cast include John McIntire, Lionel Stander, character actor Charles Lane along with Al Capone and John Dillinger in newsreel footage. The stark effectively brilliant black and white cinematography is thanks to Joe MacDonald who also makes great use of the Chicago urban locations. You also get a nice feel, especially in the early scenes, for the city’s immigrant population and blustery cold weather. The film displays quite a bit of what was then modern technology as used by the police and Stewart’s newspaper in helping to prove the prisoner’s innocence. A lie detector, photo copier and darkroom photo enlargement techniques all contributed to providing evidence of Frank Wiecek’s innocence.

The film is based on newspaper articles by James P. McGuire  and Jack McPhaul, both men worked for The Chicago Times, with a screenplay by Jerome Cady and Jay Dratler. Reviews at the time were generally favorable and the film was big hit. With “It’s a Wonderful Life” and “Magic Town,” his first two films since returning from military duty not financial successes at the box office, “Call Northeast 777” was Stewart’s first big hit since the war.

(1)  Here is a link to the real life story of Joseph M. Majczek whose wrongful conviction was the basis for the film.