Gable and Harlow battle it out on the high seas. A typhoon, marauding pirates and hidden gold are no competition for the fiery heat generated between two of MGM’s biggest stars. Gable is the hard drinking Allan Gaskell, Captain of a freighter heading from Hong Kong to Singapore. He wants to change his lifestyle, turn over a new leaf, after meeting upper class British lass Sybil Barclay, surprisingly played by Rosalind Russell. He plans to marry Sybil, and forget about the sassy  talky dame Dolly Partland, aka China Doll (Jean Harlow), who he has had an on again, and off again, love affair with.  Dolly still has a thing for the Captain and arranges to get herself on board the freighter for the trip in an attempt to win back him back from the upper crust Sybil. Also on board is Jamesy McArdle (Wallace Beery), a conniving worm who is in cahoots with Malaysian pirates to attack the ship seeking the stash of gold being transported. Losing out to Sybil in the Gable love triangle, Dolly licks her wounded heart by teaming up with the slimy McArdle in a revengeful attempt to steal the gold. 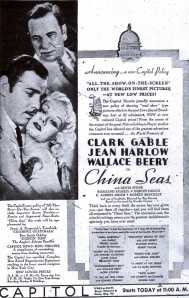 The MGM production, under the guidance of Irving Thalberg, was a big adventure film with more than $500,000. spent on special effects, a large amount for the time, including a typhoon and a battle with a pirate ship that is eventually blown up. In addition to the four main stars in the cast there is a plethora  of wonderful character actors on board including Lewis Stone, C. Audrey Smith,  Robert Benchley, Akim Tamiroff, Lilian Bond, Hattie McDaniels, and even an then unknown Donald Meek in a bit part. Benchley’s portrayal of an alcoholic passenger is both funny and ironically poignant since by this time in his life he was already a heavy drinker, and would be dead only ten years after the making of the film due to complications from cirrhosis of the liver. He was only 56 years old.

The script was written by Jules Furthman who wrote or co-wrote such classics as “Shanghai Express,” “The Big Sleep,” “Only Angel Have Wings,” and “Rio Bravo.” There were other contributors to the script of whom the most noteworthy was John Lee Mahin (“Red Dust,” “The Horse Soldiers” and “Johnny Eagar”). One needs only to note the similarities in storyline and characters to the earlier Gable/Harlow film, “Red Dust” (1932) to recognize Mahin’s contributions to the screenplay. ”

China Seas” was Gable and Harlow’s third film together as top MGM stars, (1) this was their first screen appearance together since the 1933 film “Hold You Man.” While there are similarities between “Red Dust” and “China Seas” there are some significant differences mainly thanks to the Legion of Decency and the newly enforced Production Code. While Gable’s characters in both films remains the kind of rugged,manly gruff talking,take no crap kind of guy, his way with the women in his life has changed. In “Red Dust” it’s made clear Gable beds both Harlow and Mary Astor while in “China Seas,” he gets no further than a few kisses with the ladies. Harlow’s character in the pre-code film is clearly a prostitute however, in “China Seas” though she is still sassy and has a loose demeanor; her character’s profession is now that of an “entertainer.” “China Seas” ending is also significantly different. In “Red Dust,” Harlow’s character is content to remain single and bed down with Gable while in “China Seas,” despite Harlow last seen going off to jail, Gable promises to wait for her, and marry her, in an odd twist forcing a happy and production code friendly ending.  Another change made prior to the start of filming involved the Harlow character, Dolly Partland. Jules Furthman originally envisioned a mixed race romance with the Captain marrying a Chinese woman and soon after they would have a child. The newly enforced Hays Office would never have approved a script with miscegenation, a topic high up on its list of taboo subjects. Subsequently, Furthman changed the character into Dolly Portland, aka China Doll, a brassy, trash talking floozy, just right for raw sexuality of Jean Harlow. 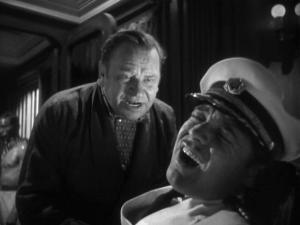 One of the more surprising bits in the film is a fairly graphic torture scene. After the Malaysian pirates overtake the freighter with the help of Beery, Gable’s right foot is put into a vise like devise and squeezed as they attempt to get him to reveal the location of the gold on board the ship. Gable of course reveals nothing, and suffers three tightening, painstaking squeezes of the vise for his manliness. Unlike today films though, there are no extreme close ups of his foot being crushed but the scene is still powerful enough to make you go ouch!

I never viewed Clark Gable as a great actor, but he had what one could say was a strong dose of cinematic charisma that explodes on to the screen overshadowing everything and everyone else.  Here he plays his standard macho man type, snapping orders, and charming the women. Harlow too, is in what was a standard role for her, a woman of questionable morals, feisty, and illuminating sexual heat.

The film was directed by Tay Garnett, a prolific director whose work is marked by one of inconsistency and lack of any style. His films include “Seven Sinners,” “Bataan,” “My Favorite Spy,” “Stand-In”  “Cause for Alarm,” “A Connecticut Yankee in King Arthur’s Court” and arguably his most notable film, “The Postman Always Ring Twice.” His later years were spent directing television, “Wagon Train,” “Naked City,” “Rawhide,” Bonanza” among many others, where his nondescript style fit perfectly.

(1) Prior to becoming leading actors, Gable and Harlow also appeared in supporting roles in “The Secret Six” (1931) which coincidently starred Wallace Beery.