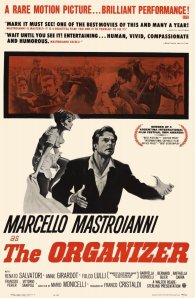 “The Organizer” is a tough film to describe. Is it a tale of exploited textile workers fighting for better working conditions? A dark comedy? A human drama of class warfare? Well, the answer is yes to all. Set in very early years of the twentieth century in Turin the story focuses on the laborers in the town’s textile factory where the working conditions are harsh and the hours long. They arrive at 6 AM and leave at eight that night with only a half hour for lunch. The machines are dangerous, and there are certainly no health benefits in case of an injury. The workers slave for fourteen hours a day for a minimum wage. When one of the workers is injured in an accident the co-workers collect money to help out the family though they hardly have enough for themselves. Frustrated, the men and women stage a walkout but fail miserably when they neglect to support Pautasso (Folco Lulli), one of the leaders, who is suspended for two weeks. The others are penalized for the time taken off during the strike; they will now have to work on the job with no pay.

Into their work world arrives a shaggy professor named Sinigaglia sharply portrayed by Marcello Mastroianni.  The professor is an odd character, on the run from the law, he is part absented minded, part inspiring orator who will lead his flock down a path to fight for better working conditions and  self esteem. In the end, the workers don’t win, the professor is arrested, and a teenage male worker is shot dead by soldiers protecting the factory from being overrun by striking workers. We are left with the image of the dead boy’s younger brother, who at the beginning of the film was still in school, now forced to take his older brother’s place in the factory so the family will have money for food and clothes.

Directed by Mario Monicelli, who gave us “A Big Deal on Madonna Street,” the film reflects the earliest attempts at a labor movement in Italy for workers to unionize in their fight for improved working conditions and an overall better life. The film moves through  episodic scenes, the poor living conditions of the workers, the conflict between northern and southern Italians, the rich factory workers and the little regard they have for their workers all coming to a boiling point that explodes in the tragedy of one boy’s death and failure.

While the film’s ending is down beat, Monicelli finds plenty of humor in between the harshness of his characters lives and struggles. That is the way life is sometimes with humor buried in the darkest places.

Today the film can be seen as a reminder of what the importance of unions meant to the working class. Today, unions are generally considered obsolete by many or viewed as money grabbing robbers who hinder the free marketplace. Still, here we are today with corporation’s raking in high profits yet refuse to hired more workers, requiring employees to work longer hours and generally do more with less.  Hiring will cost money, profits will be driven down and upset millionaire stock holders (Mother of mercy, we can’t let that happen!).

The workers are looked down upon by the textile company’s managers and owners. At one point when management agrees to negotiate with the workers their big concession is not to penalize Pautasso, the leader of the first strike, giving him his job back with pay, and forgiving the others who joined in on the strike. There is no concession to less working hours, more money or better conditions in the factory; they are no better off than they were before. In fact, management is even shocked when the workers have the nerve to even bring up the possibility of working a shorter day.

One thing to note it is the opening montage of photographs blending historical pictures with grainy stills from the film.  These interspersed photographs add a sense of realism and period to the story that is about to unfold. This technique was used in a similar approach a few years later in 1967 by Arthur Penn at the beginning of “Bonnie and Clyde” again blending in historical photographs with fiction.

Marcello Mastroianni was riding a wave of successful films both artistically and in popularity during these years. In New York, “Yesterday, Today and Tomorrow” was still playing at two uptown theaters when “The Organizer” opened up. In this film, you can see why, he is magnetic; it’s a wonderful studied performance of a vagabond fugitive who becomes in effect the leader of the laborers unrest. He is a man still finding his way as a leader while remaining on the run from the law. Mastroianni’s character is a study in human nature. Early in the film, in a moment of hopelessness, he grabs a sandwich left behind by one of the workers. Just as he is about to take a bite, the worker returns. He awkwardly looks at both the worker and sandwich, wraps it up and gives it back to its owner.  At the other end of the spectrum, the professor has evolved into an excellent speaker delivering a rousing oratory firing up the laborers not to give up, but to stand up, and face the factory bosses.  However, the film’s focus always remains on the worker’s and their very human struggles at home and at work with their tyrannical bosses who even bring in the Army during the climatic ending. Mastroianni’s character is just another role, and not a star turn, in fact, he does not appear on screen until approximately a half hour into the film. French Actress Annie Girardot (Dillinger is Dead, Vice and Virtue, Story of a Woman)) and Bernard Blier (The Tall Blonde Man with One Black Shoe) co-star.