A brilliant, creepy, unsettling film about a crazed doctor who kidnaps a series of beautiful women, surgically and methodically removing their faces in hopes of transplanting successfully one on to the deformed face of his daughter. Just as you squeamishly hope director Georges Franju will move his camera away from the procedure, he stays securely in place forcing the audience to watch the complete removal of the face as if it were a delicate mask being lifted off, soon to be grafted on to the head of his deformed daughter, Christaine. It’s an unsettling scene, and an amazingly graphic one, considering the film was made in 1960, a year that historically has turned out three master works of horror, Hitchcock’s “Psycho” and Michael Powell’s “Peeping Tom” being the others. 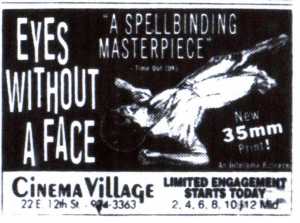 In some ways the film is reminiscent of many other horror films, the mad doctor, obsessed with playing God, think Dr. Moreau, Dr. Jekyll, and Dr. Frankenstein to name a few. In this case, it is Doctor Genessier (Pierre Brasseur) whose beautiful daughter was severely injured in a car accident for which he was responsible. Being a good father, he wants to help his daughter to look beautiful again. Thus begins a series of kidnappings of pretty young things as the doctor attempts to remove the facial skin of his victims and in an extreme case of plastic surgery graft the removed victims face on to his daughter’s. Each attempt has been a failure, as one expects the bodies of missing young women are beginning to pile up.

The doctor is assisted by his loyal and attractive assistant Louise (Alida Valli) whose has had some work done herself. The film opens with Louise driving in the dark of the night to a secluded spot to dump the body of the doctor’s latest victim. Sadly, each experiment fails, leaving the Doctor’s daughter Christiane (Edith Scob) deeper and deeper in despair. 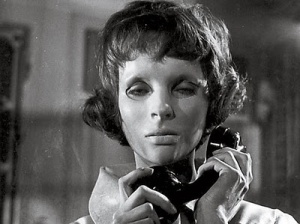 The film is based on a novel by Jean Redon, adapted for the screen by Redon, Claude Sautet, who also was Assistant Director, and the team of Pierre Boileau and Thomas Narcejac. Boileau and Narcejac are best known for their novels “D’Entre Les Morts” and “Celle qui n’était plus” which themselves are better known by their film titles, “Vertigo” and “Diabolique.”

Director Georges Franju avoids the standard modus operandi of many horror films, the quick cuts, the tense music that builds up with a calculating beat that something dreadful is about to happen. Instead we get some magnificent eerie, moody photography creating a foreboding atmosphere of dread and fear, also an early music score by Maurice Jarre that is at times almost circus like, adding a strange macabre mood to it all.  Do not misunderstand, Franju does not shy away or forget he is making a horror movie. As mentioned, the film contains some of the most disturbing and unflinchingly graphic scenes to ever appear in a horror film from this period, in fact, if you about to undergo cosmetic surgery in the near future you may want to avoid this film.  Even today these scenes remain very disturbing.

The film was originally released in the United States in 1962. Back then horror films did not receive any respect from the art house/intellectual film audience and when released in a dubbed version as part of a double bill with “The Manster,” another film about a crazed doctor and his strange experiments, the film sank quickly. Even changing its title to “The Horror Chamber of Dr. Faustus” did not help. But over the years, “Eyes Without a Face” has risen from the “B” film grave and has gained the respect it has been denied. In 1995, the film was released in a new 35MM print and played at the Cinema Village in New York and a few other cities.  In 2003, during the Halloween season, the film appeared again, in another new print, for two week engagement at the Film Forum in New York.

“Eyes Without a Face” is a masterpiece of horror, an imaginative, nightmarish, poetic dream that you will soon not forget.