“Illicit” was only Barbara Stanwyck’s fifth film and she was already a star. Having just appeared in Frank Capra’s “Ladies of Leisure” as a prostitute, or as they would call it, a ‘party girl’ for Columbia, Babs, who had arranged for non-exclusive contracts with both Columbia and Warner Brothers, starred in her next film  for Brothers Warner as a free thinking woman, a post feminist long before the term was even conceived.

Stanwyck is Anne Vincent and her lover, James Rennie, is wealthy Richard “Dick” Ives II. They have been happily living out of wedlock, going away together for weekends, enjoying life, but she refuses to marry Dick who wants to marry her. Anne explains her theories on marriage, how married couples become complacent, have kids and begin to take each other for granted leaving the fun and romance behind. Anne wants none of that. Eventually though pressure from friends and family force the couple to marry. Once married, egos get hurt, misunderstandings come out of the closet as well as former lovers. From Anne’s past comes Price Baines, played smoothly by Ricardo Cortez, who keeps popping up to complicate the situation. Late in the film Dick is about to run off with a former girlfriend (Natalie Moorhead) when the couple come to the realization they only want each other. 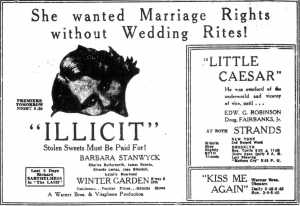 Stanwyck was all of twenty-three when the film was made and is just plain cute and refreshingly irresistible. Her previous film, the aforementioned “Ladies of Leisure” was a huge success and she was in big demand with both Columbia and Warner Brothers.

“Illicit” is not a great pre-code masterpiece, but Stanwyck’s performance and some witty risqué lines keep it entertaining enough.  Here’s an example.

Early on, Stanwyck’s character tells her lover, “Go on Don Juan, tell me about yourself.”

“Well, there have been woman who wanted to park their heads on this manly bosom” He replies with some macho pride.

“At how much an hour?” Stanwyck snappily responds.

Stage actor James Rennie, Stanwyck’s lover and husband in the film, had a moderate career and is most likely remembered best as being married to Dorothy Gish. Also in the cast are Joan Blondell and Charles Butterworth, as close friends of the couple. Butterworth’s character seems to be drunk throughout the entire film. Having an alcoholic character was common in films back then, it was considered humorous, but I found it just kind of sad.

“Illicit” was the first teaming of Stanwyck and Joan Blondell who became good friends in private life. Later the same year Stanwyck and Blondell would make “Night Nurse” for director William Wellman. Five more Stanwyck/Blondell films would follow. As mentioned, Ricardo Cortez has a supporting role as one of Stanwyck’s former lovers and still has some strong desires for her. Throughout the film he is waiting on the sidelines for her marriage to fail.

Directed by Archie Mayo, the film is somewhat sluggish at times and the first act is stage bound with the first half hour or so taking place on one set. This probably should not be surprising since the film is based on an unproduced play by Robert Riskin and Edith Fitzgerald, Riskin’s lover at the time.  From what I have read, as a director, Archie Mayo was no great technician. For acting technique he depended on the actors to create their own characters adding very little. This worked well for Stanwyck who at only twenty-three was very professional and in total command of her performance. She comes across as sincere, charming and playful. Everything you see on screen is pure Stanwyck.  Not knowing much about the camera or sound, director Mayo also depended on his cameramen and sound engineers for their personal knowhow in getting the job done.

The film was not the big critical and financial success of Capra’s “Ladies of Leisure,” her previous film, but it did well enough. It was the first film in which Barbara received top billing and she is listed in the opening credits as ‘Miss Barbara Stanwyck,’ a title Warner Brothers would use in most if not all of her future publicity. Only three other actors were given this honor in film, Miss Ruth Chatterton, Mr. George Arliss and Mr. John Barrymore.

Two years later, in 1933, “Illicit” was remade as “Ex-Lady” with Bette Davis in the Stanwyck role.