Nothing seems to make sense in “Kiss Me Deadly,” even the opening credits roll backwards. Author Mickey Spillane hated the movie, screenwriter AI Bezzerides hated the book and film goers back in 1955 must have been confused with what it was they were exactly looking at. Sure there was a P.I. and plenty of hot looking dames with legs that went from one end of the screen to the other but, this is the 1950’s, the time of The BOMB, we’re not just dealing with dope here, this time it’s serious.

Ralph Meeker’s Mike Hammer may just be the dumbest P.I. to ever grace the screen, still director Robert Aldrich gives us one of the great film noirs of all time with a touch of science fiction tossed in just for good measure. It’s violent, sexy, nasty, and one of a kind. The film’s ending is one of those, to use an antiquated 1960’s term, mind blowing, one of the great film endings that will stay with you long after the film is over. Meeker is perfect as the thuggish Mike Hammer, a bedroom dick, who is not beyond letting his secretary/ lover, Velda (Maxine Cooper) have sex with someone just to gain information on the case.

The plot is not important, it’s off the wall, just like its characters, written like the screenwriter had been up all night drinking scotch and popping Benzedrine’s. Spillane’s novel was about drugs and big money but that thought, already old hat in the 1950’s, was tossed out, as was the New York setting, we are now in La La land, Los Angeles. Hammer’s character was also modified from a self-righteous avenging angel dealing out vigilante style justice, to a guttural not too bright P.I. who seems to miss more clues than he catches and has to reply on pushing, beatings, blackmailing people, innocent or not, into submission for information. He has a sadistic streak, one he seems to relish too much applying it to his victims. In one scene, he questions a man who turns out to be innocent. He barges into the man’s apartment and begins breaking his prized Opera LP collection. As he attempts to draw information out of his victim he has a smirk on his face through it all. You are left with the impression Hammer enjoys his work a bit too much…and I think it is safe to say he is not a big Opera fan either. 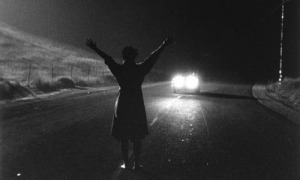 Hammer is in over his head, only his is too stupid or stubborn to realize it. The film opens with him driving down a California highway where he picks up an hysterical woman named Christina (Cloris Leachman), naked except for a raincoat, who throws herself in front of his sports car. Soon after, they are run off the road by some underworld characters. Hammer is knocked out, the woman is sadistically tortured. Both unconscious, they are put back into Hammer’s car, pushed off a cliff and left for dead.  Hammer wakes up in a hospital, Christina didn’t make it. He sets out to find who did this, not so much for the dead girl but because these guys ruined his car.

There is also a mysterious black box that is of interest to everyone. What’s in the box? Well, in the book it was a lot of money, but that was too drab for Aldrich and Bezzerides, they had something ‘bigger’ in mind. They were talking the Manhattan Project, end of the world, the great whatsit!

The film’s final shots generated controversy after the original ending mysteriously was altered soon after the film was released. As shot by Aldrich, Hammer and Velda escape from the house as it explodes around them. The film ended with a shot of them both in the ocean as ‘The End’ appears on the screen. The altered jumpy ending ends with the explosion of the house as ‘The End’ is superimposed on screen implying that Mike and Velda were still inside the house after the atomic blast.  Aldrich had no idea how this second ending ever happened. It certainly was not his idea or his doing. The film’s distorted ending stayed that way until sometime in 1997 when the original missing scenes were finally restored. The Criterion release contains the original ending and the altered ending as an outtake.

Unlike earlier screen P.I.’s whose image was that of a romanticized loner, an antihero with a moral streak of his own, say like Bogart’s Philip Marlowe or Sam Spade, Mike Hammer is a scum bucket low life on the same bottom feeding level as his clients. As J. Hoberman writes, Hammer is “a vigilante enforcer who was detective, judge, jury, and executioner in one. Spillane offered his readers God’s Angry Man—a function that would later be satisfied by irate evangelists and talk-radio personalities, as well as fictional characters like Dirty Harry.” In cinematic terms Harry Callahan may just be the illegitimate son of Mike Hammer.  Both men had contempt for following the due process of law; instead they dealt it out on their own terms. 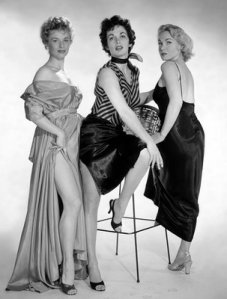 The first Spillane novel to hit the screen was 1953’s “I, The Jury” starring Biff Elliot (how’s that for a name! Of course this was the age of actors with names like Rock and Tab so why not Biff). Two years after the Aldrich film came the low budget “My Gun is Quick” with Robert Bray. In 1963, author Spillane portrayed his own character in the  mediocre “The Girl Hunters,” the only one of these early films I have seen. Spillane is a worst actor than he is a writer. The film’s only redeeming value is English actress Shirley Eaton who displays her figure to great advantage in a poolside scene.  Almost twenty years later Hammer made it back on screen, this time in the guise of Armand Assante, in another middling version. Mike Hammer also made it to TV a couple of times, first back in the late 1950’s with Darren McGavin and then  in the late 90’s with Stacy Keach.

The Aldrich film remains the richest and the best. “Kiss Me Deadly” with Robert Aldrich’s fifth film as a director, he second in the world of film noir. His first noir was “World of Ransom,” a film about the kidnapping of a nuclear scientist held for ransom to the highest bidder. The film would set the stage for future Aldrich antiheroes, cynics who traveled alone in the world according to their own ethical code. 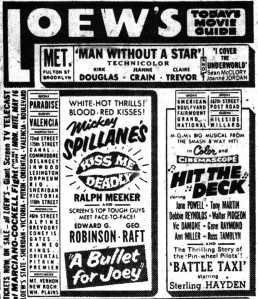 “Kiss Me Deadly” opened up in New York at the Loew’s Metropolitan in downtown Brooklyn, and one has to suspect the studio had little faith in the peculiar hybrid of a picture, that it was being dumped in the market, written off as a loss. You see, when your film first opens up in the New York of the 1950’s you want it to be on Broadway. Now, the Loew’s Metropolitan was not a dumpy theater, it was one of the more prestigious movie palaces in Brooklyn, with over 3,500 seats, but it was still Brooklyn and not Manhattan.