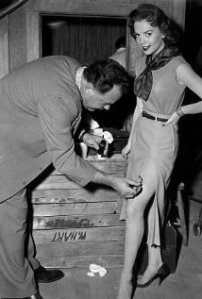 I wonder when they named this picture, “A Cry in the Night,” whose tears they were referring too, Natalie Wood’s character perhaps, who is kidnapped in the middle of the night or maybe the audience who had to sit through this cliché ridden tale about a child-like adult (Raymond Burr), think Lenny in “Of Mice and Men,” who watches young couples making out at a local lover’s lane.

After knocking out her boyfriend old Raymond kidnaps Ms. Wood taking her to his secret hideout where he confesses he just wants to be ‘friends.’  Yes, Nat makes a couple of feeble attempts to escape but in the end only manages to ripe her skirt so she can reveal some leg in order to keep the males in the audience awake.   Wood’s father, played by Edmond O’Brien, is an overbearing, over protective, sexist who finds it hard to believe his eighteen year old daughter would  willingly go to a lover’s lane of her own free will after he forbid her too. In fact, ole’ Edmond seems more concerned with wanting to beat the crap out of the boyfriend for this dirty deed than finding his daughter. Oh yeah, by the way, he’s a cop who naturally wants to be involved in the case though he should not be. The cast also includes Brian Donlevy as the sensible cop who attempts to control the out of control O’Brien. As directed by Frank Tuttle, there is nothing original here, to say the least. Tuttle is best known for making “This Gun For Hire” some fourteen years earlier which made Alan Ladd  a star. Ladd, by the way, is the narrator who opens the film and his company co-produced the film.

Diana Dors, Britain’s answer to 1950’s blonde bombshells like Marilyn Monroe, Jayne Mansfield and Mamie Van Doren, stars in this sleep inducing, moody, suspense film. When we first meet Phyllis she is already in a jail cell. Stripped of makeup, a mousy hairdo, she comes across as anything but alluring.

As the widow of an air force pilot Phyllis is making  a living as a high price bar girl, along with Marie Windsor in a small meaningless role, when she meets Paul Houchen (Rod Steiger), a lonely man who runs a family vineyard in the California valley. They soon marry and Phyllis, along with her young son, moves into Paul’s mansion where Paul has been living with his elderly irritating mother (Beulah Bondi).

Phyllis is restless, bored, moody and probably sexually frustrated; her husband is more interested in his vineyard and its tender grapes than his wife and her voluptuous body. We later find out in a ‘confession’ to his priest brother that Paul only married Phyllis because he was incapable of having a son due an injury during the Korean War.  What the injury was we are never told. Not showing much affection toward his wife, she begins an affair with a handsome hired hand named San Sanders (Tom Tryon). Her restlessness turns deadly when she hatches a plan to shoot her husband using the excuse she thought he was a prowler. The plan backfires taking a sharp left turn when she inadvertently shoots Paul’s best friend Gino (Gilbert Roland). But Phyllis quickly recovers using the opportunity to come up with an alternate plan in which Paul takes the rap for shooting.

“The Unholy Wife” cries out for a devilish femme fatale ala Barbara Stanwyck in “Double Indemnity” but Dors Phyllis Hochen fails to deliver the goods. The screenplay by Jonathan Latimer becomes way too complicated and John Farrow’s direction is rather pedestrian. What does help lift the film a bit is Lucien Ballard’s dark moody color photography that actually reminds you of Gordon Willis’ work in “The Godfather.”

It’s not a happy time for Timothy Borden (Walter Connelly), corporate head of the Amalgamated Pump Co. What with union troubles, a wife that may be cheating on him, a son who is more interested in polo than taking over the family business and a daughter who is in love with the family chauffeur. Oh and it’s his birthday and nobody cares…

Feeling the pressure of business and unwanted at home, at the suggestion of Higgins, his servant, Borden decides to take a stroll in Central Park and smell the roses ( actually it is the budding Maple trees). In the park he meets Mary Grey (Ginger Rogers), one of the millions of the unemployed. Having only an apple for dinner, Borden invites Mary to celebrate his birthday by going to an expensive nightclub for dinner. At the club, Borden spots his wife dining with her boyfriend. Borden and Mary party into the night.

The next morning, recuperating from his hangover, Timothy is as shocked, at first, as is the rest of his family to find out he invited Mary to stay the night in a guest room at the mansion. However, enjoying the shock to the system Mary’s presence has given to his family; Timothy hires her, unknown to the family.  Once embedded into the household, Timothy lets his family and everyone else draw their own conclusions on their relationship.

It’s all lightweight fluff handled with a deft touch by director Gregory La Cava and his cast. Walter Connelly is charmingly lovable and Ginger Rogers handles it all with a sardonic edgy touch that off sets the other cast members. The cast includes Tim Holt, who is rather dull and lacks any kind of chemistry with Rogers. Also on board are Franklin Pangborn as Higgins the butler, Verre Teasdale as the snooty, philandering Mrs. Borden and Kathryn Adams as the daughter who is in love with the family chauffeur, a socialist constantly complaining of being exploited by his capitalist employers. Look for Louis Calhern and Jack Carson in small minor roles.

With Hitler only a week or so away from invading Poland, “Fifth Avenue Girl” opened up at Radio City Music Hall in New York. It must have been a pleasant piece of enjoyable fluff for a public who at the time must have been on edge with the war growing day by day in Europe and fearing America’s eventual involvement.