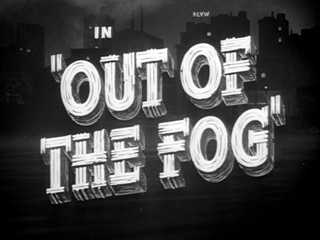 “Out of the Fog” is based on a 1939 play called “The Gentle People” by Irwin Shaw. The play ran for a respectable four and half months on Broadway and had one heck of a cast that included Franchot Tone, Lee J. Cobb, Sam Jaffe, Sylvia Sydney, Elia Kazan, Martin Ritt and Karl Malden. It was produced by the legendary Group Theater and directed by the visionary Harold Clurman.  The play was an anti-fascist parable (Shaw subtitled the play, A Brooklyn Fable) of the meek overcoming the arrogant and the powerful. In the play the two main characters were elderly gentle Jewish men, Jonah Goodman and Philip Anagnos, who are shaken down for five dollars a week in protection money by a smart aleck, stylishly dressed, wise ass gangster named Harold Goff (Tone). Goff also awakens the dreams and sexuality of Jonah’s bored daughter Stella (Sydney) who has hopes of leaving her meaningless existence for a more exciting life. When Goff learns the two fishermen have money saved to buy a boat, he demands they hand the savings over to him too. In order to rid themselves of Goff’s extortion and threats, the two fishermen lure him into their boat. Once they are out in the ocean they kill him and toss him overboard but not before taking his wallet filled with the money.

When Warner Brothers decided to make the film they were well aware some changes would have to be made. First they needed to softened the characters names or changed them completely so they would not be Jewish. Additionally, the Hays office would not allow the two men to not be punished for killing Goff, now played by John Garfield. Subsequently, in the film the two men cannot go through with shooting him. His death becomes an act of God when  he falls overboard and drowns since he cannot swim.

Still, Goff represents the powerful, a man “with rocks” in his coat, easily tossing a lit cigarette on to a wooden boat setting it on fire and watching it burn with childish joy. Goff is a full blown bully, pushing his way around, full of insolence; he has no problem putting the moves on Stella, played by Ida Lupino, the daughter of Jonah Goodwin (Thomas Mitchell), one of the fishermen he is terrorizing. Sensing Stella’s bored restlessness, Goff tells her everything she wants to hear and has been dreaming of, the fancy nightclubs, the parties, travel, a new and exciting life away from her dreary days in Brooklyn.  Stella is a good kid but is lured by temptation and excitement into betraying her father and her own beliefs.

Goff is the most evil character John Garfield has ever portrayed. He never shows any indications of regret or vulnerability. When Jonah calls the police on Goff, he is dragged into court, however the judge releases him when he presents a “contract” of a loan signed by the two fisherman (earlier he actually forced them to sign it). Goff seeks revenge by beating the older man with a rubber hose. He shows no compassion, just an immoral racketeer as he stands tall over the beaten Jonah telling him how he knows he can get away with this because people are weak and unwilling to fight back. The strong survive and the weak will perish.

This is a pretty dark film both figuratively and literally. Much of the film takes place at night and quite a bit is fog bound, both adding to the emptiness and claustrophobic feeling the film conveys.  James Wong Howe’s photography is exceptional, though the film does suffers somewhat from being bound by obvious studio sets. Ida Lupino’s performance is direct and upfront managing to convey both the loving daughter and the woman who desires a grander, wilder life than the one life has dealt her. The best performances though go to Thomas Mitchell and John Qualan as the two fishermen. The rest of the cast includes Eddie Albert, as Stella’s decent but dull boyfriend George, and both Leo and Bernard Gorcey in supporting roles.

“Out of the Fog”, despite its watering down from the play to meet the Hays Code restrictions, still makes no bones where it stands politically. The screenplay was by Shaw and Robert Rossen, and the film is nicely directed by Anatole Litvak.

This review is part of the John Garfield Blogathon being held by the They Don’t Make ‘Em Like They Use To Blog. Click here to check out some other great contributions to this tribute to Mr. Garfield.

This review originally appeared here in a slightly different version.