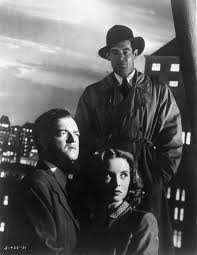 Mary Astor’s career was a long one going back to the early 1920’s. Over the years her career continued to grow until an infamous marital scandal broke in 1936 while she was making William Wyler’s “Dodsworth.”  During the court battle her husband Dr. Franklyn Thorpe threatened to submit Astor’s spicy, fully detailed, diary as evidence of her infidelities with George S. Kaufmann and other celebrities. Ultimately, the diary was never offered to the court. Astor’s career could have been in jeopardy, since as with most actors at the time, a morality clause was included as part of the contract. Fortunately, Sam Goldwyn refused to fire her and she continued in her role as Edith Cortwright, Huston’s lover in the film.  “Dodsworth” was a hit and Astor amazingly entered what could be considered her peak period with films like “The Prisoner of Zenda,” “The Hurricane,” “Midnight,” “Brigham Young” leading her into arguably her best year, 1941, with “The Maltese Falcon” and an Academy Award winning role as Best Supporting Actress for her role in “The Great Lie.”

After the successful year of 1941, along with its follow up with films like “Across the Pacific” and Preston Sturges, “The Palm Beach Story,” both in 1942, Mary Astor’s career hit another serious bump in the road. She made the mistake of signing a contract with MGM where they pretty much regulated her to playing “mother” roles in films like “Meet Me in St. Louis” and “Little Women.” In the 1944 musical, Astor, only 38 at the time, played the mother of Judy Garland who was 22. Suffice it to say, Astor was not happy. One of the few meatier roles MGM tossed Mary’s way came in 1948. 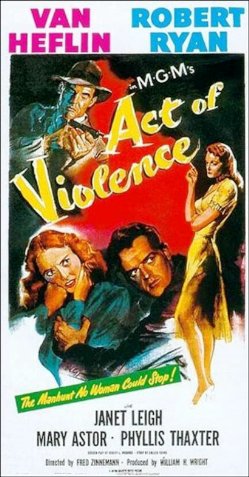 In the late 1940’s, director Fred Zinnemann made a loose trilogy of films depicting the effects of the post war aftermath. First up was “The Search” (1948) with Montgomery Clift, in his film debut, as an American soldier helping a young boy search for his mother. The last film in the trilogy was “The Men” (1950) with Marlon Brando, in his film debut, as a paralyzed G.I. attempting to adjust to his new post war life.  In between these two works came the noirish thriller,” Act of Violence.” Zinnemann himself had only made the leap from B movies to the “A” list four years earlier with “The Seventh Cross.” Most of his great films were still in the future.

Act of Violence” explores the choices one makes creating the sometimes thin line between being a hero and an informer. Frank Enley (Van Heflin) is a war hero, well maybe. He has a beautiful wife, a young fresh faced all American looking Janet Leigh, a young boy, a thriving business, a house in the California suburbs and is well respected in the business community. It seems like the perfect life. On weekends he goes on fishing trips with his neighbor while the wives are happily at home. Into this tranquil and serene world comes Joe Parkson (Robert Ryan), a limping, gun carrying, revenge seeking, former army buddy who is dead set on killing Frank. Parkson is sinister looking, seething with hate. Joe cannot forget or forgive what happened back when they were prisoners of war in a Nazi stalag camp. 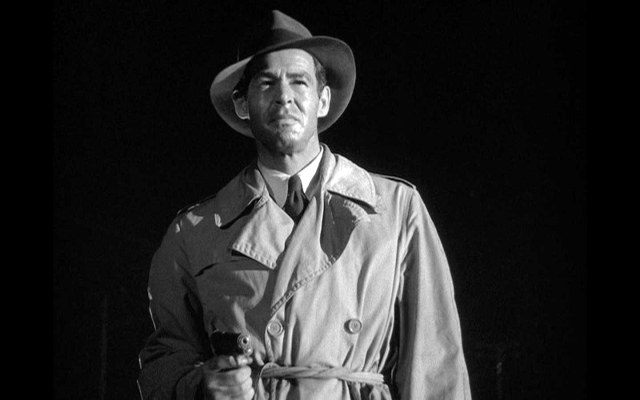 You see, Frank was the highest ranking prisoner in the German P.O.W. camp. He and Joe were also good friends until Joe and a group of other P.O.W.’s planned an escape via a supposed secret tunnel. Frank pleaded with Joe not to do it, telling him the Germans knew about the tunnel, making the plan too dangerous. They would never make it and would all be killed.  He tries to persuade the others not to go on with the planned escape. They don’t or won’t listen. Frank decides to go to the camp’s commander, telling them about the escape plan, extracting a promise from him; they will go easy on the escapees. On the night of the escape, the Nazi’s go back on their word and massacre the escaping prisoners; all except for Joe who manages to survive, avoiding the same fate by playing dead. His bum leg, a lasting memory of Frank’s treasonous act. The Germans treat Frank as a hero, giving him special treatment, plenty of good food while his remaining fellow prisoners are left starving and ill treated. 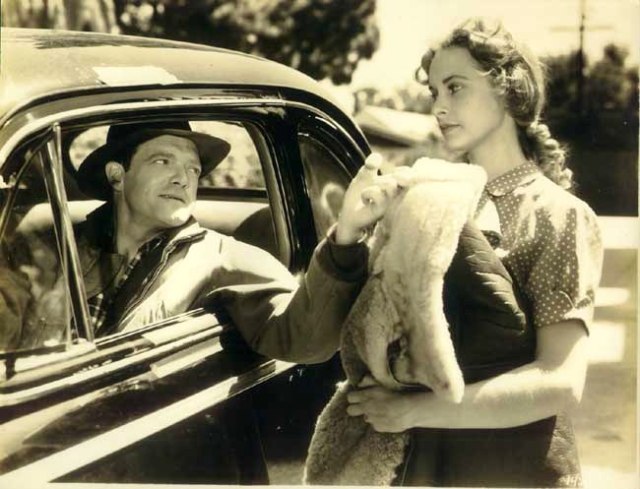 Frank returns home to a life of family, success and tranquility while Joe’s life has taken another road entirely, one filled with hatred and revenge. It’s eating him up. He’s got a girl, Ann (Phyllis Thaxter) who loves him and knows that he has a kind side. She does her best, continually pleading with Joe to forget about the past telling him to let’s just go home back east. But Joe cannot forget, he cannot forgive, he’s filled with rage which will only find release by killing Frank.

Frank goes on the run attempting to hide from Joe but Joe keeps tracking him down. Then one night in a drunken stupor, Frank connects with an over the hill tramp named Pat (Mary Astor) and a shady punk named Johnny (Berry Kroeger) who squeezes some dough from the hung over Frank as payment for Johnny to bump off Joe. The next morning Frank realizes what he agreed too and heads out the find the place Johnny has duped Joe into showing up, thinking Frank will be there, unaware of Johnny’s own plan to kill him. The climax comes in the final scenes with Frank’s redemption, costing him his life, but saving Joe’s. 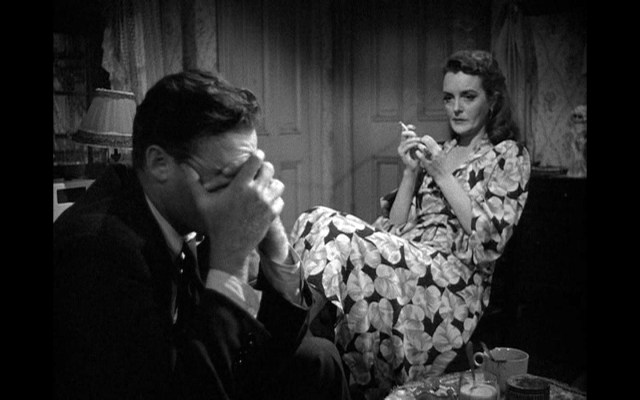 Director Fred Zinnemann and screenwriter Robert L. Richards weave a story filled with complex and moral issues of right, wrong, guilt and betrayal. Frank survived and has done well since the war ended with both family and career. Still, it has taken its toll on him; so much so, he is no longer sure why he informed. Wasn’t he just trying to save his men in a fool hearted attempt, trusting the Nazi’s to do the right thing, or did  he really betray his own men, sacrifice lives to extract favors for himself and damning his fellow prisoners to hell.

Based on a story by Collier Young, at one time Ida Lupino’s husband and business partner, “Act of Violence,” though set in the suburbs of a small California community, is a darkly lit shadowy filled film where light and shadows are eerily dangerous and menacing, contributing nicely to the ominous atmosphere. This is all thanks to cinematographer Robert Surtees whose works include, “The Bad and the Beautiful,” “The Collector,” “The Graduate” and “The Last Picture Show.” 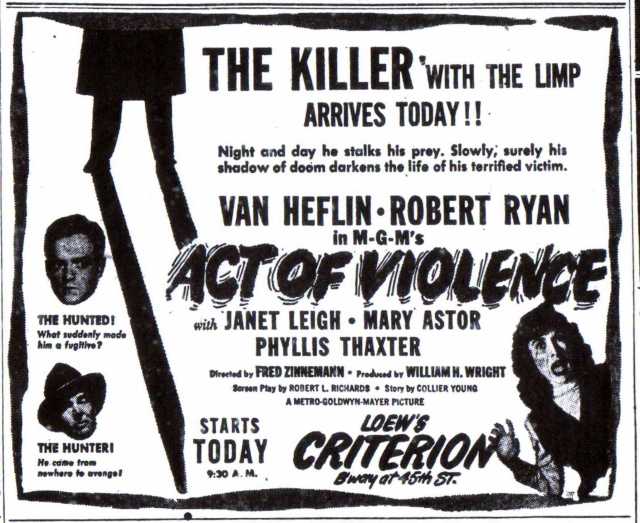 The script is complex. The two main characters are fully realized. No one is all good or all bad. Frank’s motive for informing always remains uncertain. It’s easy to say, “The guy squealed and was a traitor” but how sure are we of his original motive? We don’t know, and at this point in his life, years after the war, he is no longer sure why he did it. Whatever his reason, his actions changed the lives of many though the prisoners involved in the escape were mostly doomed either way. Then again, we are never sure the Nazi’s knew about the escape plans until Frank told them.

Robert Ryan is never anything but perfect as the revenge seeking ex-soldier. After all, who plays disgruntled better than Ryan? If you need an actor with a chip on his shoulder, Robert Ryan is your man. Van Heflin is Mr. Nice Guy, hiding his dark secrets from the world, that is, from everyone but Ryan. Conflicted, trying to hold on to his life, Van Heflin gives a strong sensitive portrayal of a man whose life is quickly spiraling out of control. A young, still dark blonde haired, Janet Leigh is Van Heflin’s sweet wife, a role with not much meat on it. A few years later Leigh would appear in another noir classic, Orson Welles “Touch of Evil.” Phyllis Thaxter handles her role as Ryan’s love interest with a sense of loving desperation.

My two favorite performances in the film though are reserved for Berry Kroeger and Mary Astor. Kroeger is a perfectly slimy lowlife willing to kill for cash. Kroeger is not well known but has contributed to such films as “Gun Crazy,” Cry of the City” and “The Dark Past” as well as many, many TV shows. Mary Astor who only a few years earlier played the devilish Brigid O’Shaughnessy in John Huston’s masterpiece, “The Maltese Falcon” gave what turned out to be one of her last significant roles, as Pat, a prostitute who has seen better days. Pat, is a bit frumpy, a rough around the edges broad who knows her best days are behind her and like Johnny is looking to soak Frank for a few bucks. It’s a terrific desperate performance.

This  is a slightly revised version of my original take on this excellent film noir as part the Mary Astor Blogathon hosted by Dorian  Tenore-Bartilucci at Tales of the Easily Distracted and Ruth Kozma Kerr at Silver Screenings. Please visit their sites for plenty of more takes on Mary Astor’s films and careers.

31 comments on “Act of Violence Revisited” 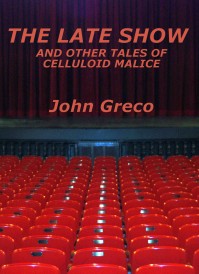