Photography and filmmaking are brothers, or sisters, under the skin. Cinema would not exist without the birth of still photography. As a photographer, and someone whose has been drawn to celluloid dreams all his life, I thought I’d list a few of my favorite films that have characters who are photographers in significant roles. All six films are available on DVD.

Where else to start than with one of my top five favorite films. REAR WINDOW, directed by Alfred Hitchcock, stars James Stewart as a Life magazine photojournalist confined to a wheelchair after an accident during a photo shoot. With one of his legs in a cast, he spends most of his time looking out his window observing his neighbors until one day he comes to suspect one of them (Raymond Burr) has murdered his wife. Hitchcock not only gives us one of the greatest suspense/thrillers of all time, but exposes the essence of photography and a dark side of human nature…voyeurism.

Steve Buscemi is a low-life, small time paparazzi in this little know film, who takes in Toby, Michael Pitt of “Boardwalk Empire” and “The Dreamers,” a young homeless guy, who he lets share his apartment. In exchange he uses Toby as an unpaid assistant in his work; chasing and snapping photos of the latest wanna be, Entertainment Tonight celebrities. Innocently, Toby catches the eye of a famous pop singer and becomes a minor celebrity in his own right much to the discern of Buscemi’s parasite paparazzi. Originally shown at the Sundance Film Festival, directed by independent filmmaker Tom DeCillo, “Delirious” reflects the bottom feeder side of the photo taking, celebrity stalking industry.

Based on a true story, James Wood is a photojournalist reporting the events of a military dictatorship in Latin America in the 1980’s. The film was given a quick release and died at the box-office when it first came out in 1986. Later that same year, Stone released “Platoon” and due to its success “Salvador” was given a second chance at the box office. Since then, it has come to be considered one of Stone’s most underrated films.  “Salvador”gives us a hands on look at the world of photojournalism during wartime. Stone’s hand held camera, guerilla style filmmaking adds to the atmosphere. Three years earlier, another film called “Under Fire,” starring Nick Nolte as a wartime photojournalist, covered similar territory.

In the mid 1960’s Italian filmmaker Micheangelo Antonioni went to England and made his first English language film. He set the film in Swingin’ London, at the time, the center of what was cool and hip… Carnaby Street, The Beatles, Twiggy and Mini-skirts! The plot is about  a day in the life of Thomas (David Hemmings), a photographer who has lost his artistic soul. He spends his time doing fashion photography. He’s self centered and nasty toward his models. One day, in local park taking photographs, he comes to believe he has uncovered a murder. He begins to study his negatives. He makes large prints. He focuses in on one area of the print attempting to zero in on one particular spot. The prints are blown up larger and larger, the grain turning then into unrecognizable abstracts making Thomas question what he did or did not see. Made only  three years after the assassination of JFK, the film has sometime been compared the Zapruder film that has been studied closely frame by frame being blown up for what may or may not be there. Not a film for “The Fast and Furious” crowd.

Another small independent film and another that reflects the creepy side of photography. Robin Williams, in an unusual role, is Sy Parrish, a photographer, who works at a local one hour photo lab. Sy knows his customers through their photographs and becomes obsessed with Nina Yorkin (Connie Nielsen) and her young son who the lonely Sy comes to view as his family. Director Mark Romanek hits upon how viewing life through photos, like Sy does, (birthdays, vacations, holidays, etc.)  creates false facades of people dreams and lives. 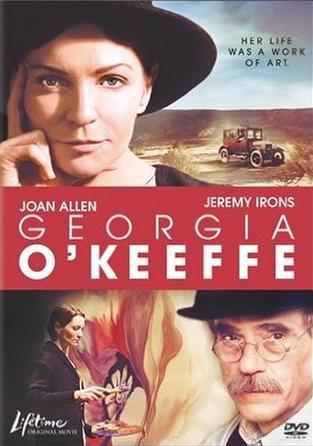 Georgia O’Keeffe – This is a TV movie made in 2009 starring Joan Allen as O’Keeffe and Jeremy Iron as photographer Alfred Stieglitz. The story focuses on both their love affair and their professional relationship, especially their eventual split which led to O’Keeffe’s blossoming as an artist. On the whole the film is unsatisfying but there are some nicely shot scenes of New Mexico and good performances by both Allen and Irons. You get a strong feel for the emotional hold Stieglitz had on O’Keeffe and how her own art would only flourished after they split.

There are plenty of other films with photographers as significant characters that you can look for. Here is a list of some in no particular order: