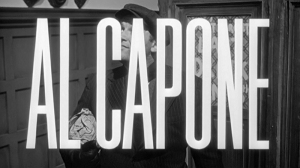 I first saw “Al Capone” during the summer of 1959 at the Staten Island Paramount Theater on Bay Street. I was pretty young at the time, probably around ten or eleven years old, but I was already in love with gangster movies! Only a year or so earlier I can remember seeing Don Siegel’s “Baby Face Nelson” with Mickey Rooney at the Loew’s Commodore (the theater some seven years or so later would become the Fillmore East). Despite my tender young age, I remember going to the movies that day to see “Baby Face Nelson” unaccompanied by an adult. I can’t imagine that happening today; then again, I can’t imagine my parents allowing me to go it alone even back then. That said, I do have this memory of going to the movies alone that day and it wasn’t the only time. There was at least one other time around that same period. The Three Stooges were touring movie theaters accompanying the release of their latest film (Have Rocket, Will Travel) and I know for sure my parents did not go with me to see them. They hated The Three Stooges!

Anyway, I have gotten a bit off track here, where was I… gangster films…oh yeah, Al Capone. Even at that young age Rod Steiger’s performance made a strong impression on me, enough to make me believe he was the real Al Capone, hell he even looked like the real deal, stocky, round face and that nasty scar. To this day, I still maintain Rod Steiger’s portrayal of Al Capone is the best, despite or in spite of so many other good performances, particularly from Robert DeNiro and Neville Brand, and a few bad overacted ones (Ben Gazarra and Jason Robards) that have come along since.

Directed blandly by Richard Wilson with a screenplay by Henry Wald and Harry F. Greenberg and bare bone production values, the film is a mix of fact and fiction. From the moment Steiger enters the barroom at the beginning of the film, having just arrived in Chicago from Brooklyn, to become Johnny Torrio’s (Nehemiah Peroff) body guard, he takes full command in a bravado performance. Sure Steiger is a bit of a ham, but Capone has always been portrayed as an over the top brutish, violent, media seeking lout. 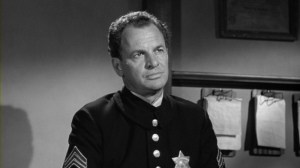 The film is laid out in a semi-documentary style with a voice over by James Gregory who portrays Schaefler, an honest cop who dedicates himself to getting Big Al. Capone, you might say, is a typical American success story, a young guy who starts out at the bottom of the corporate ladder, in this case the corporation is the underworld. With a specialized talent, ambition and a bit of luck he makes his way to the top. 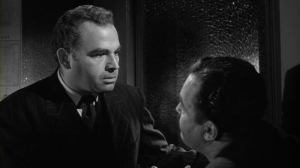 Capone comes to Chicago to join his old friend Johnny Torrio as his personal body guard (this is where the film begins though the real Capone already left a body or two bleeding in the streets of Brooklyn). Big Al quickly climbs his way up the ladder of success, generally over the dead bodies of anyone who gets in his way. He had a fondness for wearing sharp expensive clothing and eventually worked out of a corporate like office, feeling bigger and more important than any stooge Chicago politician down in City Hall. His illusions of grandeur never left him, even in prison, after his conviction on tax evasion, fellow prisoners who hated the big guy, brutally beat him up while he is screaming out “I’m Al Capone!, I’m Al Capone!”  The film actually plays down the Feds role in putting Capone behind bars. While he is convicted in a federal courtroom, it comes across as if Schaefler was the driving force behind the investigation.  For a more accurate look at how the Feds got Capone, take a look at the 1949 film directed by Joseph H. Lewis, “The Undercover Man.” The names have been fictionalized but this film was based on an article by Federal agent Frank Wilson whose investigation nailed Capone for the tax evasion charges.

After Capone hooks up with his old friend Johnny Torrio, who runs the rackets on the South Side of Chicago for his uncle Big Jim Colosimo (Joe De Santis), Al’s ambition is exposed quickly as he is soon urging Torrio to rid them of his Uncle, an old fashion “Moustache Pete” who is not in favor of forming an alliance with the North Side Irish gang led by Dion O’Banion. Torrio reluctantly agrees to the hit on his Uncle which is quickly implemented by Al and two of his best men. An uneasy alliance is formed between the Torrio/Capone mob and the O’Bannion clan. Not surprisingly, the peace does not last long and soon the two sides are killing each other off. O’Bannion is shot dead in his flower shop and a retaliatory attempt is made on Torrio’s life that scares him off. He soon decides to retire leaving the entire organization to Big Al. 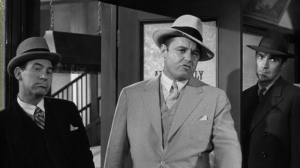 With prohibition the law of the land, Al builds up a criminal empire of illegal booze, gambling and prostitution. He controls the politicians in City Hall and runs a $100 million dollar empire from offices right in downtown Chicago. The hammer of the law comes down when both local and feds confiscate his records and get Alphonso on income tax evasion resulting in a sentence of eleven years at a federal prison…Alcatraz. The narrator states Capone served seven years before being released, ravaged and dying from an incurable disease. What he doesn’t say is that the disease is syphilis which he came into contact with years ago as a kid.

As I mentioned, the film blends together fact and fiction. The St. Valentine’s Day Massacre, arranged to rid Capone of his nemeses Bugs Moran is portrayed fairly accurately while the character of the newspaper reporter Mack Keely, the always interesting and dependable, Martin Balsam, an associate and liaison between Capone and the law is a fictionalized version of real life Chicago Tribune reporter Jack Lingle, who like the fictional Keely, was gunned down in Chicago’s LaSalle Street subway tunnel. It was the killing of Lingle that led to a public outcry and the beginning of Fed involvement in going after Capone.  On the flip side is the purely fictional love story between Capone and Maureen Flannery (Fay Spain), the widow of one of his early victims.

“Al Capone” is a low budget affair, with unconvincing sets and some badly directed scenes (check out the film ending prison scene). Released by Allied Artist around the same time a two-part TV episode of the Westinghouse Desilu Playhouse, called “The Untouchables” (directed by Phil Karlson) appeared tracing the escapades of the incorruptible Elliott Ness and his merry men as they tracked down Scarface. This show led to the TV series of the same name where Robert Stack’s Ness would soon go after just about every known gangster across the U.S.A. before the series ended. The two-part Desilu shows were a huge succeed and quickly were re-edited and released  in theaters  under the title, “The Scarface Mob.” Neville Brand played Capone once again in the series two part episode, “The Big Train.,” Once again, those two episodes were pasted  together , re-titled  “The Alcatraz Express”  and  released in theaters. Brand would also reprise his role as Capone  one more time  in the 1961 film, “The George Raft Story.”

The movies have had a love affair with the most famous of all gangsters going back to the silent days (Underworld, The Racket), but it was with the birth of sound that Capone clones began showing up all over the screen. In the 1930’s,  there was “Doorway to Hell,” where Lew Ayres’ Louie Ricarno was at least partially based on the Big Guy. In “Little Caesar,” Edward G. Robinson played Rico Bandello, a Capone stand-in and most blatantly Capone’s career was the basis for the Howard Hawks classic, “Scarface.” Plenty of other Capone clones followed including “Lady Scarface” (1941), and “The Gangster” (1947).  Jason Robards Jr. starred as Capone in Roger Corman’s 1967 film, “The St.Valentine’s Day Massacre,” Steve Carver’s “Capone” with Ben Gazzara, Brian DePalma’s “The Untouchables” with a baseball bat wielding Robert DeNiro, Anthony LaPagia played Capone in “Road  to Perdition.” His one scene was deleted from the film but is available now as an extra on DVD. Most recently a young Capone (Stephen Graham) appears  in the HBO series, “Boardwalk Empire.”

List of movies about Al Capone or with character inspired by Scarface.

Frank Nitti: The Enforcer  (1988)  Michael Switzer (Made for TV Movie)

Cicero (2014)   This movie is in development. Tom Hardy is scheduled to played Capone . David Yates will direct.

I am sure this list is incomplete so feel free to add others.

This review is my second contribution to the  TCM Summer Under the Stars blogathon.