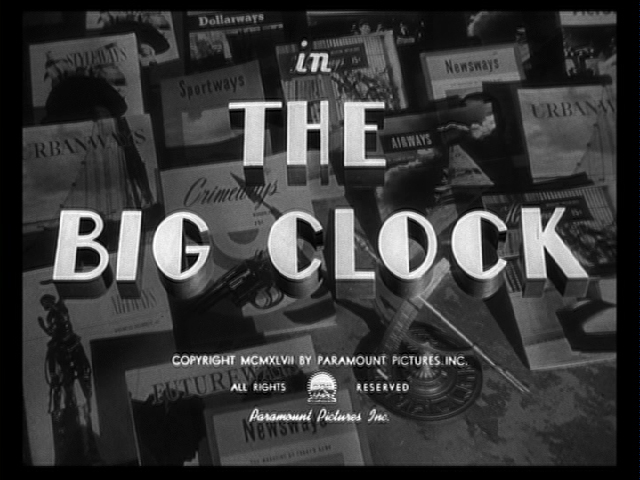 John Farrow’s  “The Big Clock” is a taut thriller with a tightly wound  clock ticking away as its protagonist  becomes more and more isolated and desperate after he has been indirectly set up to take the fall for the murder of his tyrannical boss’ lover. The film is based on a novel by Kenneth Fearing with a screenplay by Jonathan Latimer. Adding nicely to the tension is John Seitz’s impressive cinematography. The theme of greed, the cut throat behavior and heartlessness that exists in the corporate world, makes this film relevant more today than ever.

George Stroud (Ray Milland) has been working for Janoth Publications for seven years now. He is the editor of ‘Crimeways’ magazine. We first meet Stroud, as he attempts to avoid being caught by the police and others in the office building of the publishing firm where he works. He’s on the run, for what reason at this point we are not sure. He’s hides behind the ‘big clock,’ the centerpiece in the office building’s lobby, as well as publishing czar Earl Janoth’s (Charles Laughton) prize possession.

Like many crime films of the era, “The Big Clock” is told in flashback. We learn Stroud’s marriage is facing a crisis. Because of his job, in their seven years of marriage, the couple have yet to have a honeymoon vacation. George finally agrees he will take the time off immediately and they will go on their long-delayed honeymoon. He promises  his wife, Georgette (Maureen O’Sullivan), they will meet at the train station that evening. However, the big bossman, Janoth, an egomaniac tyrant with an annoying habit of twirling his mustache, has other ideas. He wants Stroud to stay at work and continue investigating a hot new story that will dramatically increase circulation. Stroud however sticks to his guns and quits that afternoon not succumbing to Janoth’s threats he will have him blackballed in the business if he leaves.

After work, but before meeting Georgette that night at the train depot, Stroud stops at a local watering hole where he meets hot looking blonde, Pauline Delos (Rita Johnson), who unknown to Stroud is Janoth’s mistress. They drink a bit too much and head back to Pauline’s apartment where she proposes, no, not that they make love, but a blackmail scheme against Janoth whom they both have come to hate. However, they are interrupted when Janoth unexpectedly arrives, but not before Stroud leaves using the stairwell just as Janoth appears exiting the elevator. The big bad boss sees a male figure just starting down the stairwell but does not recognize who it is.

Meanwhile, Georgette, tired of waiting at the train station for George, boards and leaves town without him.

Janoth, suspects the man he saw heading down the stairwell was leaving Pauline’s apartment and jealously demands to know who it was. An argument ensues and Janoth kills Pauline using an object Stroud and Pauline acquired earlier in the evening.

Later, Janoth confides to his close trusted aid, Steve Hagen (George Macready), about the murder he just committed and together they devise a scheme to search for the ‘real’ killer. Janoth lures Stroud back from his honeymoon, to investigate the murder. But the clues begins to mount focusing more and more on Stroud as the killer, leaving him to investigate on his own the tracking down of the real murderer.

Charles Laughton’s quirky mannerisms highlight a superbly mannered performance. In addition, there are notable turns by Rita Johnson as Janoth’s mistress and Elsa Lanchester in a small, though delightful, supporting role as an eccentric artist. Also in the cast are Harry Morgan, billed as Henry Morgan, as Janoth’s silent but deadly henchman.

In doing some research, I have found this film to be continually labeled as a film noir, but I don’t believe it is, at best, it’s borderline. It does not contain the cynicism, the gloom, the femme fatale, noirs are noted for having.  There is some nice noirish style lighting at times, however I still think it is much closer in style to a Hitchcockian thriller filled with shady characters, and most of all, nerve wracking suspense.

On a side note, the film has the unusual situation of having two real life married couples working on the film. Charles Laughton and Elsa Lanchester were husband and wife as were director John Farrow and Maureen O’Sullivan. “The Big Clock” opened in New York at the Paramount theater on Broadway on April 21st, 1948. It is also the basis for the 1987 Kevin Costner film, “No Way Out.”