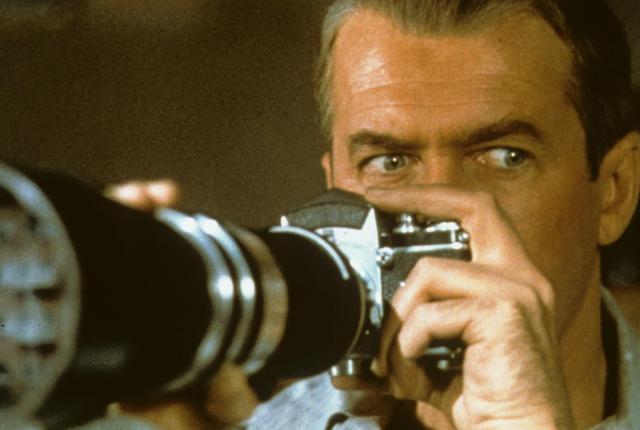 The previous time James Stewart and Alfred Hitchcock worked together was on Rope; an experimental piece for Hitch that was considered a failure by most critics of the time. Stewart himself was not happy with the picture, or with the role, which he felt was not right for him. Additionally, there was the fact Rope was not a financial box office success. Some cities even requested cuts before it was to be shown. In Chicago it was banned outright. This was most likely because the storyline was a bit too close to the real life Loeb-Leopold case of the 1920’s.  Subsequently, when Hitchcock called about Rear Window, Stewart was hesitant to accept, especially after hearing that, like Rope, the film would take place mostly on one set. Furthermore, he would be confined to a wheelchair for the entire film.

Promises from Hitchcock ensured Stewart Rear Window will not include the same long ten minute takes he endured in Rope. That along with financial incentives, and noting Grace Kelly would be his co-star, all helped ease Stewart’s concerns. That said, Mrs. Stewart, Gloria, was not that happy. As the wife of a movie star, Gloria was well aware her husband would sometimes be involved in on screen love scenes and accepted that it came with the territory. But Grace Kelly was already on her way to building a reputation for sleeping with her co-stars as she apparently did with Ray Milland during the making of Dial M for Murder. Milland was just one in a list of leading men she slept with that included William Holden, Clark Gable, Frank Sinatra and Gary Cooper, among others.  What made the Milland affair particularly troublesome for Gloria was that she was close friends with Mrs. Milland! While no affair occurred, Jimmy was an all American boy and did, like all of Kelly’s co-stars, find her charming and alluring. 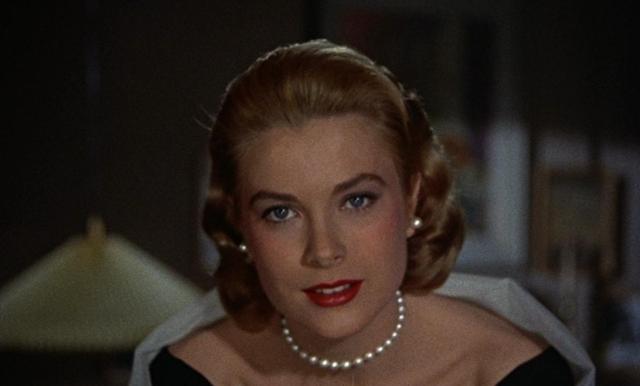 It should come as no surprise to anyone that as a photographer Jeffries likes to look. Hey, that’s what photographers do. They look, they frame, they snap! Annie Leibovitz once said, “One doesn’t stop seeing. One doesn’t stop framing. It doesn’t turn off and on. It’s on all the time.”  As a photographer myself, I agree, you are always looking, framing and in your head you hear the click of a shutter over and over. Trapped in a wheelchair due to a leg injury incurred when he got too close to the action at an auto raceway, L. B. Jefferies has spent the last weeks overlooking the courtyard, via his large bay window, which essentially acts as a one man multi-plex to the world outside where he can jump from one screen (apartment) to another, one story to another. There are a wide variety of stories going on; the out of work songwriter, an affectionate newlywed couple, a lonely woman Jeffries has dubbed Miss Lonelyhearts, a young dancer he calls Miss Torso. There are also a few married couples. Ond with a dog, another who sleep out on the fire escape and lastly Lars Thorwald (Raymond Burr) and his sick wife.

Jeffries girlfriend, Lisa Freemont (Grace Kelly), a high fashion model, is pushing him to settle down and get married, a concept Jeffries reacts to as if it were allergenic. We first meet Lisa about 16 minutes into the film in an extreme close up, her elegantly beautiful face leaning forward kissing Jefferies.  She is not only beautiful but stylish and sophisticated, a rare classic that has every man in the audience thinking he must be crazy not to want to marry her. Jeffries begins to focus on the Thorwald’s when he notices Mrs. Thorwald, who was always visible through her bedroom window, seems to have disappeared. Additionally, Mr. Thorwald, a salesman by trade, has began to go out at odd hours of the night with his sample case in hand. Jeffries suspects murder. However Lisa and Stella (Thelma Ritter), his visiting nurse, do not believe his assertions but they soon become convinced something foul is going on.

For James Stewart, this role was part an image change that began earlier in the decade when he started to work with Anthony Mann in a series of westerns (The Naked Spur, Bend of the River, The Man From Laramie) that would continue throughout the decade.  The All-American Jimmy Stewart had a dark side! Mr. Nice Guy, Mr. Straight Lace of It’s a Wonderful Life, Mr. Smith Goes to Washington, Vivacious Lady and so many others had a streak that walked on the wild side. As Jeffries, Stewart is anti-marriage, voyeuristic and obstinate, yet he manages to hold on the audience as a sympathetic character you want to cheer on.

Rear Window was based on a short story by Cornell Woolrich, writing as William Irish, called, It Had to be Murder, which first was published in ‘Dime Detective’ magazine back in 1942. Hitchcock hired John Michael Hayes to flesh out the short story into a screenplay. It was the first of four times they would work together. Hayes is responsible, at Hitchcock’s request, for adding Kelly’s fashion model character.  Stewart’s character was loosely based on war photographer, Robert Capa. The film opened on August 1st, 1954 at the Rivoli Theater on Broadway in New York City. Coincidently, one week later another film opened just a few blocks further down on Broadway with the similar theme of voyeurism at the less auspicious Globe Theater, Richard Quine’s Pushover, which officially introduced future Hitchcock blonde, Kim Novak (1) and future James Stewart co-star in Vertigo and Bell Book and Candle, both in 1958, to screen audiences.

(1)  Novak’s credit for Pushover is her real introduction to audiences despite a previously uncredited bit part in The French Line.

This article is part of the CLASSIC FILM AND TV CAFE Blogathon now showing through April 17th.