Part 6 of this continuing series contains about seven films that, if I ranked this series numerically,  would land in the top twenty easily. These films have influenced me, taught me and have remained over the years pure orgasmic celluloid pleasures.

Invasion of the Body Snatchers

An allegory on the infiltration of communism in America? A metaphor for people turning a blind eye to the McCarthyism hysteria that was sweeping the country in the early 1950’s? An attack on the potential dangers of conformity and the stamping out of individuality? Don Siegel’s 1956 gem of a film, Invasion of the Body Snatchers, has been said to “really be about” any and all of these themes since its debut now more than fifty years ago. Siegel, who should know, never mentions any of this kind of subtext in his autobiography, A Siegel Film, so one can assume, all the reading into this classic SF film is just that, critics and filmgoers reading their own thoughts and ideas into a work of pop art. After all, isn’t personal interpretation one of the elements and joys of enjoying art?

Invasion of the Body Snatchers is an expertly made science fiction thriller that slowly builds in tension and never lets up. Filled with perfectly composed cinematography, a pulsating music score, by Carmen Dragon, and top notch acting performances from Kevin McCarthy and the lovely Dana Wynters, in a gallant battle to save the human race from dehumanizing pods.

Invasion of the Body Snatchers cautions us on the problem of being complacent with our lives; falling asleep is a danger, we are vulnerable, one loses touch with the world, and pods can quickly take us over. This fear is as relevant today as it was more than fifty years ago, maybe even more so, when the film was made, as pod like ideologues and followers swarm into the political mainstream.

The audience was hooked right from the beginning. I saw Jaws for the first time during that hot summer of 1976, Word had spread quickly that it was the film to see. Like everyone else in the neighborhood Brooklyn theater, I was on the edge of my seat  throughout. It changed the way films were distributed, arguably not for the better. I have watch Jaws at least once a year, and as corny as it may sound, it’s usually on or around the fourth of July weekend. It just seems appropriate.

The Killers is a hard-boiled film noir starring an unknown 32-year Burt Lancaster making his film debut and a contract player from MGM, of limited talent, with little in her filmography at that point in time to prove she would amount to anything. Her name was Ava Gardner.  It’s an intricate and visually stunning film with its black blacks and pure white whites. A classic noir filled with fatalistic moods, smokey rooms, booze and death. 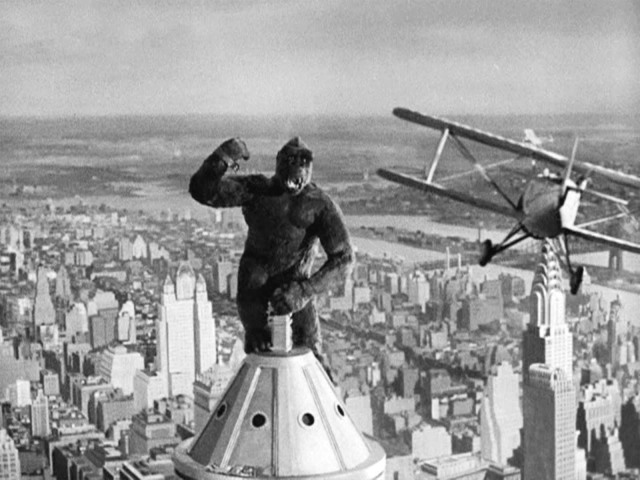 If you lived in the New York City area  around the mid to late 1950’s up until the mid 60’s, and you were a movie fan, you were familiar with Million Dollar Movie on WOR, channel 9. Weekly, they ran the same film twice nightly and three times on weekends. The station showed a lot of RKO films (according to IMDB the station was a subsidiary of RKO and got to show those film at no cost). King Kong was a mainstay and so was I. My mother use to look at me as I watched  on a Saturday afternoon and say, “how many times are you going to watch that? Why” I had no answer that would make sense to her, so I just sort of looked at her and shrugged. She shook her head and walked away leaving me in my fantasy world.

Nothing seems to make sense in Kiss Me Deadly, even the opening credits roll backwards. That said, Robert Aldrich screen adaptation of Mickey Spillane’s novel is a pulp fiction classic. A cinematic mix where noir meets the nuclear age.  Ralph Meeker’s Mike Hammer may just be the dumbest P.I. to ever grace the screen, still director Robert Aldrich gives us one of the great film noirs of all time. It’s violent, sexy and nasty. The film’s ending is one of those, to use an antiquated 1960’s term, mind blowing. Meeker is perfect as the thuggish Mike Hammer, a bedroom dick, who is not beyond letting his secretary/ lover, Velda (Maxine Cooper) have sex with someone just to gain information on the case.

One of the most intelligent, romantic, funny screwball comedies to grace the screen. Preston Sturges opened the door for other screenwriters, like Billy Wilder, who were frustrated with directors messing with their work, wanted to direct their own scripts. Henry Fonda manages to fall, trip, slide, and slip so many times that he seems to spend much of the film on the ground. What may be my favorite scene is when Barbara Stanwyck practically seduces Fonda by continually twirling his hair while he is reclining on the floor getting more and more flustered. One of the most seductive and sexy scenes ever filmed. I was breaking out in a cold sweat just watching!

Alfred Hitchcock’s last British film is a wonderful mix of a paranoid mystery, wicked humor and suspense. Hitch builds up the tension using many of his trademark traits ( tight editing, shooting in claustrophobic quarters) and themes (mistaken identity and trains). The film takes place in a fictional country yet deals with the very real threat of Hitler’s Germany.

A masterpiece of small town life in a dying town during the 1950’s. Peter Bogdanovich paints an inspiring emotional take on an America losing its focus. Made in the early 1970’s, when the Vietnam war was still raging, the sub-text is not hard to miss. There are few films packed with as many amazing performances as there are here, among them Jeff Bridges, Eileen Brennen, Ben Johnson, Cloris Leachman and Timothy Bottoms.

As an adolescent, acceptance into your peer group is always an undeniable desire, rejection from the group could scar you for life. Few films broach this topic as compelling and intelligently as Last Summer. The film is the story of three middle class teenagers who spend a summer on Fire Island with their parents, though the parents are never seen. Sandy (Barbara Hershey), a beautiful dark longhaired girl is highly intelligent and while she expresses a sexual confidence her actual experience is limited. The two boys, Peter (Richard Thomas) and Dan (Bruce Davison) are sexually less sure of themselves; they talk a lot about getting laid, would Sandy be willing, when and if they should make a move. The three form a strong close knit friendship. Into their tight circle comes Rhoda (Catherine Burns), a short plump lonely girl who practically forces her way into their company. She really does not fit in, but they let her hang out with them, mostly because they take spiteful pleasure in taunting and mocking her. The film reveals the callousness, the lack of a moral center many young people have yet to develop. Rhoda is tolerated, but never really accepted.

I was introduced to this film as a kid when WNEW-TV (channel 5) in New York showed movies all afternoon on Sundays. They were mostly Warner Brothers films and The Maltese Falcon was a mainstay. Bogart’s Sam Spade was a tough, cynical, P.I. with a code that some would consider immoral, others individualistic. He worked and walked a thin line with the law,  following his own code of ethics, which meant  he did not always get along the police. Besides Bogart, the film has a perfect cast filling out a group of shady characters from Mary Astor, Sydney Greenstreet, Peter Lorre to Elisa Cook Jr., Barton, McLane, Gladys George and Ward Bond.  John Huston’s maiden voyage into direction is the prototypical film noir. It’s filled with darkly lit cinematography, brooding cynicism, and a bleak conclusion.  Roger Ebert called The Maltese Falcon one of the greatest films of all-time. I am not going to argue.