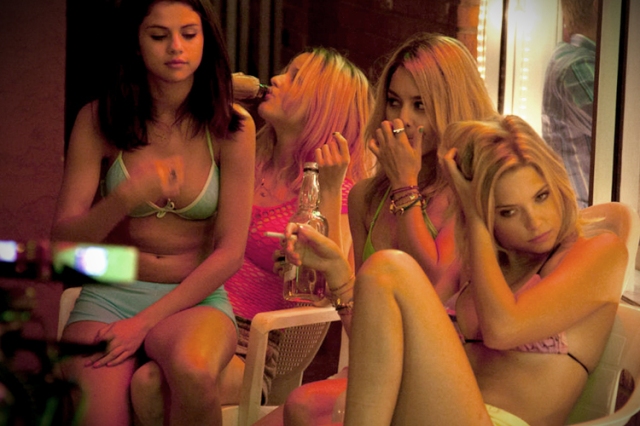 It’s spring break time and thousands of college age kids have or will be making their way down to Florida’s beaches to have a swinging party in the sun. The Sunbaked State depends on tourism. They love to see young folks partying all night long, spending lots of dough, helping to boost the local economy. So a few years ago when it was announced that a new film, called Spring Breakers, would be shooting in the Tampa Bay area, city officials and others were elated. The film sounded like a fun in the sun Florida sunshine treat. The kind both the tourism industry and politicians like, showing off the Sunshine State at its exuberant beachy best. They soon would find out Spring Breakers was not going to exactly be the second coming of Elvis in Girl Happy.

The film does start off as a sort of modern day version of Where the Boys Are, but it soon turns into a dark tale of youth alienation and violence, all under the “heavenly” sunny Floridian landscape. Like the earlier 1960’s youth market classic, its starts off with a group of college girlfriends (Selena Gomez, Vanessa Hudgens, Ashley Benson, Rachel Korine) wanting to go down to Florida’s sunny beaches, in this case to St. Petersburg, for spring break. Only they have no money. But they are determined and resourceful…in a nasty way. They rob a restaurant. Before you know it, they are down south partying on the beach with thousands of other slim, sexy beautiful looking people; drinking, snorting, smoking, humping and generally doing all the things young folks do without adults around. They soon get caught in a police raid and spend a couple of days in jail until they are bailed out by a sleazy looking James Franco, who goes by the name of “Alien,” a local rap singer/drug dealer. 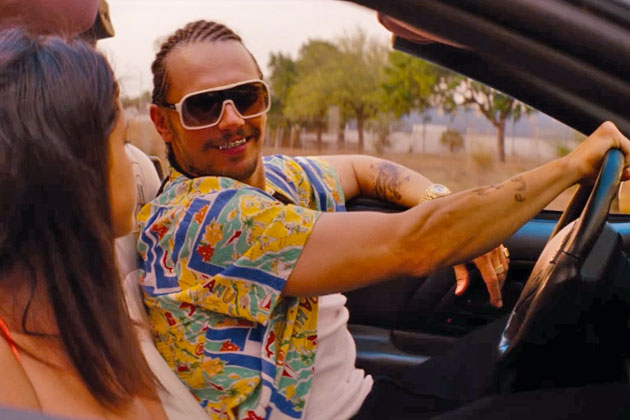 It’s at this point things really begin to take a twist in an unexpected direction. One of the four girls, Faith, (Selena Gomez), who is the good girl in the group, wants to return home at this point. She’s more religious than the other girls and is creeped out by Franco’s character. As she boards the bus back north, the three girls left behind are about to embark on a wild ride. They not only lost Faith, the only character with any common sense, but their moral faith as well. With Alien, the girls slide deeper into a world of drugs, sex and violence. The film twists and slides toward a dark, disturbing view of fun in the sun. The tourist industry and politicos must have had a few sleepless nights after watching this film.

As you might guess, despite the title and the young beautiful barely clad, and sometime not so clad, girls Spring Breakers is not for kids. Director, Harmony Korine has more things on his mind than just beach party time. Korine wants to dig deeper into an exploration of today’s youth culture; the recklessness, the boredom, the debauchery of spring break as well as the false dreams that Florida is some kind of land of heavenly paradise. 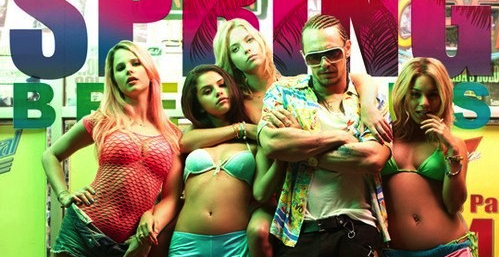 Does the director success? Well, both yes and no. There are way too many gratuitous shots of girls with their bikini tops off; guys, pouring soda or booze all over their bodies. The film could have been done with a reduced amount of what seemed unnecessary skin shots. Korine does get his more serious points across, however, they are constantly muted, or distracted, by all the young good looking sexy skin.

While Selena Gomez is the best known of the girls, she has the least interesting role and, as mentioned, is gone from the film by halftime. Acting honors go to James Franco who is almost unrecognizable with his metal plated teeth and hairdo. He is the scariest character in the film and also gives the most energized performance. At times, you don’t know whether to laugh at him or fear him. Probably a bit of both.

Spring Breakers is a hybrid. A sort of Where the Boys Are meets Natural Born Killers.