More than seventy years after its release, Sabotage remains relevant today. In fact, it is arguably more relevant today, considering the world we live in, than in 1936 when it was first released. Based on Joseph Conrad’s short novel, The Secret Agent, the plot focuses on Karl Verloc (Oscar Homolka), a foreigner from an unnamed country. Verloc owns a local cinema in London and is a member of a terrorist group set on crippling London. His wife, (Sylvia Sidney) is completely unaware of her husband’s underground activities. Living with the couple, in an apartment above the cinema, is Mrs. Verloc’s much younger brother, Stevie (Desmond Tester), whose death in the film sparks its most famous, and most infamous, sequence.

Hitchcock sets up the opening moments with a nice sequence of shots. First a dictionary page explaining the definition of the word sabotage as the opening credits appear. This is followed by a series of shots as the city of London loses its electric power. Next we see two investigators identify the cause…sabotage. Finally, a quick cut to a close up of Karl Verloc (Oscar Homolka) our saboteur.

The blackout does not have the desired effect Verloc’s group wanted. The newspaper reported Londoner’s mostly enjoyed the happenstance and laughed it off. Verloc soon meets with his contact at a local Aquarium where he is told, the next time, people will not laugh. He’s instructed to meet with a bomb maker whose front, a pet store, sells birds. The birds are an important plot point in the film as we will see. For Hitchcock, birds would become a recurring motif appearing in many of his films (Psycho, To Catch a Thief and The Birds).

The adaptation of Conrad’s short novel was written by Hitchcock regular, Charles Bennett (The 39 Steps, The Man Who Knew Too Much, and Foreign Correspondent) with dialogue assistance from Ian Hay and Helen Simpson. The title change from the source novel was necessary since Hitchcock’s previous film was called Secret Agent. That film was based on a Somerset Maugham novel called Ashenden.

In the essential Hitchcock/Truffaut interview book, the French director/critic says he found the movie disappointing. He states, “The thing that’s basically wrong with the whole picture is the characterization of the detective.” Hitchcock admits, John Loder, who portrays Scotland Yard detective Ted Spencer, was not his first choice. He wanted Robert Donat. Unfortunately, the actor was unavailable. There seems to be two explanations put forth by biographers. One is Alexander Korda, who had Donat under contract, refused to release him. Hitchcock biographer Patrick McGilligan notes that Donat suffered from chronic asthma and “when he came down with acute bronchitis,” Hitchcock had to settle for Loder. Whatever the reason, as the Scotland Yard investigator, Loder, who works undercover at a fruit and vegetable store next to the movie theater, is a pale and uninteresting actor. As he investigates the possibility of whether Mrs. Verloc has any knowledge of her husband’s subversive activities, he begins to develop a crush on the married lady. The charismatic Robert Donat would have definitely added a smoother Cary Grant kind of charm to the detective than the characterless John Loder could pull off.

Hitchcock himself had another problem he thought was wrong with the film. He felt he made a major mistake in showing young Stevie carrying the bomb around London and eventually being blown up. After endearing the boy to the viewers, and then to have him killed in such a violent way, Hitchcock felt he may have alienated the audience. However, let’s consider the horrific idea of a terrorist blowing up a London bus filled with, not just the boy, but many other innocent people. In 1936, this was considered pretty shocking and probably far-fetched. In today’s environment we all know this idea is much too close to reality for comfort. We just have to think back to the 2005 series of coordinated public transportation bombings in London, including a double-decker bus. We have also over the last few years read of young kids being used to carry bombs in various terrorist attacks.

In the movie, the fact we have come to like the boy only makes it all that much more uncomfortable and tragic.  The film remains much stronger emotionally today and more relevant because of these powerful scenes. This sequence is also a primer for Hitchcock’s theory of suspense versus surprise. (1)

A second memorable sequence follows the young boy’s death after Mr. Verloc confesses to his wife he is responsible for the boy’s death, though https://twentyfourframes.wordpress.com/wp-admin/media-new.phphe then goes on to blame Scotland Yard. Mrs. Verloc, in shock, wanders into the theater where the audience is enjoying the Disney Silly Symphony cartoon, Who Killed Cock Robin? She soon finds herself giggling and laughing along with the audience. When Cupid kills Cock Robin with his arrow, the cartoon’s catchphrase “Who’s killed Cock Robin?” begins. This shakes Mrs. Verloc back to reality. Overcome with grief, we find Mrs. Verloc back in the apartment, in an almost robotic state slicing up the evening dinner. A carving knife is most prominent in the shots. Hitchcock cuts back and forth between the knife, Mrs. Verloc and Mr. Verloc.  Verloc soon realizes what his wife is contemplating. He gets up, approaches her and attempts to take the knife, but she grabs it first, stabbing him…or does he walk into the knife killing himself? The way the scene is shot, Hitchcock seems to leave us with this bit of ambivalence.

Sylvia Sidney was a popular American actress at the time Sabotage was made. She was working with prominent directors like Fritz Lang whom with she just finished making the anti-lynch mob film, Fury. At first, both Sidney and Hitchcock looked forward to collaborating with each other, but soon after production began, they quickly came to dislike one another. As an actress, the stage trained Sidney was use to long dramatic takes, and did not understand the cinema techniques Hitchcock employed: the close up, the short quick takes of the carving knife, no dialogue, and how it would all make sense once put together in the editing room. It was only after she watched the completed film she understood how all the small pieces of celluloid would come together. 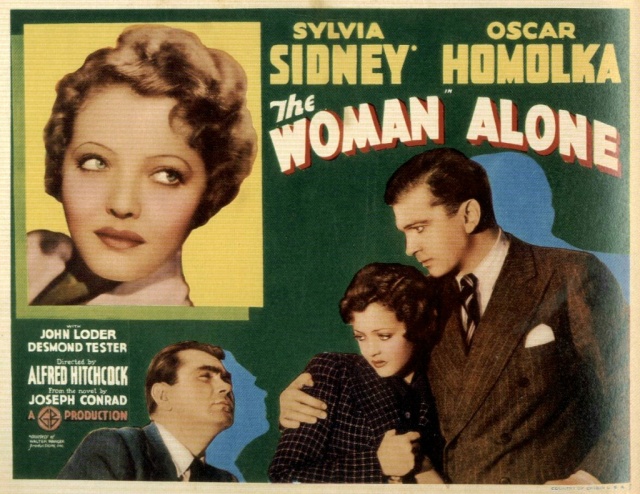 The British critics were somewhat harsh in their reviews, knocking Hitchcock for being “callous” in killing the young boy.  In America, where Hitchcock was still regulated to the art house circuit, the film was released under the title, The Woman Alone. Critics in the U.S. were more charitable and considered it a fine follow up to The 39 Steps and The Man Who Knew Too Much.  Sabotage remains one of Hitchcock’s darkest works right up there in its bleakness with The Wrong Man, Vertigo and Psycho.  It’s one his finest films from his British period.

(1) Hitchcock’s theory – “We are now having a very innocent little chat. Let’s suppose that there is a bomb underneath this table between us. Nothing happens, and then all of a sudden, “Boom!” There is an explosion. The public is surprised, but prior to this surprise, it has seen an absolutely ordinary scene, of no special consequence. Now, let us take a suspense situation. The bomb is underneath the table and the public knows it, probably because they have seen the anarchist put it there. The public is aware the bomb is going to explode at one o’clock and there is a clock in the decor. The public can see that it is a quarter to one. In these conditions, the same innocuous conversation becomes fascinating because the public is participating in the scene. The audience is longing to warn the characters on the screen: “You shouldn’t be talking about such trivial matters. There is a bomb beneath you and it is about to explode!”

In the first case we have given the public fifteen seconds of surprise at the moment of the explosion. In the second we have provided them with fifteen minutes of suspense. The conclusion is that whenever possible, the public must be informed. Except when the surprise is a twist, that is, when the unexpected ending is, in itself, the highlight of the story.”  From Hitchcock/Truffaut Interview Book. (Page 73)

This article is part of the CMBA “Fabulous Films of the 30’s” Blogathon that runs through May 1st. You can read more entries in this series by clicking on this link…http://clamba.blogspot.com/2015/04/cmba-spring-blogathon-fabulous-films-of.html