Richard Avedon was one of the best known and most influential portrait and fashion photographers of his day. He changed the concept of what was fashion photography and how it was presented. He has remains an artistic hero to many, right to this day. Born in 1923, in New York City, Avedon’s parents were both in the fashion business. His father, Jacob Avedon, owned and ran Avedon’s Fifth Avenue, a clothing store. With his family background, young Richard took an early interest in fashion and began photographing outfits from his father’s store. When he was twelve years old, Richard became a member of the Camera Club at the Young Men’s Hebrew Association.

After graduating from DeWitt Clinton High School and attending one year at Columbia University, Avedon, in 1942, joined the Merchant Marines where, with his training in photography, he was assigned as a Photographer’s Mate Second Class. His job mainly consisted of photographing sailors for identification card photos.

After serving two years in the Merchant Marines, Avedon went back to school attending the New School for Social Research studying photography. His instructor was Alexey Brodovitch with whom he became friends. Brodovitch was the already legendary art director for Harper’s Bazaar, a position he held from 1934 to 1958. Others students of Brodovitch included Art Kane, Diane Arbus, Hiro, Lisette Model and Gary Winogrand. Thanks to Brodovitch, Richard Avedon secured a job at Harper’s photographing New York City life. After a few years, Avedon got the chance to shoot fashion for the magazine working mostly in Paris. In 1945, he served as Harper’s Staff Photographer, a position he held for 20 years.

Avedon’s fashion photography created new avenues as to what fashion photography was and where it was going. He infused his work with fantasy, a stark realism and an individual personality. Avedon’s reach was so wide he was even known to people who were completely unaware, totally unhip to fashion, photography and art. At the time of his 1978 retrospective exhibit of his work at MOMA,  Avedon was so well known, his face was featured on the cover of Newsweek magazine.

While Avedon made his living mainly through his fashion and advertising work, his real love was for portraiture. Stark, white backgrounds, keeping his famous subjects relaxed and moving, he managed to catch them baring their imperfections as well as a piece of their souls. His portraits included artists from Buster Keaton to Pablo Picasso, socialites like Gloria Vanderbilt and politicians from John F. Kennedy to Fidel Castro. 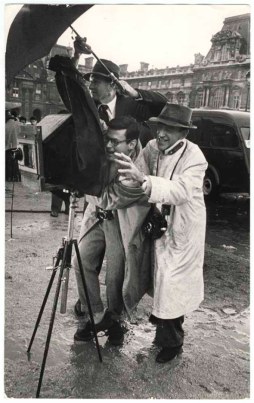 In Funny Face, Fred Astaire’s character, Dick Avery, is based on Richard Avedon. The script was written by Leonard Gershe who based it on an unproduced musical he wrote, back in 1951 called, Wedding Days, with words and music by Ogden Nash and Vernon Duke. He eventually sold the rights to MGM. Gershe was a friend of Richard Avedon’s since their days together in the Merchant Marines, and he based his story on the real life romance of photographer Avedon and model Dorcas Marie Nowell. Just like in the movie, Avedon discovers his muse working in Greenwich Village. However, unlike in the movie she was not a bookstore clerk, but worked in a bank. He turned Dorcas into a top model of the day who became known as “Doe.”

At MGM, Gershe got together with producer and composer Roger Edens (Babes in Arms, Panama Hattie, Good News, Take Me Out to the Ball Game, On the Town). They dumped the Ogden Nash/Vernon Duke score and decided to substitute it  with the songs of the Gershwin Brothers along with adding a few additional songs of their own.

The film’s title came from the 1927 musical that Fred Astaire starred in with his then wife Adele. The music was by George and Ira Gershwin. However, by the 1950’s, the title, and the title song, were all that remained from the stage show. By the mid-1950’s MGM, though still making musicals, was not always convinced everyone was going to be an automatic success. The studio became a bit more choosey. Paramount had recently signed the 57 year old Astaire to a two picture contract. Astaire wanted to work with Hepburn and she wanted to work with Astaire. Negotiations between studios ensued including the availability of using the Gershwin songs which by this time were owned by Warner Brothers. A deal was struck with Warmers, selling the rights to the Gershwin songs back to MGM. Stanley Donen came on board to direct. With Warner Brothers now out of the picture, MGM agreed to receive a percentage of the films’ profits; in turn for which Paramount could use the Gershwin songs. It turned out to be a good deal for MGM. The film was a go.

Dick Avery is a top notch fashion photographer for Quality magazine, a fictional version of Harper’s Bazaar. He’s not happy with his current model, a high pitched, squeaky voiced and not too bright, but beautiful type (played by Dovima, a top fashion model of the day). While on a location shoot at a Greenwich Village bookstore, Avery and the magazine’s editor Maggie Prescott (Kay Thompson) meet Jo Stockton, (Hepburn), a bohemian village type bookseller more interested in philosophical discussions than the airhead world of fashion. From here the film evolves into a sort of Pygmalion/My Fair Lady tale where Avery transforms our “beatnik” damsel into a reluctant chic fashion model. She only agreed to go along so she will meet her French existential hero, Professor Emile Flostre (Michel Auclair), a tongue-in-cheek take off on Jean-Paul Sartre. The final film was a charming musical, who as Audrey Hepburn biographer Donald Spoto wrote is, “both a satire and an endorsement of high fashion; a spoof of the coffee house ‘beatnik’ intellectualism popular in the 1950’s; and a tribute to the genius of Richard Avedon.”

Unlike in My Fair Lady, Audrey Hepburn did her own singing in Funny Face. She handles the songs well enough with her rather thin though serviceable voice. Prior to filming there was two months of singing and dancing rehearsals. Not in the same class as Ginger Rogers, Hepburn who studied ballet, did well with the dance sequences including a solo number. Astaire and Donen made sure they did not give Ms. Hepburn anything that would have been too difficult to handle.

With Astaire as her leading man, once again, Hepburn had an on screen romance with an older man. Astaire was 57 at the time. Prior to this film there was Henry Fonda in War and Peace and Humphrey Bogart in Sabrina. Not too far in the future, Billy Wilder would once again team her up with an older man, Gary Cooper, in Love in the Afternoon. Was there some kind of message in this? Was Hepburn such a waif? Did she possess such a little girl image that she was sexless, and therefore the older men were more fatherly figures instead of romantic or sexual? Or was it just Hollywood’s typical way of pairing older men and younger women? If Funny Face has a weak point, it’s the love scenes between Astaire and Hepburn. There is a lack of electricity in their romance. Hepburn is fine, she’s beautiful, classy and sexy. The lack of chemistry is more due to Astaire than Hepburn. Astaire has admitted to never liking love scenes or on screen kissing scenes. He felt uncomfortable with them, and I think this uncomfortableness transfers to the screen. Unlike fellow dancer/actor, Gene Kelly, Astaire always came across as asexual no matter who he partner was.

With Stanley Donen directing and Fred Astaire dancing, one can easily mistake the film to be from the MGM stables. It has that kind of glossy feel. Funny Face was mostly shot in Paris and the filmmakers made the best of it. We get exquisite views, thanks to the steady cinematography of Ray June, of the Louvre, the Eiffel Tower and the Champs-Elysees along with other famous landmarks from the City of Light. With this backdrop and Gershwin classics like Let’s Kiss and Make Up, How Long Has This Been Going On and ‘S Wonderful how could Avery and Jo not fall in love. As previously mentioned, the Gershwin songs were not the only tunes in the film. Music from Gershe’s original unproduced Wedding Days were used. Gershe and his co-composer Roger Edens contributions included Think Pink! Bonjour, Paris! and Oh, How to be Lovely.

Richard Avedon got screen credit as a Special Visual Consultant and for Main Title Backgrounds. Avedon photographs are used in the film; mostly in the opening credits and during the Think Pink! musical number. There is also the photograph of Audrey Hepburn we see Astaire pull out of the developer in the darkroom scene. This photograph was used as the cover for the album’s soundtrack LP.

Richard Avedon’s other function as a visual consultant was to ensure, as Diana Maychick quotes Avedon in Audrey Hepburn: An Intimate Portrait, “that the movie was not “painfully silly” from a photographer’s point of view…and it was not.”  Avedon goes on, “I made sure most of the things that happened could have at least really happened. But I found the whole piece charming, so light and refreshing, that I didn’t have too many objections. How could you, when you got to see Audrey Hepburn every day.”

For those interested in finding out more about Richard Avedon, there is a PBS documentary that provides a comprehensive overview of the photographer called, Richard Avedon: Darkness and Light. It was part of the American Masters series. The DVD is out of print, but you may be able to find a copy at your local library or you can watch it on line at the you tube link below…

Puttin’ on the Ritz: Fred Astaire and the Fine Art of Panache – Peter J. Levinson