The Tall T is a superbly bleak western from Budd Boetticher. Boasting a screenplay by Burt Kennedy, based on a short story by Elmore Leonard, it stars Randolph Scott as rancher Pat Brennan. After losing his horse in a bet with a fellow rancher, Brennan is now walking his way back to his place. Along the trial comes a stagecoach. Hired by sleazy accountant, Willard Mims (John Hubbard), the coach is making a special run carrying Mims and his newly married bride Doretta (Maureen O’Sullivan), the plain Jane daughter  of a rich coal mine owner. The couple are on their honeymoon. Seeing Brennan along the road, the coach’s driver stops and picks him up despite Willard’s complaints that he hired the coach for his personal use. 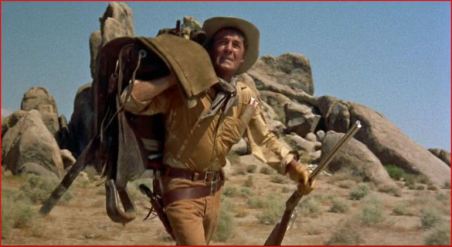 A short time later, at a nearby coach station they run into a trio of murderous outlaws headed up by Richard Boone’s Frank Usher. Usher and his two sub-human partners, Chink (Henry Silva) and Billy Jack (Skip Homier) have already killed the stationmaster and his young boy, dumping their bodies into the nearby well. When the killers find out the newly married woman is the daughter of a rich father, they take all three hostage, holding them, particularly  the daughter, for ransom.The husband, quickly reveals himself to be a cowardly slime ball willing to use his newly married bride as a bargaining chip in order to save his own skin.

Brennan quickly realizes he’s expendable to the killers. It’s only his conversations with Usher, who yearns for a life more like Brennan’s than his own life of crime and hanging out with his merciless lowlife cronies, that is keeping him alive.. The difference though between Brennan and Usher though is clear. Brennan has a moral center. He’s a man who has been working and building his own ranch and life  honestly. Usher dreams of wanting the same life but he wants it the easy way…steal it. The difference is ethics. Brennan though, as we expect, is just waiting. Waiting for his opportunity to free himself and Doretta. 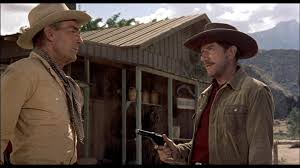 Richard Boone has to run a close second to Lee Marvin as one of the great western heavies of the 1950’s. In this film as well as in works like Way of the Gaucho, Man Without a Star and in the 1960’s Hombre, Boone portrayal of treacherous and sadistic outlaws are superbly convincingly mean to the bone.

Randolph Scott portrays his typical stoic, granite faced loner. Whether he’s a bounty hunter (Ride Lonesome) or a husband determined to get his wife back from the Comanche’s (Comanche Station) or a former sheriff hell bent to revenge his wife’s death (Seven Men From Now), Scott’s characters are loners, obsessed, driven and even sometimes just downright mean themselves (Decision at Sundown). All of these films, directed by Budd Boetticher, and a few others have gained in stature with the passage of time. Psychological pieces that rank up there with the mature westerns of Anthony Mann and Delmar Daves securing the 1950’s as a golden era for westerns.

Boetticher’s films are deceivingly simple. They are more character studies than action films. In this film it’s the relationship between Brennan and Usher that gives the film its depth. The two men are alike in many ways; both are solitary men, a bit on the lonely side. They both have a lot of the same skills and abilities as well as the same hopes and dreams, though their ways to achieve their dreams differ. There’s a feeling of respect for each other. Still, both also realize one is going to have to kill the other before this it is all over.

The secondary relationship in the film is that between Brennan and Doretta and is a more standard one with O’Sullivan’s plain Jane starting off as rather dull and naive individual who felt lucky to have found a man willing to have married her. She quickly discovers her mistake, and even the more obvious, falls for our hero.