Juano Hernandez’s early days are not clearly defined. Various sources claim he was born in either 1896, 1898 or 1900. A consensus seems to be for the 1896 date…but who knows. All agree he died in 1970 and that he was born in Puerto Rico to a Puerto Rican father and a mother of Brazilian decent. Hernandez was orphaned pretty early on and soon was living with an aunt in Brazil. It was while living in Brazil that Hernandez got his first taste of performing. The young boy joined a group of street kids and began performing in public: singing, dancing and acrobatics. Juano eventually joined a carnival and worked his way around Latin America and the Caribbean, eventually making his way into the United States. During this period, he taught himself to read, write and learned various languages. A multitude of jobs followed from working in the circus to becoming a professional boxer.

In New York, Hernandez began to find jobs in the entertainment world. He worked as a radio script writer, a singer and eventually began doing some theater work. In 1931, he made his Broadway debut in a short lived musical called Fast and Furious. Between 1931 and 1948 Hernandez appeared in seven Broadway plays including the shows, Strange Fruit and Set My People Free. His early screen roles included a silent film called, The Life of General Villa (1914) and three films (The Girl from Chicago, Lying Lips and The Notorious Elinor Lee) directed by black filmmaker pioneer, Oscar Micheaux. 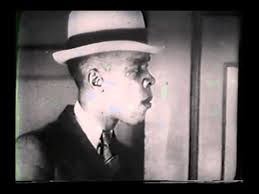 Oscar Micheaux’s “The Girl From Chicago.”

In 1949, Hernandez made his first Hollywood film, the brilliant Intruder in the Dust. It was directed by Clarence Brown (Anna Christie, A Free Soul, National Velvet, The Yearling). The film was released in 1949, the same year as two other racially themed works, Pinky and Home of the Brave. Based on William Faulkner’s novel of the same name, Intruder in the Dust is a potent film on racism that, now more than sixty years later, still contains the power to sock you hard right in the pit of your gut. The place is rural Mississippi where a financially well off black farmer, Lucas Beauchamp (Juano Hernandez), is falsely accused of killing a white man. The town is immediately ready to lynch Lucas without the help, or need, of a judge and jury. Coming to his aid are a young teenage boy (Claude Jarman Jr.), the boy’s uncle, a lawyer (David Brian), and a local elderly woman (Elizabeth Patterson), all whom, along with the sheriff, seem like the only decent, read that non-racist, white people in town. Granted, the uncle/lawyer is not entirely comfortable at first defending a black man but, he does the right thing.

Most of the town folks in the crowd scenes were all locals. They have that dusty, hard lived, unforgiving look that you cannot get out of central casting. Intruder in the Dust does not sugar coat the discrimination. The white town people are lowly educated and easily ready for revenge. They want to see another black hanging from a tree. Lucas Beauchamp, unlike most of the whites, is a dignified and proud man. Unlike all the other black folks in town, Lucas does not bow down to the white people. He expects to be treated as an equal. Many of the town’s white people find this completely brazen and even insulting. Juano Hernandez performance, as Lucas, captures the independent nature of a man who raised and built himself up to a good life, and livelihood, from nothing.

The film has a couple of other recognizable actors. The previously mentioned, Elizabeth Patterson, best known from her days on I Love Lucy as Lucy’s elderly neighbor (Mrs. Trumbull), willing to help prove Lucas Beauchamp’s innocence. You may also recognize character actor Porter Hall (Double Indemnity, Miracle on 34th Street, Make Way for Tomorrow) as the murdered man’s one armed father. The young boy, Claude Jarman Jr. is best known for playing Jody in the 1946 version of The Yearling. 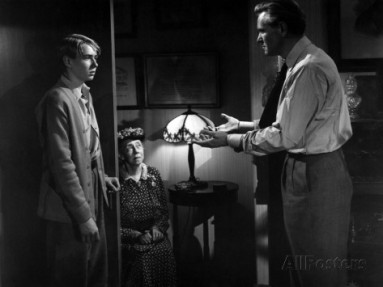 Clarence Brown, as director and producer, was the prime mover in getting this film made. Via his recommendation, and with the help of Dory Schary (L.B. Mayer did not want to make it), MGM purchased the screen rights to Faulkner’s novel before its publication. Born in Massachusetts, Brown moved to Tennessee with his parents when he was just eleven years old. Growing up in the South gave the director a personal and unique point of view on Southern culture that was missing in many other films of the period. Brown always considered it his best film.

The movie was filmed in Oxford, Mississippi, Faulkner’s hometown, which certainly adds to the rural feel of the film. It also added to some problems. Though Juano Hernandez is of Puerto Rican and Brazilian decent, he is dark skinned and was playing a black, as he did in many of his films. Hernandez was intelligent and eloquent, more so than most of the white population of Oxford. Still, he faced the same situations and problems as any black person including not being allowed to stay in the same hotel as the rest of the film crew.

Upon its release, the film did play in the South. However, in their advertising, MGM played down the racial aspects of the film and emphasized the story as more of a murder mystery. The Loew’s Grand in Atlanta even listing young Tennessee born Claude Jarman Jr. on the marquee as the film’s star. Juano Hernandez received a Golden Globe nomination for his superb performance and the film made The New York Times Ten Best List that year.

Intruder in the Dust was Hernandez first mainstream Hollywood film. The following year he appeared in Young Man with a Horn playing a jazz musician opposite Kirk Douglas. He also appeared in Jacques Tourneur’s Star in my Crown with Joel McCrea and The Breaking Point (Michael Curtiz) opposite John Garfield. In 1950, Hernandez found a second career. The self-educated actor was presented with an Honorary Degree from the University of San Juan, and soon after was offered a position as a Professor in Drama and English. Thus the Puerto Rican native returned to his birth place to live and teach. When Hollywood called, as they continued to do, Hernandez took off only if he thought he had a good role. In 1955, he made two films, Robert Aldrich’s Kiss Me, Deadly and more importantly, for Hernandez, Trial (Mark Robson) in which he played the dignified Judge Theodore Motley. He would take leave of his duties at the University, head off to Hollywood, film his latest work and then flee back to Puerto Rico and his professor position. Other films Hernandez appeared in included Sgt. Rutledge (John Ford), Two Loves (Charles Walters) and The Sins of Rachel Cade (Gordon Douglas). As the 1960’s came along, the older actor began making a lot of appearances in TV in shows like Johnny Staccato, Route 66, and The Defenders. His final feature film was They Call Me Mr. Tibbs! (Gordon Douglas)

One of Hernandez’s best roles during this period was in Sidney Lumet’s excellent film, The Pawnbroker. Hernandez’s role as Mr. Smith, a poor Harlem resident was small, but memorable. His scenes with Rod Steiger’s bitter Holocaust survivor are devastatingly brilliant. For the short time he is on screen, he just about steals the film from Steiger.

Juano Hernandez continued to work in Hollywood until his death in 1970.

This post is my contribution to the Hollywood Hispanic Heritage Blogathon hosted by Once Upon a Screen. Check out other great contributors by clicking on the link below.

19 comments on “Juano Hernandez and Intruder in the Dust”