Sam Fuller’s background as a newspaper reporter is always evident in his films visual style. They always jump off the screen like the morning headlines. Fuller’s 1957 western begins exactly in that same fashion sucking you in right from its opening shot. A buckboard with three men, Griff Bonnell (Barry Sullivan) and his two brothers, suddenly hear the sound of a thundering herd of horses. Before they know it they are surrounded by the film title’s forty guns, led by Barbara Stanwyck’s Jessica Drummond, all dressed in blackm riding a white stallion. One of Fuller’s visually unique shots puts the camera’s POV under the buckboard as the horses thundering hooves pound on by.

Shot in widescreen Cinemascope, the film has a stark feel to it, emotionally it’s as cold and hard edged as Fuller’s characters. They are harsh and in your face. With Fuller much of the thrill is in the visuals and he comes through here with flying colors. Within its 80 minute running time, Fuller has packed in a visual display of images including a few lengthy tracking shots, a romantic love scene between Gene Barry’s Wes Bonnell and local town girl Louvenia Spangler (Eve Brent) prophetically viewed from the inside barrel of a gun. Fuller also shot a tornado scene that is excellent, as is the final shootout with Stanwyck in the cross hairs.

Drummond with the help of her forty guns controls the Arizona territory. She has the sheriff (Dean Jagger) and judges in her pockets. That is until Griff Bonnell and his brothers arrive in town. Griff is a U.S. Marshall who knows the times are passing him by. Gunslingers will soon be a thing of the past and he just wants to retire. If this sounds familiar, think Wyatt Earp and his brothers. Jessica also has a hot headed kid brother, Brockie (John Erickson) whom she has been protecting from his recklessness all his life. That comes to an end in the film’s final scene when Griff catches up with him. Earlier in the film, Brockie shot and killed Wes Bonnell on his wedding day. Griff’s revenge is swift and deadly. In a final showdown, right in the middle of town, Griff’s comes for Brockie. The kid brother grabs Jessica, using his sister as a shield. He provokes Griff to go ahead and shoot. Griff keeps marching toward the gunslinger. Without any hesitation, he then shoots Jessica. She falls, slipping out of Brockie’s hold. Griff continues to shoot hitting Brockie multiple times. Sister and brother lie next to each other on the ground. Griff walks passed them. He tells a bystander, “Get a doctor, she’ll live.” He continues to walk on not missing a beat. Originally, Fuller in his script had Jessica shot and killed. However, the studio rejected the idea. Stanwyck could not die at the end. And so, in the final shot, we see Griff on a buckboard riding out of town alone. Suddenly we hear Jessica calling out to him, then running toward the buckboard. Presumably they live happily, if with the occasional acts of violence, together. 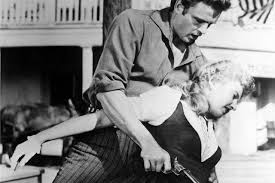 Forty Guns falls into a small category of westerns which includes Duel in the Sun, Johnny Guitar, The Violent Men and The Furies with strong women in power. The last two films both starred Stanwyck. In Forty Guns, Fuller fuses uncontrolled violence and sex. Guns are phallic symbols and kissing leads to bloody violence and even death. The symbolism continues when Jessica Drummond explains her childhood definition of a man. “Everything with two feet and a gun.” As Lee Server writes in Sam Fuller: Film is a Battleground, “facing Griff across the dining room table, she asks him, ‘your trademark…may I feel it?’ To which Griff replies, ‘Uh-uh, it might go off in your face.’

It’s not the first film where Fuller equates violence and sex. In his first directorial effort, I Shot Jesse James, Robert Ford, the dirty little coward, kills Jesse so he can collect a reward and marry his sweetheart, only to discover she does not love him. Fuller’s 1952 film, Park Row, a great film about the newspaper industry, has Gene Evans as Phineas Mitchell, a newspaper reporter fired for not following the rules. He and others soon start their own paper causing a tabloid war with Charity Hackett (Mary Welch), the publisher of Mitchell’s former paper. When Charity realizes the upstart newspaper is gaining in circulation, one night alone in Mitchell’s office, she proposes a merger. His response is to take her in his arms, kiss her roughly and then reject the offer. In Sam Fuller’s world,and as Pat Benatar once sang, love is a battlefield.

Sam Fuller has long been labeled a primitive, but I think it would be more appropriate to label him a true auteur. He not only wrote, produced and directed his films but in works like Forty Guns presents a unique vision, a radical reworking of genres formed by his own personal view. He forces the viewer to look from an idiosyncratic perspective. The film’s widescreen photography was shot by Joseph Biroc (Attack! The Garment Jungle, The Glass Wall) who has worked with other directors with unique visions like Robert Aldrich.

By the time Forty Guns was released, the film career of Barbara Stanwyck, who was fifty years old at the time, had seen better days. In fact, this film would be her last for about five years when she would return in Walk on the Wild Side. Stanwyck would spend most of her remaining career, and not unsuccessfully, in television most prominently in The Big Valley. That said, Stanywck’s Jessica Drummond is one of a handful of woman in westerns who ride tall in the saddle. She was a feminist long before the word and the movement even existed. She built up an empire with forty men under her command as well as being a strong mature self-assured woman willing to use her mind and body to get her way and not be ashamed.

This is my contribution to the Remembering Barbara Stanywck Blogathon. For more excellent contributions check out the link below.