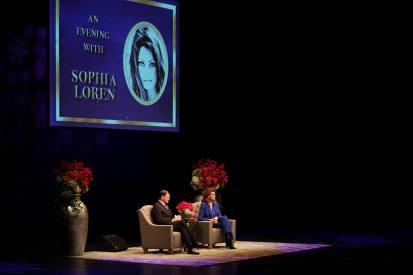 Recently, my wife and I had the pleasure of spending an evening with Sophia Loren. That is, we and about 1,500 other folks at Ruth Eckerd Hall in Clearwater. It was a Q&A and this was her last stop on a eleven city tour before she headed back home to Geneva. The 81 year old icon is still a beauty and extremely grateful for a life well spent. 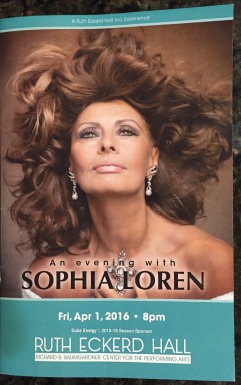 Ms. Loren shared stories about her growing up during World War II. Poor, mother and child were barely hanging on. Life would begin to turn around for the thin child who was known as “the stick” once American forces began to push the Germans out and take over the Italian countryside.

Moderated by Tampa Bay Times film critic, Steve Persall, Ms. Loren spent most of the evening talking about her career, her films, and her leading men. Her favorite leading man? Who else but good friend and co-star, the late Marcello Mastroianni. They were paired up in many films over the years including and The Miller’s Wife (their first), Marriage, Italian Style, Blood Feud,  Ready to Wear, A Special Day, Sunflowers and Yesterday, Today & Tomorrow among others.

The evening prompted me to take another look at the 1963 film, Yesterday, Today and Tomorrow. It is what is commonly known as an anthology film, generally consisting of anywhere from two to six short films, usually connected by some kind of similar theme and sometimes the same director.  Examples include, O’Henry’s Full House, L’Amore, Boccaccio ’70, New York Stories and Coffee and Cigarettes.

Though lighter in tone than De Sica’s earlier classic neo-realism films  (Bicycle Thieves, Shoeshine, Umberto D), Yesterday, Today and Tomorrow still reflects one of De Sica’s main themes…class distinction. Here though he does it with humor and a telling touch of life in 1960’s Italy. Along with De Sica and a group of writers, much of the appeal goes to the two leads who were at the peak years of their careers.

In the first segment (Adelina of Naples), Loren portrays a lower class woman who makes a living selling contraband items like cigarettes in the Naples black market. Always concerned about getting arrested, she discovers a loophole in the law where a pregnant woman cannot be sent to jail. All she needs to do is get her sleep weary husband to keep getting her pregnant.

In the second segment (Anna of Milan), arguably the weakest of the three, Marcello portrays a poor artist whose lover is a snobbish, selfish, rich woman who cares for nothing but money and sex. With her rich husband always out of town, she has plenty of time on her hands for amore.

The final segment (Mara of Rome) contains the most memorable scene in the film. Here we have Loren portraying a prostitute and Mastroianni a seminary student with thoughts of leaving the order. In the film’s most famous scene, Sophia does a striptease while Mastroianni sits curled up on bed howling and sweating as each piece of clothing is enticingly removed by his leading lady. The scene is both erotic and funny. It was one of the clips shown during the Q&A and Ms. Loren went on to explain how nervous she was at the time doing the scene. She never did a striptease before. Director De Sica told her not to worry, he would get someone to teach her. The teacher turned out to be the man who choreographed the ladies who danced at the Crazy Horse Saloon. After a few basic lessons she then had to shape those lessons into a routine that she could make her own for the film.[1] 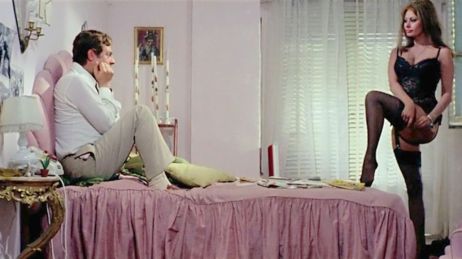 Sophia passed the test. The striptease is both revealing and not. Being the early 1960’s the striptease stops short of revealing too much. That said, Loren’s full curvy, voluptuous body and her slow enticing movements, removing each article of clothing slowly and sensuously are an erotic delight. This was especially true for a young teenage boy of about fourteen or fifteen seeing a striptease for the first time! Until I re-watched the film recently it was honestly the only part of the film I remembered. You need to consider the times. It was the early 1960’s. Nudity, was not as easily accessible as it is now. At this point in my life, if I ever seen had a woman nude, it may have been in Playboy or some similar type magazine that a friend somehow managed to confiscate a copy of. So seeing Sophia doing an even modified semi-striptease was memorable and probably a bit corrupting to a young teen with little experience. Hey, whom I kidding…with no experience! Yes, Sophia Loren corrupted me and to this day I thank her!

Watching the film again since that first time back in 1964 at the Walker Theater in Brooklyn was revelation. It holds up well. Mastroianni was a wonderful actor who could handle both dramatic and comedic roles with equal aplomb. The same can be said for Loren who won an Oscar just a few years earlier for her superb performance in De Sica’s Two Women.  Yesterday, Today and Tomorrow won the Oscar for Best Foreign Film.

In 1994, Robert Altman had Sophia and Marcello recreate the famous striptease scene with a humorous alternate ending. In Altman’s film, Marcello, after starting off howling and excited as Sophia does her striptease…falls asleep!

Meanwhile, back at the Q&A Sophia talked about her many leading men who included Cary Grant, Frank Sinatra, Peter Sellers, John Wayne, Richard Burton, Peter O’Toole, Clark Gable, Paul Newman and Marlon Brando. Grant and Loren became good friends and maybe even more. Most fell in love with her. Peter Sellers, when asked by his young daughter if he loved her, reportedly said, “Yes, but not as much as I love Sophia Loren.” She had that kind of effect.

Photo by Tracy May

It was Cary Grant who planted the seeds for her to do a Q&A tour. During his final years Grant toured the country doing Q&A’s and told Sophia she should consider doing the same thing. Fearing her English was not good enough, she put it out of her mind until this recent tour. Cary was also the one to first notify Sophia when she won the Oscar for Best Actress in 1960 for her amazing role in De Sica’s Two Women (she did not attend the ceremony). When moderator Steve Persall asked Sophia of her many films she made which was her favorite, she quickly responded Two Women.

De Sica and Carlo Ponti were the two men responsible for making Sophia a star. If Mastroianni was her most frequent and favorite co-star, De Sica was the director she worked with the most. Gold of Naples was their first film together when Sophia was still in her teens. Other films include Boccaccio ’70 (one episode) , The Voyage, The Condemned of Altona, Sunflower and Marriage, Italian Style.

When she talked about many of her co-stars, most were favorable except for Marlon Brando. Working together in Charlie Chaplin’s A Countess for Hong Kong, Brando apparently was always habitually late on the set, that is until Chaplin threatened to fire him.

At 81 years old Sophia Loren still looks radiant and beautiful.  So it was a bit shocking when she first walked out on stage being assisted all the way from backstage to her chair on stage by Persall. Most in the audience, including my wife and I, thought she must be somewhat disabled and  needs to use a cane to walk. We later found out that was not the situation. A day or two earlier while on the tour she sprained her ankle and only temporarily needed the support.

It was a fascinating and special evening. A a rare chance to see one of the true legends of cinema.

[1] Hotchner, A.E. Sophia: Living and Loving Her Own Story