Tab Hunter Confidential is an insightful and personal look at a man who despite the Hollywood system managed to find a path to inner peace and happiness. His honestly and sense of self come clearly through. The film is also an excellent look at the Hollywood system’s inner workings into the making of a star and the secrets that are buried. We learn how he was groomed for stardom as the clean cut, boy next door type. His face appeared on the cover of hundreds and hundreds of fan magazines. He dated beautiful starlets including Natalie Wood. He appeared in hit films and recorded number one charting records. Yet, Tab Hunter was not real.

He was born Arthur Kelm, the younger of two boys born to a divorced mother. After her divorce she took back her maiden name, Gelien, and changed her two boys names as well. As a child he was awkward and shy.  He also had a secret. A secret that way back in the 1950’s would have ruined his rising career. He was gay.

Christened with the name Tab Hunter by his first Hollywood agent, Henry Wilson, well known in the film industry for grooming young good looking men and turning them in stars.  He gave them names like Troy, Chad, Rory, Rock and Tab. Rock was Rock Hudson who became Wilson’s biggest star and the agent would do anything to protect him. That as we would find out included exposing Hunter’s sexuality to Confidential magazine, along with Rory Calhoun’s jail time, in exchange for keeping Hudson’s sexual preferences out of their pages. Wilson was gay himself and in the industry it was assumed if you were managed by Wilson you were gay. This wasn’t necessarily true, but most of his would be stars were in the beefcake category gay or straight.

Hunter made his film debut with a minor role in Joseph Losey’s The Lawless. He also appeared opposite Robert Mitchum as his kid brother in Track of the Cat. However, he hit it big with Battle Cry in 1955. Other hit films follow like They Came to Cordora, Gunmen’s Walk and Damn Yankees! There were also two moneymakers (The Girl He Left Behind and The Burning Hills) in which he co-starred with Natalie Wood. The couple were a hit both on screen and off as well as with the fan magazines of the day. The studio (Warner Brothers) arranged plenty of publicity photos of Tab and Natalie going out to dinner, dancing and so on. As Hunter says though, later at night after the photographers left, Natalie would go off with Dennis Hopper and Tab would head off with his latest boyfriend at the time. This was not an uncommon occurrence in the Hollywood community and it worked, at least from a career and financial point of view, but of course, it was all part of the Hollywood lie. One of Hunter’s closeted affairs was with Anthony Perkins which he first revealed in his 2006 memoir. The affair ended after Perkins secretly went after, and got, the role of Jimmy Piersall in Fear Strikes Out (1957), a part Hunter originated on the TV anthology series, Climax! and wanted to recreate on film. 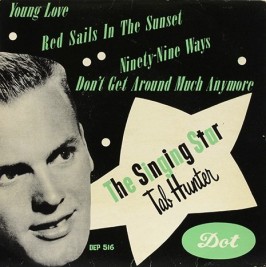 Hunter also had a minor career as a singer. His biggest hits being Young Love (1957), which managed to kick Elvis out of the number one spot on the charts, and Jealous Heart (1958). Hunter’s boy next door, pop music image was, like his movie image, an antidote to film stars like Brando and Dean and to wild rock and rollers like Elvis, Little Richard and Jerry Lee Lewis, that parents hated. He was a sign of things to come in the early 60’s with other  boy next door type pop stars such as Bobby Rydell, Frankie Avalon, Fabian and Bobby Vee.

By the 1960’s, Hunter, never consider seriously as an actor, was looked at as a relic of the aging Hollywood studio establishment. His career tanked. An ill-conceived TV sitcom (The Tab Hunter Show) began a downward spiral into B films (Operation Bikini, Ride the Wild Surf and Birds Do It, the latter starred Soupy Sales) and guest spots on television series. He had a brief resurgence in the 1980’s with cult films like John Water’s Polyester and Paul Bartel’s Lust in the Dust. There were a few other low budget flicks, but by 1992 Tab Hunter’s film career was over.

The film is based on, or really an extension, of Hunter’s 2006 tell all memoir, co-written by Eddie Muller. It was produced by Allan Glaser (Lust in the Dust, I Am Devine), directed by Jeffrey Schwarz (I Am Devine, Spine Tingler! The William Castle Story) and is narrated by Hunter himself. There are plenty of talking heads (Robert Wagner, Clint Eastwood, George Takei, Connie Stevens, Debbie Reynolds), archival footage and a few home movies. 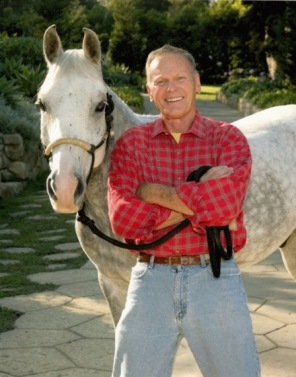 There was an irony to Tab Hunter’s entire career. A gay man that became a teenage heartthrob to millions of teen girls. As he makes clear throughout the film, he was uncomfortable with the teenage idol status to millions of girls, as well as attempts by others to make him an icon of the gay community. Despite his opening up, his honestly, on film, he’s a private person. He has settled into a happy life with his long term partner (Allan Glazer) taking care of his horses and living a peaceful content life. He rediscovered his roots in his religion (He is Catholic). He comes across as a happy man at peace with his life and the world. I came away from the film liking the man a lot.

FilmRise provided a review copy of this film.

Tab Hunter Confidential is available as a Blu-Ray and DVD.