Brian De Palma admittedly has been tapping into Alfred Hitchcock since his earliest works going back as far as Murder a la Mod in 1968. However, many other filmmakers have drawn inspiration from or just plain copied the master of suspense over the years including Henri-Georges Clouzot (Diabolique), Jonathan Demme (Last Embrace), Francois Truffaut (Mississippi Mermaid), David Fincher (Panic Room), D.J. Caruso (Disturbia) and  Woody Allen (Match Point) just to name a few. It’s difficult to make a suspense film without leaning at least a bit on the master.  De Palma’s second foray into Hitchcock’s world came in 1973 with Sisters. After a series of low budget independent films: the previously mentioned Murder a la Mod, The Wedding Party, Greetings and Hi Mom! De Palma signed up with Warner Brothers to make the social satire, Get to Know You Rabbit. Creatively and financially it was a dud. 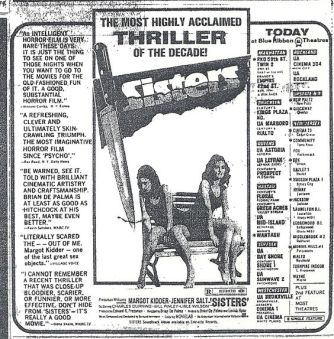 After the failure of his experience working with a major studio, De Palma, with the help of producer Edward Pressman, got a deal with American International Pictures (AIP) to make Sisters. It was, based on an original story by De Palma with a screenplay by De Palma and Louisa Rose. De Palma came up with the idea after reading a 1966 Life magazine article about two Russian Siamese twins. The article describes the two girls as well adjusted when they were young, however, as they got older, psychological problems developed in one while the other remained quite normal. The story spurred De Palma on to write what would become Sisters. In a 1973 interview with Richard Rubinstein (1) De Palma admits the film has “many structural elements” in common with Hitchcock’s Psycho and with Polanski’s Rosemary’s Baby.

De Palma did not want to make just another low budget slasher film. He wanted to create a horror film that would also be an art film. He wanted a film that audiences who were more inclined to attend a foreign art film than a horror film would actually come see. He would do this in two ways. First, by cinematically creating a style that was more European in style than Roger Corman or A.I.P. generally produced. Second, by playing mind games with the audience.  Like Hitchcock in Psycho, he would get the audience to identify and be sympathetic toward Margot Kidder’s character, then pull the rug out from underneath them.

De Palma’s films have always, even in the very beginning, contained plenty of dark humor. This is true in Sisters and would continue in later works. Another recurring theme that began in his earlier works was voyeurism (Hi Mom! Greetings, Body Double, Dressed to Kill). In Sisters, De Palma uses both of these devices right in the opening scene that takes place in a locker room. A blind woman (Margot Kidder) starts to undress. She’s unaware that standing nearby is a man watching her. Suddenly, the frames freezes and we are looking through a keyhole. We discover this is a TV game show called Peeping Toms (think Candid Camera with sex) and the woman, Danielle, hired by the show, is a model/actress. Three contestants have to guess what the man, who in not in on the gag, will do. Will he tell her he’s there or will he just continue to watch? The man turns out to be a voyeur as he keeps silent and watches.

The man’s name is Phillip Wood (Lisle Wilson).  Danielle’s gift for being a good sport on the show is a set of cutlery (more about that later). Phillip’s parting prize is a dinner for two at The African Room. They begin to flirt a bit and end up sharing the dinner prize. However, at the club, Danielle’s strange ex-husband, Emile (William Finlay), who she claims follows her everywhere causes a ruckus. Phillip gets the ex-hubby tossed out of the club. He then offers to drive Danielle home which turns out to be way out in Staten Island. Outside her place they run into the husband again who seems to be stalking Danielle. Phillip fakes leaving Danielle’s apartment causing the husband to leave for the night. With hubby out of the way, Phillip heads back to Danielle’s place where he spends the night.

Early the next morning, Phillip is awaken by the sound of Danielle arguing with her twin sister, Dominque. It’s their birthday today and Danielle explains Dominique is jealous of her relationship with  men. Low on her medication, Danielle asks Phillip to go to the pharmacy and pick up her pills. On the way back, he stops by a local bakery and buys a birthday cake for the two girls. Upon his arrival back at the apartment, he lights some candles on to the cake. He takes the cake, and a knife, over to Danielle who is still sleeping. He wakes her up. Suddenly, Danielle picks up the knife and begins to repeatedly stab Phillip. Bleeding profusely, he manages to drag himself over to a window where, in his own blood, he writes out HELP.

De Palma at this point switches to a split screen for the first time in the film. The second half of the screen introduces us to Grace Collier (Jennifer Salt), an ambitious newspaper reporter for a local newspaper who is looking out her apartment window. She’s located across the street and can see straight at the apartment where the murder has taken place. The split screen works not only to see a nosey neighbor watching what’s happening, but as a smooth transition in main characters. For the rest of the film, our main character transfers from Danielle to Grace.

Grace calls the police. She has had a contentious relationship with the law due to a series of anti-law enforcement articles she previously wrote for her newspaper. When they all arrive at Danielle’s apartment, there is no dead body to be found. Danielle’s ex-husband, and we learn her doctor, who has steadily been keeping a close eye on Danielle arrived at the apartment before the police and cleaned up the bloody mess. He gets rid of the body by stuffing it into Danielle’s convertible couch. When the police arrive, along with Grace, they find nothing to suggest there has been a murder. The police conclude Grace is a desperate reporter looking for a story. Grace decides to investigate the murder herself. She hires a private investigator name Larch (Charles Durning).

Ever the dark humor cineaste, De Palma’s humor are on display throughout the film. The knife used to stab Phillip to death is one of the cutlery Danielle received as a parting gift for appearing on the TV show. While Emile is cleaning up, stuffing the dead body into the couch, he slips and falls on the dead man’s blood that is all over the floor. Another bit of dark humor happens when Grace, in Danielle’s apartment with the police, discovers the birthday cake with two names written on top which disputes Danielle’s claim to the police there is no one else in the apartment. As she brings the cake out from the kitchen to show the police, she too slips and falls destroying the cake and the evidence.

Our private eye has been following his own leads. A moving van has taken the couch in question from the apartment. The P.I. follows. Grace meanwhile follows a lead to an insane asylum where she is held prisoner by the crazed Dr. Emile. He both drugs her and hypnotizes her, the latter completely erasing the murder from her mind.

In the druggy hallucinatory sequence, reminiscent of Polanski’s Rosemary’s Baby, Emile attempts to rid Danielle of her split personality disorder using Grace as a Dominque surrogate. The camera zooms into Grace’s eye. During this dreamlike surrealistic sequence Grace becomes Dominque and we learn that Danielle became pregnant by Emile. Dominque’s violent reaction was to attack her sister causing her to lose the baby. There’s a Dali like version of the separation operation with the doctor using a meat cleaver to separate the sisters. Finally we see Danielle/Dominque stabbing Emile and killing him. In the process, Danielle frees herself of her dead sister, but now is incarcerated for murder.

Grace survives, and the police investigation on the first murder is reopened. She is now living in her old room at her mother’s house recovering from her ordeal. The police question her on the murder. Her only response is the programmed words Emile fed her during the hypnosis, “There was no body, because there was no murder.”

Larch, our not too bright private eye, remains ever vigilant on the trail of the couch, now in Canada, but with no results. We are left with an unsolved murder.

The films does owe a lot to Hitchcock. Danielle’s split personality, keeping her dead sister alive in her head, reflects shades of Norman Bates and his mother.  We also have a major character who is killed off early in the film, just like in Psycho. In an interview on the Criterion DVD, De Palma said he wished he had the budget at the time to use a big star like Sidney Poitier in the role of Phillip, the first victim. Finally, there is the use of a Bernard Herrmann score which at times sounds eerily close to Psycho’s. There are additional references to other Hitchcock films: amateurs playing detective (Vertigo, Rear Window), psychiatry, (Spellbound), a victim’s body hiding in plain sight (Rope). Jennifer Salt’s character’s first name is Grace which could be a subtle reference to Hitchcock’s favorite blonde, Grace Kelly.  This all said, those who would write off De Palma as a minor league Hitchcock are missing a lot. De Palma is a visual master with the camera. Film is a visual medium and De Palma’s camera is his paint brush. His use of slow motion, lyrical long takes and flowing action sequences are both memorable and provocative brush strokes in his cinematic palette.

This post is part of the Dual Role Blogathon. For more excellent posts in this series click on the link below.