The Victors has had a long history. Released in 1963, it was quickly pulled and edited, then released back out to the public. Since then the film has been hard to find and when it has been available, there have been multiple edited versions. It’s been a film I have been wanting to see for many years. Recently, a local cable station showed the film on Memorial Day (I wrote this a few months ago and never published it) giving me the chance. Which version I have no idea, but it did not disappoint.

The film follows one American platoon over the course of the war as they make their way toward Sicily, then on to France and eventually Germany. There’s no plot or storyline. It’s episodic, a series of sequences connected by actual newsreel footage. Time passes, years go by as we see the men go through the dehumanizing experiences of war.

Unlike most films about war, The Victors has few  battle sequences. It’s mostly about the after effects of the battle. People, soldiers and civilians,  both physically and mentally deformed by war. I will discuss a bit more about three of the most powerful sequences. The first involves a squad of American soldiers walking down a road. They come upon a group of recently released concentration camp  prisoners. In a still powerful and emotionally moving scene, one of the former prisoners kneels down in front of a solider and kisses his hands in gratitude. A second sequence involves the execution of an American Soldier for desertion(1). It’s Christmas time and during the execution Christmas songs ironically play on the soundtrack. The third involves one soldier, portrayed by George Peppard, who comes to visit his old Sgt. (Eli Wallach) at a military hospital. When he enters the hospital room, he find the Sgt. brutally disfigured. It’s the hard facts look at the spoils of war. All three scenes are brutal and it was surprising to me considering film was released in the early 1960’s.

Is this film anti-war? Well, it certainly does not glorify war. It does get a bit heavy handed, still you get a harsh realistic feel for what these men go through. It’s a life filled with dirt, mud, sleeping wherever you can find a spot and above all the harsh brutality of war. This is not a John Wayne let’s go get ’em boys glorified version of war.

War is dehumanizing and this is nicely reflected in a harrowing sequence that takes place toward the end of the war. A young new troop, played by Peter Fonda, picks up a stray dog that he wants to keep. The more hard bitten soldiers don’t want it around. They keep kicking the dog out of their way. The young soldier keeps bringing him back. When the troops eventually pull out, the dog is at first left behind. As the soldiers continue to pull out in their trucks, we see the dog left in the distance looking on sadly. One of the harden troops tells Fonda  to go ahead and call the dog. Fonda happily whistles for the dog to come. The dog, excited, start running toward the truck. Another soldier coldly picks up his rifle and shoots the dog down.

The film ends on a downbeat note which I won’t reveal. It’s amazing this film was made in 1963. You’re left emotionally drained with the knowledge there are no winners in war, only damaged, dehumanized survivors.  As choppy and disjointed as it may seem at times, which may to due to the severe tampering that was done by the studio, this film is one of the most powerful and emotional anti-war films you will ever see. 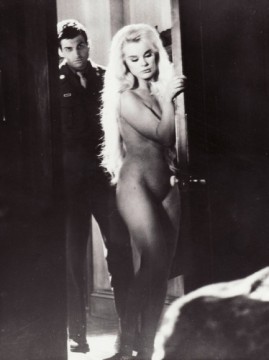 The cast is large with Vince Edwards, George Peppard, Eli Wallach, Albert Finny and Goerge Hamilton among the men. The women include Melina Mercouri, Elke Sommers, Romy Schneider, Senta Berger and Jeanne Moreau. It was directed by Carl Foreman, his only directing assignment, Forman was better known as a screenwriter (High Noon, MacKenna’s Gold and The Guns of Navarone)  and producer.

To this day, The Victors has never been released here in the U.S. on VHS, DVD, Blu-ray or any other home format.

(1) This is probably based on the execution of Eddie Slovik, the only American soldier executed  during World War 2.