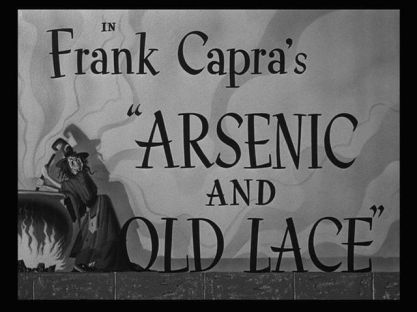 Arsenic and Old Lace is the story of two sweet and charming elderly sisters who happen to be mass murderers. It’s a delightfully hysterical farcical comedy with some dark overtones.  Perfect for this time of the year and especially on Halloween.

Based on Joseph Kesselring’s  Broadway smash hit play which opened in January 1941 and ran for more than three years, the story centers around drama critic, Mortimer Brewster (Cary Grant), who just married his sweetheart, and pastor’s daughter, Elaine (Priscilla Lane), who live next door to Mortimer’s quirky spinster aunts in Brooklyn. Happily, the newlyweds  want to share the news with their respective families.

The two aunts, played by Josephine Hull and Jean Adair recreating their stage roles, are sweet little ladies who rent out a room in their home to men, all who have a couple of things in common. They are single, lonely, have no family and soon end up poisoned and buried in the ladies basement of their house. It’s not that the two ladies are cold hearted murderers, no it’s just the opposite. They are compassionate, they feel sorry for these poor lonely souls. Sympathetic, they offer each perspective tenant a glass of elderberry wine, that happens to be laced with poison. Soon the gentlemen are no longer lonely. They are dead.

Living with the aunts is Mortimer’s brother, Teddy, who thinks he is Teddy Roosevelt. He spends his time blowing his horn as he charges up the stairs, imitating Roosevelt’s charge up San Juan Hill in the Spanish-American War, and digging “locks” down in the basement  for future use as the sisters do their best to rid Brooklyn of its lonely man problem.

Into this mix of fun loving crazies enters another Brewster, the not so loveable Jonathan (Raymond Massey), a badly scarred murderer, thanks to a botched plastic surgery by his alcoholic partner, Dr. Herman Einstein (Peter Lorre). They are on the run from the law and also have another dead body of their own to add to the collection in the basement. The sisters strongly object. You see, their victims were all nice gentlemen while Jonathan’s  victim is a stranger  and a foreigner.

While Jean Adair, Josephine Hull and John Alexander all recreated their roles on screen, the most famous actor in the stage version, Boris Karloff, who played Jonathan,  did not. Adair, Hull and Alexander were all given time off from the play to go to Hollywood and do the film. Karloff was still a big star and a draw for theater audiences. Unlike the others, he was not given the time off. Though the film was made in 1941, it was not released to the public  until 1944. Part of the agreement with the play’s producers was the studio would not release the film until after the play closed.

The story of Arsenic and Old Lace is based on a true crime story and is told in fascinating detail by Jacqueline T. Lynch over at her excellent blog, Another Old Movie Blog. Click here to read.