Young Peter Bogdanovich was an obsessive film lover watching over 400 films a year. In the days long before home video, this was an especially impressive count. Peter keep a file of 3×5 index cards with notes on every film he watched. In his twenties, while acting, directing and producing various theater productions including an off-Broadway production of Clifford Odets, The Big Knife, with Carroll O’Conner, Bogdanovich met Dan Talbot. Talbot, owner of the legendary New Yorker Repertory Theater on the Upper West Side of Manhattan, recently began programming classic films. Peter lived only a few blocks from the theater. In exchange, for free admission to the theater, Bogdanovich offered to write program notes for the films Talbot was showing. They had an agreement. 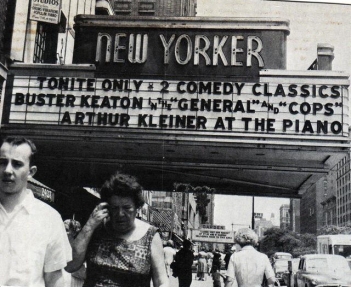 While Peter saw many films in his youth, they were mostly current films of the day. His time at the New Yorker introduced him to classic Hollywood and film directors like Alfred Hitchcock, Howard Hawks, Fritz Lang and John Ford. He was influenced by film critics Andrew Sarris (Village Voice) and Eugene Archer, second string critic at The New York Times. Both men were disciples of Cahiers Auteur theory which gave forth the ideal the director is the true author of a film. Talbot was also responsible for Bogdanovich’s introduction the French New Wave. Directors like Jean Luc –Godard, François Truffaut and others.

During the early 1960’s Peter, while still trying his hand in live theater (acting, directing producing), became a programmer at New York’s Museum of Modern Art where he wrote film notes and eventually monographs on some of his now favorite directors: John Ford, Orson Welles and pioneer filmmaker Allan Dwan.  At the same time, he wrote articles for various magazines and met and married his first wife, Polly Platt. The couple soon moved to Los Angeles where Bogdanovich continued to write articles for magazines like Esquire. In 1965, the couple met Roger Corman.  Corman was familiar with Peter’s writing and asked if he would be interested in writing a screenplay for him. The screenplay he and Polly began to work on, The Criminals, was never made, however, Corman asked the couple it they wanted to work on his new film. It was called The Wild Angels. When Bogdanovich asked doing what, Corman responded he didn’t know. The couple ended up doing a bit of everything including rewriting the script, directing second unit, editing and scouting for potential locations. 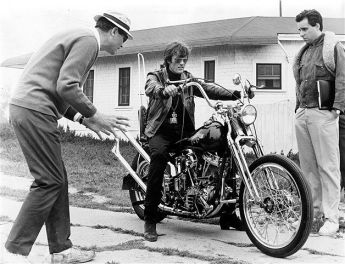 Around this time Bogdanovich and Platt also worked on a few other low budget projects for Corman including The Trip and Voyage to the Planet of Prehistoric Women. The latter, started out as a Russian science fiction film that Corman purchased the rights to. Similar to what producers did with Godzilla, Corman asked Peter and Platt to write a screenplay incorporating the Russian footage and  newly shot footage with the likes of Mamie Van Doren in the cast, creating a loopy film about astronauts who land on the planet Venus, inhabited by menacing creatures and sexy women dressed in skimpy clothes.

After completing this science fiction ‘classic’ Bogdanovich and Platt were given another project. Corman had made a film with Boris Karloff called, The Terror, co-starring a young and unknown Jack Nicholson. The producer/director still had a contract with Karloff. The actor still owed Corman two days more of work. Never one to lose money or an opportunity, Corman wanted Peter and Polly to come up with a story where they could shoot about two days’ worth of new footage with Karloff. Take about twenty or so minutes of outtakes from The Terror and then add another half hour or so of new footage with new actors for the new story. Put it all together and come up with a new film that Corman could headline as starring Boris Karloff. That film would become Peter Bogdanovich’s first real directorial effort.

By the late 1960’s, the Vietnam was unraveling the country more and more. One of the consequences was a rise in senseless murders. The most infamous at the time happened in Texas, in 1966, where University of Texas student, Charles Whitman, climbed up to the observation deck of the main building on campus with an arsenal of weapons and began shooting. He killed 12 people and wounded 32 others before being shot and killed himself by the police. This horrendous incident became the basis of the film that would become known as Targets.

For Targets, unfortunately, the timing of the release was bad, August 1968. With the recent assassinations of Martin Luther King and Bobby Kennedy still on everyone’s minds, Paramount, who purchased the film from Corman, nervously released it only in a limited release and then dumped it (I saw it at the time at the Trans-Lux East on New York’s Upper East Side where it played for a short period). Because of the recent assassinations, the film became something of a shout-out for gun-control advocates, but most people just ignored it because of the disturbing subject matter.

I wrote about the film a while back and you can read my review by clicking on the link below.

Targets did launch Bogdanovich’s career a film maker. His next film, The Last Picture Show, a film I will cover in a future article, became one of the 1970’s seminal works.

Yule, Andrew, The Life and Times of Peter Bogdanovich