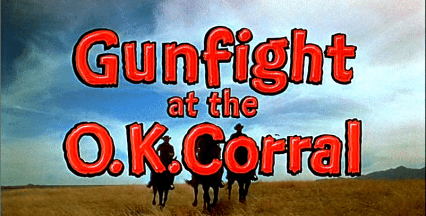 One of the earliest films depicting Wyatt Earp, Doc Holiday and the gunfight at the OK Corral was a 1932 work called Law and Order. While the character’s names were changed, the film told the tale, fictitious as it was, of the infamous Tombstone shootout. Since the making of that film there have been numerous others detailing, correctly or incorrectly, generally more the latter, the story of the battle between the Earp Brothers and the Clanton’s’ at the OK Corral. In 1939, there was Frontier Marshal with Randolph Scott as Earp and Cesar Romero as Doc Holiday. According to Jon Tuska in his 1976 tomb on the Western film (The Filming of the West), it was this script that was given to John Ford and was used as the basis for his My Darling Clementine. In either case, both films were far from the truth. Ford’s film, though he claimed to actually have talked to Wyatt Earp, is a romanticized version. It’s beautifully painted with wonderful scenes of Monument Valley (nowhere near the real Tombstone) and Henry Fonda is a cool, aloof Wyatt Earp (nobody does aloof better than Henry Fonda). Ford’s west was always more about what the west should have been and not how it really was. In both My Darling Clementine and Frontier Marshal, one of the most obvious changes from facts was that Doc Holiday who was a dentist became surgeon even operating on his lover. In 1955, Joel McCrea portrayed Earp in Wichita. Then 1957 director John Sturges brought the Earp/Holiday legend to life in Gunfight at the OK Corral. [1] 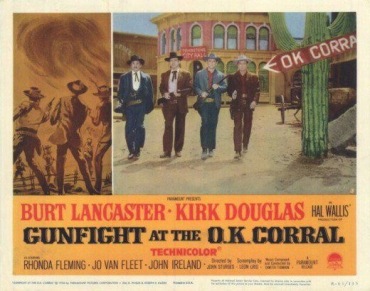 Producer Hal Wallis had optioned an article by George Scullin that appeared in Holiday magazine in 1954. Scullin’s article, The Killer, told the story of Doc Holiday including the infamous gunfight. According to Scullin, Holiday was a nasty piece of work. Along with being a drunk, he was a racist who very few people could stomach.

Despite Wallis and Sturges attempts to present a more honest tale, they hired Leon Uris to write the screenplay, the film still only flirts with the truth.  The film still lands more on the side of fiction than truth. That said Sturges did make a, rip roaring, big budget western with two of the biggest stars in Hollywood at the time, Kirk Douglas and Burt Lancaster. It was their second film together, the first being the 1948 noir, I Walk Alone.

Kirk Douglas and Burt Lancaster made five films together. In addition to the two mentioned, there was The Devil’s Disciple (1959), Seven Days in May (1964) and Tough Guys (1986).[2] The two stars became good friends off screen too. By 1957, both men became not only major stars but producers as well, Lancaster by then, even directed. Subsequently, they both yielded a lot more power than they did back in 1948. This was reflected in many discussions they had with director Sturges on how they wanted to portray their characters.

Gunfight at the OK Corral is a good looking production with both Douglas and Lancaster making the western legends larger than life. Lancaster’s Earp is a morally righteous character who has a reputation for cleaning up towns while Douglas plays Doc Holliday, as a man who goes from one town to another gambling and drinking himself to any early grave. Doc’s girl, Kate (in real life she was known as Big Nose Kate, Kate Elder), is played by Jo Van Fleet. Their relationship is one of love/hate with Kate doing most of the love and Doc the hate. Van Fleet came from the Method school of acting. In one scene, Douglas had to slap her hard. Van Fleet had to get into the moment of being an abused woman and told Douglas to slap her for real. She needed to feel the pain. Douglas, in his autobiography, writes about how he “hauled off and wacked her.” Van Fleet felt the pain. Lancaster, who was on the set, stood there stunned. No matter the pain, the scenes between Douglas and Van Fleet are edgy and some of the best in the film. 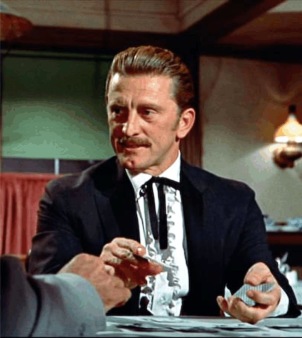 Douglas’ Doc is full of swagger always willing to live life on the edge, unlike Lancaster’s Earp who is more pragmatic and rigid. Val Kilmer might have picked up some of Douglas’ Doc Holiday traits years later when he played the tuberculous ridden gunslinger in George Cosmatos’   Tombstone (1993). Both are a far cry from Victor Mature’s version in Ford’s My Darling Clementine.

There are some other nice performances from other cast members especially from Dennis Hopper who played a young Billy Clanton. The film was a big hit at the time, more than doubling its two million dollar budget. The title song sung by Frankie Laine was also a chart maker. Overall, it’s not a great western, no more accurate than the many Earp/Holiday/Clanton films that came before. If you want accuracy or at least a more accurate version watch Tombstone or Wyatt Earp. That said, Gunfight at the OK Corral is an entertaining star driven film by two of Hollywood’s greats and that’s what makes it worth watching.

[2] Kirk and Burt also appeared on stage together back in 1981 in the premiere production of The Boys in Autumn in San Francisco. The two icons portrayed Tom Sawyer and Huck Finn as old men. They played to sold out performances despite the plays lukewarm reception from critics.

The post is part of the Shadows and Satin’s Kirk Douglas 100th Birthday Blogathon. Click on the link below to see the full lineup of participants.