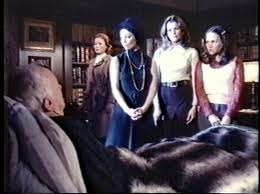 Perry Como introduced this song back in 1954. It rose to number 8 on the Billboard charts and since has become a standard during the Christmas season. The song celebrates the joys of people everywhere heading home to be with family and friends for the holidays. For the Morgan family in the 1972 film, Home for the Holidays, a long time in coming family reunion, is not exactly the kind of family dynamics the song or most of us would celebrate.

Ailing Benjamin Morgan (Walter Brennan) summons his four alienated daughters’ home. It’s Christmas but he’s really doesn’t care about that. Benjamin is dying. He’s convinced his second wife and former lover, Elizabeth (Julie Harris) is slowly poisoning him in order to get her hands on his estate. A few years back, Elizabeth, then Benjamin’s lover, was accused of killing Benjamin’s first wife, but the death was ruled  a suicide. Now, instead of calling the police, as any sane person would do, and letting them know what’s going on, Benjamin calls his daughters back and demands  they kill Elizabeth. Good old Dad! 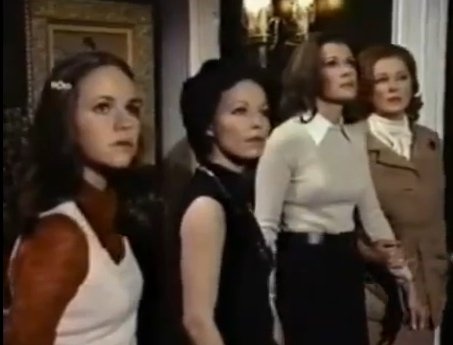 The four daughters are Alex (Eleanor Parker), Frederica (Jessica Walter), Joanna (Jill Haworth) and Chris (Sally Field). They are an eclectic group: Alex, the oldest has been the one always with the responsibilities of looking out for everyone else. Frederica resolves her inner struggles with her mother’s untimely death by indulging in drug and alcohol abuse. Joanna is a flighty party girl type with multiple marriages already behind her, and the youngest, Chris, is the innocent little sister. There is no love lost between cranky Pop and his girls. His parenting and cheating left a lot to be desired. That said, they are not going to kill Elizabeth, though it seems Joanna wouldn’t mind going that route. Benjamin and his daughters do have one thing in common; they are all convinced or at least suspicious that Elizabeth may be poisoning dear old Dad.

It gets worst for the Morgan family when two of the sisters are soon murdered. Flighty Joanna who seems to hate everyone, is the first after she quickly decides to leave and is murdered by an unknown raincoat wearing killer.  Frederica “drowns” in the bathtub with a bottle of booze nearby. Was it an accidental drowning? Was it stepmother Elizabeth? Maybe, it was someone else?

The believability factor is on the low side. For example, the idea that these four actresses could be sisters is hard to fathom. Especially, Parker and Field whose age difference is more than twenty years. In fact, just one year before this film was made Parker and Field played mother and daughter in Maybe, I’ll See You in the Spring. There are other problems too, such as you most likely will be able to guess who the killer is about halfway through.

That said, the film has a nice eerie  atmosphere and there’s plenty of the standard horror stuff, the kind that goes as far back as the 1930’s, to keep you entertained. There’s the isolated family farm cut off from the world, in this case thanks to a severe thunderstorm that last practically throughout the film. The  only road in and out is washed out. The lights eventually go out and of course telephone lines are cut, all leading to a moody sense of danger and remoteness. 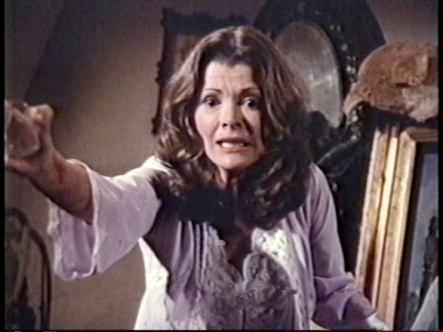 While the film has an amazingly good cast for a TV film, the rewards here are mostly for the film’s camp value, particularly due to the over the top performance by Jessica Walter as the pill popping/alcoholic/nightmare driven Frederica. She is well over the top, almost from the very beginning to her untimely demise. It’s well worth watching just for Walters camp award winning performance. On the other side, is Julie Harris who is outright creepy as Elizabeth. She makes the thought of her preparing the Christmas dinner downright spooky.

Released in 1972, this ABC Movie of the Week, like its big screen sister, Silent Night, Bloody Night released the same year, is a precursor to a small sub-genre of future Christmas horror/slasher films that would be arriving in the future: Black Christmas 1974, Don’t Open Till Christmas 1984 and Silent Night, Deadly Night 1984 among them. Maybe not everyone one’s idea of holiday spirited films but certainly an alternative.

Home for the Holidays was written by Joseph Stefano. Though best known for adapting Robert Bloch’s novel Psycho to the screen for Alfred Hitchcock and as producer and writer many episodes of The Outer Limits. Stefano had a prolific career in television writing for such shows as Mr. Novak, Marcus Welby M.D., The Detectives, The Magician and Swamp Thing as well as TV films including Psycho IV: The Beginning, A Death of Innocence and Revenge. Film work included Futz, Eye of the Cat, The Naked Edge and Black Orchid. Home for the Holidays was directed by John Llewellyn Moxey (The Night Stalker, A Taste of Evil, The House That Wouldn’t Die as well as many, many TV shows).

This is my contribution to Classic Film and TV Cafe’s MOVIE OF THE WEEK BLOGATHON. You can read more finely tune contributions by clicking on the link below. BTW Many of these films are available on YouTube.