One of the earliest films about the American involvement in Vietnam is the little known A Yank in Vietnam (1964). The film was directed by and starred Marshall Thompson. It was made in Vietnam before the escalation, the large buildup of American troops, and the anti-war fever back at home. Produced during these early years of the conflict, the film is free of all the political baggage that came only a few years later.  As the American involvement in the war grew and the war became more and more unpopular at home, Hollywood saw Vietnam as a hot potato to be avoided.

The only films made during this time, except for the appalling John Wayne bore, The Green Berets, were low-budget independent films portraying Vietnam Vets as all crazed wackos. You get the impression that anyone who fought in Vietnam was a psycho or returned a psycho. Films like Russ Myers’ Motor Psycho (1965) where a motorcycle gang is led by a disturbed Vietnam Veteran. There was Peter Bogdanovich’s debut directorial effort, Targets (1968), the best of this group, dealing with a crazed Vietnam Vet who shoots his mother and wife then goes on a shooting spree atop a storage tank. In 1970, came The Losers, a film that’s premise dealt with the unbelievable setup of an American motorcycle gang who are recruited to go into Cambodia to rescue an American diplomat! Of all the films from this period, the most famous and best was Martin Scorsese’s brilliant dark neo-noir, Taxi Driver (1976) where ‘Nam Vet Travis Bickle, an insomniac, takes a job driving a cab at night trolling the nasty, decaying streets of mid 70’s NYC because that’s when “all the animals come out…” He goes on “Someday a real rain will come and wash all this scum off the streets.”

In the middle of this early cycle came what would turn out to be Elia Kazan’s next to last film, The Visitors. Unlike his final film The Last Tycoon, this was a personal work close to his ideological heart.   I first saw The Visitors upon its original release in 1972 and remember it being attacked by the critics. Thematically, it touches base with other Kazan films, particularly with On the Waterfront. The Visitors was a stripped down, low budget, non-union project shot in 16mm. The screenplay was written by Elia’s son, Chris Kazan. The actors used were all unknown at the time. Kazan did this purposely to help keep the audience in the dark about how the film would end.

The film’s minimal location takes place on an isolated property in Connecticut on a cold, snowbound January day. The land is owned by Harry Wayne (1), portrayed by Patrick McVey, the father of Martha Wayne (Patricia Joyce), who lives in one of the two homes on the large property. Martha and her lover, Bill Schmidt (James Woods), a Vietnam Veteran, along with their recently born child live in the other home.  Harry is a former best-selling writer of westerns and a severe alcoholic who has little use for Bill who he sees as not rugged enough for his western macho tradition or his daughter. 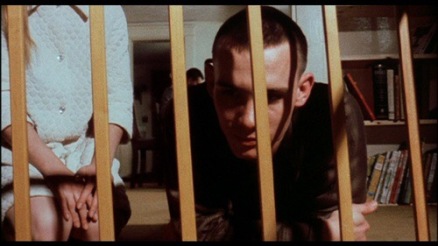 Their insulated world is invaded when two former war buddies of Bill’s pay a surprise visit. Sarge (Steve Railsback) and Tony (Chico Martinez) have been locked up in a military prison for the past two years. In Vietnam, Sarge, Tony, and Bill were in the same platoon. During a patrol, Sarge and Tony participated in the raping of a young Vietnamese’s girl. When they finished with her, Sarge kills the girl. Bill did not take part in the attack and later on testified against the two men at their trial which led to a jail sentence in Leavenworth.  The two were released after serving only two years due to a legal technicality. Through their lawyer, they found out where Bill lives and decide to pay him a not so friendly visit.

Tony tells Bill, he has no hard feeling about the past. It’s obvious early on, Sarge does not feel the same way. He’s sullen, moody and on edge. Bill never told Martha about the incident in Vietnam or the trial that followed nor his participation in the latter. She welcomes the two into their home. Harry takes to the two visitors also, who he sees as rugged, macho, real men as opposed to his daughter’s pacifist boyfriend. Together the three get drunk, watch the Super Bowl and ridicule Bill.

The two visitors slowly encircle their prey like animals: pacing, baiting, waiting, preparing for their retribution. When it comes, it’s swift. Sarge flirts with Martha who seems receptive to his come-ons. Bill notices this and a fight breaks out with Sarge beating Bill up badly. He then goes after Martha, smacks her around and rapes her. The two men satisfied with their success of Bill’s humiliation and defeat hop into their car and leave. Bill makes his way over to Martha asking her if she is alright. She doesn’t answer as the film ends.

Thematically, the film is close to earlier Kazan works particularly with Woods character who “squeals” on his buddies channeling Brando’s Terry Malloy in On the Waterfront as well as Kazan’s naming of names before the House of Un-American Activities. Steve Railback’s moody Sarge is a direct decedent or link to James Dean’s Cal Trask in East of Eden

The Visitors deserves more attention than it has received, though it remains a mixed bag. It’s no hidden masterpiece, but it does have its pleasures. It reflects both Kazan’s strengths, his rebellious loners, as well as his weaknesses, his continued attempts to justify his cooperation with HUAC. The film is notable for being both James Woods and Steve Railsback first films. They both deliver wonderfully tense and strong performances. Unfortunately, Patricia Joyce was a weak choice; she’s not bad, but she does not express enough of the needed sympathy in her role as Martha.  The film’s ending which was considered shocking back then is tame by today’s standards making it lose some of its dramatic value. Visually, the remote snow filled, cold location adds a nice feeling of dread that one feels is coming throughout the film.

(1) One has to ask if the use of the name Wayne was a subtle reference to western legend and pro Vietnam War supporter, John Wayne.