An almost forgotten film from the mid-1980’s, Heaven Help Us is a wonderfully executed coming of age story. While the film will definitely strike a chord with Catholics, I can say honestly it will speak to almost anyone who was once a teenager, and that’s all of us.

The film is effective thanks to a pitch-perfect screenplay, its flawless use of music and  set design that captures the period of the mid-1960’s. The script is by Charles Purport who was born and raised in Brooklyn where the film is set. Heaven Help Us is not just another in a long line of nostalgic look back, teen sex filled romps, but a wonderfully painted mosaic at a certain point in time and place. It’s filled with both the humorous and the painful moments of growing up; the discovery of learning who you are, the discovery of the opposite sex and first love. The film has a natural flow between humor and serious moments that will ring true and give it a sense of depth lacking in most coming-of-age stories.

Directed by Michael Dinner, Heaven Help Us is such a vividly realized coming-of-age story with a Catholic school setting that I’m sure it will hit home with the survivors of a Catholic school education. The soundtrack which includes songs by The Temptations, (My Girl), Junior Walker and the All Stars (Shotgun), Marin Gaye (Ain’t That Peculiar), Sam the Sham and the Pharaohs (Woolly Bully), Bobby Vinton (Blue Velvet) and much more, is effectively  used supplementing the particularly insightful script. It brings the 1960s to life and will make you feel nostalgic even if you never lived through those times.

Michael Dunn (Andrew McCarthy) is a transfer student to St. Basil’s all boys Catholic School. He soon befriends the school’s misfits from Kevin Dillon’s Rooney, the tough guy and smart ass to Malcolm Danare’s Caesar, a genius and the butt of Rooney’s immature boorish wrath. Also part of the group is the school’s masturbating champion Corbet, portrayed by a young Patrick Dempsey. The school is run by Brothers, led by the headmaster, Brother Thaddeus (Donald Sutherland). Also along for the ride are new arrival, Brother Timothy (John Heard) and the sadistic Brother Constance (Jay Patterson) whose secret weapon is a paddle board with the name Patience on it, used to swat kids into submission and knock any independent spirit out of them. Catholic schools at the time had two purposes, to educate and to instill conformity.

Early in the film, there is an assembly; a gathering of the school’s students in the auditorium. Brother Constance has a small hand held clicker that he uses to notify the boys when to stand and when to sit during the ceremony. It’s the same method used to train dogs or other pets. Well, one of the boy’s brings his own clicker to the assembly, and after Brother Constance uses his clicker for the first time to inform the class to rise from their seats, the boy sounds off with his own clicker. Soon the entire class is jumping up and down like hundreds of jack-in-the-box puppets in a battle of the clickers. In another scene, during swimming class, the boys are all standing next to each other, naked, remember it’s an all-boys school, as Brother Paul (Philip Bosco) rants on about being physically fit because soon they will all be fighting off the Communists. Fear of communism was a standard philosophy back then preached by both the government and religious leaders. The Commies were everywhere; under our beds, in our toasters and probably in our microwaves (if you believe Kellyanne Conway). 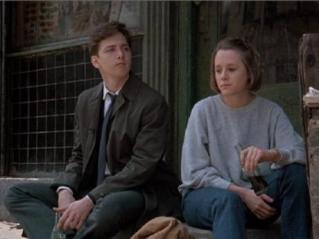 There is also a nice, sweet, first love subplot between Andrew McCarthy’s Michael Dunn and Mary Stuart Masterson’s Donni, a girl who helps her father at the local candy store where all the kids hangout, generally smoking and joking around. Back then, there were candy stores, fountain service type stores all over and definitely one near every high school. They were hangouts for kids after school, and sometimes during, if classes were cut. One scene has two of the Brothers doing a surprise raid of the candy store one afternoon when the store, packed with kids, boys, and girls from the local girls’ high school, smoking, cursing and hanging out. I have read that this kind of thing really did happen where the Brothers or Sisters as it may be, would do secret invasions into neighborhood stores breaking up these hangouts.

The film is centered by the performances of Andrew McCarthy and Kevin Dillon. McCarthy may have the girl, but Dillion gets some of the best lines. Watching Elvis’ Blue Hawaii, singing the Hawaian Wedding Song, at a movie theater, he yells out in a thick Brooklyn accent, “What did they do to Elvis, cut his balls off or something?” In another scene, Caesar, in trouble with one of the Brothers tells Rooney, “I’ll reason with him, I’ll appeal to his better nature.” Rooney, replies, “Oh, you’re gonna reason with a grown man in a dress.”  At times though, Dillon’s character is a bit hard to like these days due to his continuous use of homophobic slurs that he spills out as putdowns.  One does have to remember the times the film is set in. It was common back then. Not saying it was right, but it was done; similar to the ways black people were portrayed in films for so many years. McCarthy and Masterson’s together give the film its most poignant moments. Finally, there is the always reliable Wallace Shawn who has a small role as a priest.

Corporate punishment did happen in Catholic schools, but let me state not everywhere with every teacher. I have read accounts of people who had endearing relationships with Nuns they loved and learned from, then again, I have read about all those rulers that students received across their knuckles. There’s a very entertaining one person show Off-Broadway play, called Late Nite Catechism that hysterically deals with this. It still travels around the country. I saw the New York production in the late 1990’s appropriately set in the basement of a church on West 46th in Manhattan.

On a personal note, and to give you an idea of how times have changed, I want to mention that I was raised a Catholic. When I came of age to begin attending school, my parents attempted to enroll me in a Catholic school. The problem was the parish we belonged to, the Church of the Nativity, located in what is now considered the East Village in Manhattan, did not have a school. My parents tried to do the next best thing, enroll me in a neighboring church that did have a school. They received a resounding no!  My family did not belong to that parish, they were told. Subsequently, I could not attend their school. I was enrolled in Public School and that was where I remained.  Today, Catholic Schools will take in any children from any neighborhood, denomination or religion. Catholic Schools have changed as the society has changed.

Heaven Help Us is the rare coming-of-age movie that is heartfelt and real, capturing the times and place perfectly with a nice touch of nostalgia and full blown characters. You don’t have to have gone to Catholic school or be Catholic to enjoy and feel this film.