In a 1993 interview with The New York Times, Martin Scorsese talks about the influence Murder by Contract had on the then teenager. “It’s an example of an American B-movie that is 100 times better than the film it played with on a double bill.” He then went on to explain, “The film it was playing with when I saw it was ‘The Journey,’ by Anatole Litvak, with Yul Brynner. That film had nice color, but when ‘Murder by Contract’ came on the screen, it was surprising and lean and purposeful, and not like anything my friends and I had seen. Afterward, we talked about it on the street for days. When I saw it again years later, I was overwhelmed by the severity of the style, which was dictated by the budget.” Scorsese later said in the interview how he put a clip from the film in ‘Mean Streets, ‘ but he had to remove it out of the final cut of the film because it was too long. 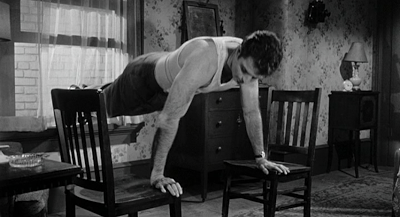 Vince Edwards stars as Claude, a cool-headed, detached hitman with a Zen-like demeanor. He sees things without any distortion or illusion. He lives in a meditative state of mind. Claude is a regular guy with a straight-laced job making only about 75 dollars a week. Not enough for him to purchase the house that he wants. He decides on a career change, one that will provide a lot more money, as a hitman. He completes a few minor jobs for a low-level boss named Mr. Moon. For one of these jobs, Claude poses as a doctor in a hospital in order to cut off the life support of his intended victim. Considering, Edwards’ future role as Dr. Ben Casey in the 1960’s TV series there is certainly an unintended knowing irony in this scene that will make fans of the medical show smile.

Successful, and having proven how smart he is, the big boss, a Mr. Brink orders Claude to kill Mr. Moon, the man who hired him. No problem for Claude, as long as the money is right. 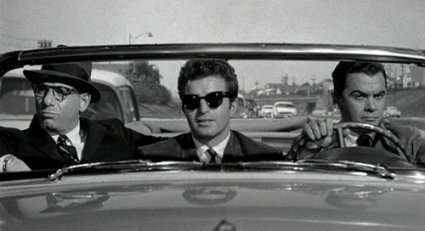 The hitman is now given more important assignments. He is sent to Los Angeles to knock off a high-profile witness in the federal trial of a big time mob boss. When his target turns out to be a woman (Caprice Toriel), Claude recoils, not because she’s a female, but because he finds women are less predictable; they are always moving. It takes more planning. He should have asked for double the money.

In Los Angeles, Claude is met by two contacts, Marc (Phillip Pine) and George (Herschel Bernardi) hired to keep an eye on him. They are not too bright and find Claude, an odd duck. Never having been to Southern California before, Claude tells his two babysitters he wants to see the sights for a few days. The two men want the job done quickly. There is only eighteen days before the trial is to begin. Cool, calm, confident, Claude is unperturbed telling the boys he wants to see the Pacific Ocean. More than a week goes by before Claude decides it’s time to go to work. The job turns out to be more difficult than he thought. His first plan fails as does the second. She’s too well protected by the Feds. Claude decides he wants to call off the job. He wants out. Marc and George tell him that’s not a good idea. The big guy, Mr. Brink, back east won’t like it. They will all end up dead. 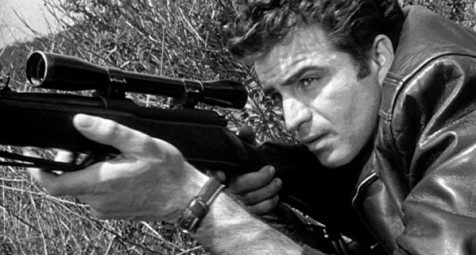 There is one scene where Claude’s calm, meditative cool breaks. The painstaking, precise killer is given a dirty cup for his coffee at a hotel.  A perfectionist, he berates the hapless waiter who serves it to him for having the gall to provide a dirty cup. Joe Mell, plays the unfortunate waiter, standing before Claude with a dumb like, helpless expression. The scene works well because it reveals a crack in the assassin’s seemingly unruffled veneer. Eventually, realizing the effect his verbal explosion is having on the poor befuddled waiter; he tosses him a five-dollar tip.

If the film has a weakness, it’s the unsatisfying ending which is unconvincing and seems rushed. But don’t let that deter you from watching this low budget gem. There’s more good than bad including an unusual acoustic guitar soundtrack by Roger Botkin that I found reminiscent of the then recent Italian neo-realism work going on at the time. Visually, the film is atmospheric and moody thanks to cinematographer Lucien Ballard. Ballard already had an extensive list of films to his credit, Buchanan Rides Alone, The Lodger, Berlin Express, and The Killing among many others going back to 1930. He would also have a long career after this film including, The Sons of Katie Elder, True Grit and had a impressive collaborative working relationship with the great Sam Peckinpah working with him on The Wild Bunch, The Ballad of Cable Hogue and The Getaway. The film’s director, Irving Learner, would work with Vince Edwards again the following year in another low budget crime film called, City of Fear. He would also worked with Edwards on multiple episodes of Ben Casey.